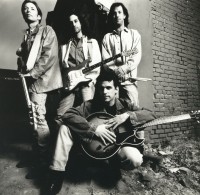 The saying, 'A band that prays together, stays together' is quite applicable to Big Tent Revival. This grammy nominated quartet from Memphis made a strong impression with their eponymous debut album. On their second, 'Open All Night', Big Tent Revival proves to be a band with a definite style of their own, a bluesy, edgy guitar rock sound with hooks aplenty thanks to the songwriting talent of singer/guitarist Steve Wiggins. BTR do up to 250 live performances a year, a gruelling schedule by anybody's standards. I met the band in Nashville. How were they finding, I asked, life on the road?

"It is very difficult", admitted Steve. "But one of the things we do as a band is that we are committed to pray together. We all have our personal Bible studies as well, so we remain focussed and to realise this is why we are here, this is why we do what we do. And the reason is Christ. That is the focus."

Every member of Big Tent Revival has a prayer partner in the band that he is committed to pray for. Commented drummer Spence Smith: "It is a blessing to be accountable to each other. A lot of people have expressed some concerns with me back home. Maybe I don't have a church every week because I'm on the road so much and I have to explain to them that these three guys are the family that I am accountable to. That is basically my church family, because we have church every day with each other."

Big Tent Revival prays for several things. Said Steve," Every band member has committed to pray for another band member and then also the record companies and crews and different things. We see God working mainly in our personal lives. If I'm having a problem with something at home, maybe my wife isn't feeling well about me being gone, then we can pray about it. I can see a change in her life because of the prayer."

Said guitarist Randy Williams, "Sometimes it's hard to stay focussed when you're gone so much. Every day it's the same schedule, you get to the place you're going to play, you go to the hotel and that's every day life for us. Sometimes it's easy to concentrate on those sort of things, what you're doing during the day, and sometimes you tend to forget you're out here to minister and not feel like you're working.

Steve Wiggins is the founding member of Big Tent Revival. Prior to forming the band, he made a self-titled solo album for Sparrow. At the time, Steve was touring on his own and accompanying himself on acoustic guitar. But Steve discerned his audience felt cheated when they found out he wasn't playing with a band. Evangelism was very much at the heart of Steve's musical outreach. Playing only a few dates a month, caused him several times to go to a street corner, take his guitar and sing his songs there.

I asked Steve to discuss the new album, 'Open All Night'. "It was inspired by the constant touring that we have done through the last year and the fact that we've truly been Open All Night, sometimes even driving all night," answered Steve. "So all of the songs were derived through the pains and pleasures and the bad times that we've had over the last year, just centering on the touring we've done and the things we've seen. Musically, the record is more cohesive than the previous one. I would say it is more band-oriented. This album is us. It is us in the studio playing together.

Despite all their focus on the spiritual needs of the US of A, BTR have not developed spiritual blinkers. The band sponsors a child in the Dominican Republic. Recently they visited that country. It made quite a big impact on their lives. "Compassion International is basically a child sponsorship programme where people can sponsor children in need in third world countries," explained Steve. "We went down there to meet the child we are sponsoring and talk to him and his family. It was very sad, you know his mother makes 30 dollars a month and with that she has to feed four children and herself, so obviously without the money that we give through Compassion International her kids wouldn't be able to go to school or eat three meals a day, or have clothing or things like that."

Steve continued, "I have never seen such great poverty in my life. I have been in townships in South Africa, I've been to Jamaica, but the places I have been in the Dominican Republic were the most poor that I have ever experienced. It's just showed me that out here in the world, some of us are making a living. We don't feel like we are making enough, we would make more. It showed me that it's really the opposite. We have more than we really need to survive. God has blessed us so that we can turn around and bless others as well. What it did show me is that we have so much, that in order to be happy you don't have to have things, all you need to have is Jesus."

I concluded by asking whether it made any sense for the band to be back on stage, in front of screaming fans... Responded Steve, "Yeah, it seemed easier to tell in a concert, which is "show" and which is true ministry. But there are times when people really need to be entertained, so we continue to provide that entertainment. At the same time, it made us even more focussed on the ministry side of what we do."