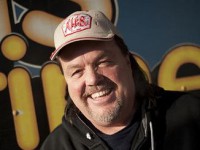 Blaine Bowman from Ohio recently released an instrumental album, 'Among Friends'. What it clearly demonstrates is that this veteran musician and preacher is an extraordinarily versatile guitarist able to play soft jazz, western swing and on the nine minute 57 seconds "A Really Long Blues Song With Friends" electric blues. Said Blaine, "I wrote 12 original songs and most of them are easy listening jazz. There was a band that used to come to England a lot in the '80s - do you remember Koinonia? Hadley Hockensmith who played guitar for Koinonia is one of my number of influences in my life. You'll hear overtones of some Hadley, because I love that style, Spanish style - most of them are in that jazz feel."

Jazz, Southern gospel, rock, comedy, veteran Bowman is a true musical eclectic - with a Master's degree in church history - whose own history stretches back to the early days of Jesus music. Blaine grew up in a musical home. He reminisced, "My dad loved country music; he'd play a little bit of harmonica, my mom played some guitar. I started taking guitar lessons when I was eight and piano lessons close to the same time. I grew up with that influence but I was trying to rebel against the church and the Lord, trying to get away from things, and running with some pretty bad crowd, first part of high school. Something happened in July of '71. My mom drove me out to Denver, Colorado, to a big charismatic meeting. There was like 300 young people there, and this band from Los Angeles was playing, AndraÃ© Crouch and The Disciples. The Lord used him to get a hold of my heart. I grew up in church, but when people ask me how long I've been a Christian I say, 'Since July of '71.' That's when I had my encounter with the Lord."

Blaine began travelling in 1972 as guitarist with a band from Dayton called One Way Express. A year later he and his sister Diana formed a group, Blaine Bowman & The Children Of Light. They released two independent albums, 'It's Great Right Now' in 1975 and 'It's The Name Of Jesus Christ'. Jesus music expert Ken Scott wrote about these albums, "Ohio folk rockers' homemade affair, smooth and easily digested for the most part, a tad feeble vocally, atoned for by recurrent twinges of garage via crude electric fills and rare but well-timed use of wah wah tremolo and distortion upping the anti."

In 1977 Blaine Bowman & The Children Of Light released a third album, 'I Want To Say'. Scott described the album cover of the group sporting "blue suits for the guys, shiny red gowns for the ladies" which may have had something to do with the group moving away from Jesus music folk rock and into something closer to the Gaithers and Blackwoods-styled Southern gospel. Also in 1977 Blaine married Christine Moxon who played piano and sang. In her teens Christine had started playing for the Roger Noble Singers and later the Southern-aires Quartet. Children Of Light finally called it a day in 1980. But Blaine and his young wife continued to do music. 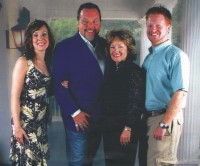 Said Blaine, "In 1980 my wife and I went out by ourselves as a duet. I played the bass then; she played piano. Then our children came along, Tiffany in '84 and Luke in '85, and by the time the early '90s came around we were teaching them. They took off as a bassist and a drummer. I play a little drums - enough to get our son started. Our daughter plays bass. Now they're 31, 32 years old and they're excellent musicians. They track with me on recordings."

Blaine had started preaching in 1973 and alongside those engagements his family group would often accompany him on the road. Musically they covered all bases and were what Blaine calls a "variety group" with pop, rock, blues and R&B mixed in with their Southern gospel, country and bluegrass. Their eccentrically packaged independent albums like 'Songs We Love', 'Give Me A Heart Like David' and 'The Picture Tells All' had the unwieldy billing of Them Bowmans & A Band Called Treemendus. Blaine explained: "My ministry corporation is called Treemendus Ministries. Many years ago I heard a fella say, 'Our life is tremendous when his tree mends us.' For a little span we took on a band called Treemendus, but it was in the years of Them Bowmans and it didn't last. We had a bus for many years, and the bus had in big letters, H I S, and a picture of Jesus in the top of the H, smiling; so it's his good time band. I figured if my children grew up - and they have: they've gone their separate ways, still help us on a part-time basis - I'll have a name that can work for whoever's on the stage. As long as I'm on the stage, it still works as Blaine Bowman's Good Time Band. It was all the same thing."

"We superimposed it onto a picture of the back of our bus on the record. That record is exactly what you said. It's funny, it's serious - some parts make you cry, some parts make you laugh. Some of them aren't spiritual at all, they're just fun. We have always used humour. I have always appreciated ministers who weren't so stiff and stuffy. If you look at Jesus' ministry, the only people he ever made mad were the religious people. I guess I wanted to share with people in the way that ministered to me when I was young. AndraÃ© Crouch was the innovator. Where I'm from in the middle of the United States, church music was organ music or old Southern gospel quartet - which I love, but it's all I knew. So we always do something in every concert that gets people to laugh to get their attention. The way I figure is if they're not listening, there's no use to be up there. So we do something to strike their thinking and get them laughing. Plus, the Bible says in Proverbs 17.22 that the merry heart is good like medicine."

Blaine spoke about his preaching ministry. "I was ordained by a council of 10 ministers at a church back in 1978. I've been credentialed with a group out of Iowa, Open Bible Churches, for 34 years. I kid about it. They leave me alone and I leave them alone. They're real sweet about me going where God leads me to go - any kind of church, any denomination, and 20 percent is outside the church walls. I went back to school about 15 years ago - a wonderful school down in Jacksonville, Florida, the Logos Christian College correspondence. I finished my Bachelor's, and then I went ahead a couple of years later and got a degree in church history. But it's just God's Word: I try not to get in the Word to preach but to feed."

There's no sign that Blaine will be retiring from ministry any time soon. "My wife and I are still doing 175 to 200 meetings a year. We're still doing the band with our children. I give them the dates and say, 'I'd really like you to be with us.' We take it outside the walls, do biker rallies and county fairs, cowboy churches. They say, 'We can come on this date, this date, this date.' We're going to do 20, 25 concerts this year with our band, which I love; but most of them will be my wife and I."