Bleach: The rock band move from Forefront to Tooth & Nail

America's BLEACH are back in the CD racks. Mike Rimmer spoke to the band's Sam Barnhart.

Bleach were part of that whole wave of new bands that exploded onto the American scene back in the mid '90s that included label mates Grammatrain and Skillet who filled the post grunge rock'n'roll gap. Three strong albums in the '90s on Forefront took them to the fore in the US with Christian radio hits like "Super Good Feeling" and "Code Of The Road", and then...silence. Only with the re-emergence of the band on Tooth & Nail Records has the truth finally come to light. Band leader and founder member Sam Barnhart confesses that they very nearly called it a day. "We were kind of at a crossroads in 2000. Our original drummer had decided to leave because he was getting married and so we just didn't know what we were going to do. Dave Baysinger and I decided we were going to do a farewell tour and that was going to be it. But God had other plans for us. So we are still here today!"

Over the last couple of years the remaining original members have added brothers Milam and Jared Byers on guitar and drums and Jerry Morrison on guitar. The fresh blood has added a new impetus to the band. Sam reflects, "It's been the most amazing last couple of years for us and I'm so grateful that we didn't throw in the towel. We just needed to look and say, 'God, is this still what you want? Is this where you need us anymore? Are we just doing this out of our own desires, or is this still something that you can use us in?' He just kept coming back almost full-circle saying, 'I'm not done with you here yet!' So here we are today still!

"The band have taken their time to settle into things choosing to write songs, tour and play together a lot before recording the album. I think the new guys have definitely pushed us in our songwriting. The one thing that everybody knows about Bleach is that it isn't Sam and Dave. It's Jerry, Jared, Milam, Sam and Dave, we're five. Just because Dave and I have been in it a bit longer, doesn't mean that it's our band. So it's been cool to have those guys as writers, who add a different kind of perspective to our writing. They've definitely brought a different kind of development that we've never had before. It's a pretty exciting time for that. This is pretty much what Dave and I always wanted to do but we've never had five guys before, who are on exactly the same page. It's always been that a couple of us would be here and a couple more would be there. So to have everybody on the exact same page, musically and spiritually and lyrically... everything was like, 'Wow, this is how it should be!'"

Listening to 'Again For The First Time' one thing is very striking. The sound of the new album is very catchy. It rocks but it's catchy! Sam agrees, "That's one thing that we definitely are about. We love big pop hooks, big choruses and big guitars. I personally think that those things were brought to the surface more than they've been able to be on previous records. Hopefully too, that just comes with maturity in writing and understanding more about songwriting." 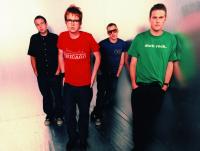 That maturity in songwriting shows on some of the new material. Sam explains, "There are definitely moments on this record that are probably deeper than anything that we've ever talked about. At least certainly in the way that we've worded them. So I definitely think songs like 'Broke In The Head' and 'Knocked Out' are very meaningful but hopefully there's been maturity in the way that we've written. We always want to be growing in that."

The band changed to Tooth & Nail as they have a vision to take their music beyond the walls of the Church. Sam explains, "Tooth & Nail are known for pushing their boundaries outside of that. But I don't want to downplay what Forefront has done for us by any means. They were a good label for us while it lasted."
The change in label does mean that the band have gone from being one of the heaviest rock acts on Forefront to become one of the lightest acts on Tooth & Nail. "That is kind of odd!" Sam laughs. "We've always been the weird guys on Forefront! Now, we're pretty much the pop guys on Tooth & Nail, which is very cool!"

Sam concludes our conversation by reflecting on the band's journey. "We've been around a while man! I'm so proud of that fact. The fact that God allowed us to stay around this long, to keep doing it and hopefully, allowed us to continue to be relevant. It's a pretty awesome thing. It's such a fresh time for us."

Never has an album title been more apt as Bleach have released the 'Again For The First Time' album summing up the energy and passion of the band.

I'm the girl from Agape Music Festival that the lead singer was waving at, he jumped out into the crowd to crowd surf in the area where some of my friends and I were. I was wondering if you guys still make music or do concerts? I lost track of Bleach...

hey everyone! i found myself browsing online and stumbled across this article. after reading this it brings back tons of old memories as i grew up listening to bleach. in march of 05 me and some band buddys spent the week haning out in tennessee and stayed at sams house. it was a great trip full of unforgetible memories, such as the aaron mars bennifit show. it is these memories that encourage me to keep going. i thank God for the influence Sam and all of Bleach has had on my life, and can only hope that i can be that type of influence on the world today. God bless, Andy Sweerin.

For more on Bleach visit the Bleach artist profile