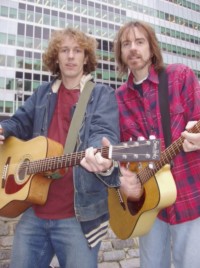 I chanced to see on Cross Rhythms website that the two Halligans, Coventry's Rob and the USA's Bob, were to do a gig in Edinburgh's Acoustic Cafe, alias St Martin's Church of Scotland in the east end of the city. So I happily made my way to this commodious wood-panelled venue and mingled amongst the friendly though predominantly middle-aged/elderly audience. This was the first in the current UK tour by this duo, each of whom has a considerable CD output to his name. Additionally, some of the songs of Bob H, frontman of American folk group Ceili Rain, feature on various compilation discs - his infectious "That's All The Lumber" gets a regular airing on one such compilation in my possession. Meanwhile, I recall seeing Rob H sing a memorable rendition on Songs Of Praise back in 2007. The time since then has been a busy one for the singer/songwriter. He released two albums in 2008; one alongside Welsh acoustic musician Gareth Davies-Jones. A tour by Halligan and Davies-Jones - just six months ago - accompanied that release, and that, too, had its debut performance in this same Acoustic Cafe.

The two Halligans aren't physically related; one of them, discovering the other online, decided to get in touch. A friendship developed, while they also found they really liked each other's music. They made the decision to team up for the present tour. While they have rather differing musical styles, their output undeniably serves to complement each other's, making for a genuinely interesting and enjoyable music set. One main connection between the two is that each of them writes non-cliched, thought-provoking songs that are full of originality. Rob H delivered a varied set, accompanying himself (and his colleague) on guitar, while occasionally playing his white, cubic sit-on-drum. With a subtly Christian theme, one or two of his songs directly challenge the doubter/agnostic. Another couple were essentially love songs, such as the recently-penned "Innocence", themed on the beauty of his wife's eyes, and the lighter "Blue Jeans", the latter a Cross Rhythms radio turntable hit from his album 'Best Thing That's Happened'. Most poignant of all was Rob's best-known "Streets Of This Town", written shortly after 9/11, during which, as many know, Rob's father was among the many people whose lives were snatched away.

The music of Ceili Rain may have a definite Celtic flavour, but little of that comes over on Bob H's solo repertoire which, in particular, tends to comprise quirky, upbeat folk-pop tunes with truly infectious melodies a bit like '70s singer/songwriter Dean Friedman at times, othertimes more akin to CCM musician Matthew Ward. Countless others, of course, have been attracted to this unassuming artist's songwriting abilities, and Bob has composed tunes for as varied a clientele as Cher, Michael Bolton, Jennifer Rush and Judas Priest! Choice of songs on this set included "I Don't Need A Picture (To See Your Face)", the congregational-participatory "You, Then Me, Then You, Then Me", and the initially gentler and deeply inspiring "Live Like A King", title taken for an inscription beneath a poster of Christ in a New York subway. Bob's keyboard skills are formidable, not least on the latter number, and his vocal sound is versatile. A thoroughly enjoyable evening.

Gareth Davids-Jones is Irish, not Welsh. Don't worry you're not the first to make this mistake.

i went to the gig in rugby in the baptist church. i thought it was a really good gig like you said to diffrent styles of music but they seemed to work together very well.

hey both are very tallented singer song writers. robs
"cubic sit-on-drum" is called a cajon its a pritty cool insrument.

Tom- Many thanks for your kind words! Was grand to meet you & I hope our paths cross again soon....blessings...BHjr