Bread Of Stone: The Iowa-based pop rockers with a heart for the poor of Indonesia

Sioux City-based Bread Of Stone are not your run of the mill pop rock band. For a start, the band founders were born in Indonesia. Secondly, it was the father of band members Ben and Bill Kristijanto who had a call from God to start a music ministry even though Ben and Bill couldn't play music instruments at the time! Today Bread Of Stone, consisting of Ben Kristijanto, vocals; Bill Kristijanto, guitar; Tim Barnes, bass; and Wesley Holt, drums, are one of the busiest touring units on America's Christian music scene and their third album 'The Real Life', re-released through Dream Records, is selling well.

Ben explained the origins of the band's name, "We believe we were stones before being called into music ministry (useless and incapable) and only because of Jesus are we made into bread to feed the hungry in this world and share his love with others."

They openly admit that when Bread Of Stone started "we didn't know anything about music." Ben continued, "We didn't know you get a producer to produce your songs and then get a CD. So what we did do is we became the producers. We built a studio. We didn't know anything and we wanted to know how everything worked. It was just the Spirit of the Lord guiding us through every step of the way."

In 2006 the band released the independent album 'Broken Vessels'. A year after that Bread Of Stone recorded their second album 'Letting Go'. Wrote Cross Rhythms, "This is an accomplished and varied set and an excellent showcase for so promising and spiritually committed a band." 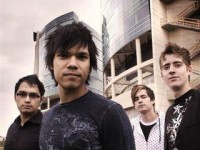 Bread Of Stone toured the USA tirelessly with numerous CCM big hitters, including Newsboys, Seventh Day Slumber, Superchick, Petra, Building 429 and Sanctus Real while also engaging in ministry trips back to Indonesia. Said Ben, "We have felt the calling to spread to love and blessing of Jesus Christ to those in need. We have a ministry in Indonesia called The Light Project that began by ministering to "Scavengers" (people who make a living by rummaging through trash to find recyclable goods) and has grown into a ministry that reaches and seeks to empower those who are not afraid to share the gospel! You can find out more about this ministry at www.lightourworld.org." The band have distributed over 85,000 free copies of their 'Letting Go' and 'Broken Vessels' throughout the Muslim-populated country.

On 30th October 2012 BOS released 'The Real Life' independently. Indie Vision Music enthused, "'The Real Life' gives listeners a reminder that the life we have been given ought to be lived with its main purpose to serve the one who gave it. God has given these men an avenue to speak into people's lives and these 10 songs of hope do just that. From the first radio single 'Hold On' that encourages listeners to hold on to the promises that God has shown and told us to the poetically challenging the life this is a great indie album full of intense passion, enthusiasm and encouragement."

The response to 'The Real Life' attracted the attention of major Los Angeles-based Christian label Dream Records who have re-released the project in a Deluxe Edition. Explained Ben, "The Deluxe Edition was our way of sharing a few new songs without making everyone wait. We felt the new songs we had fit well with the message we wanted to portray with the rest of 'The Real Life'. We added two brand new songs and three remixes!"

Ben spoke about a single "Goodbye World" from the project. "While I was writing the song I was thinking, What is it about Christ that made the disciples drop everything and follow after him? We believe it's simply the love of Jesus that made them forget about themselves. All the struggles and oppositions that they faced, were nothing in comparison to the powerful love that they experienced. We hope this song serves as an encouragement and a reminder for us to set aside our ambitions and always having things go our way, and to say 'Yes, Lord. I will follow you.'"

Inspiring to learn of Bread of Stones ministry to "the scavengers." For these young singing servants to have a heart for the little and the lowly moves me to learn more about them. May God shower their ministry with joyous success, both materially and especially spiritually.