Brennan Manning: Healing our image of God and ourselves

Cross Rhythms '97 is privileged to be giving a platform to American author and speaker Brennan Manning. Here Brennan looks at misconceptions we have about whom God really is and his love for us. 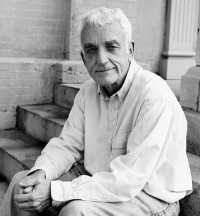 Over the past 15 years my ministry has been identified, more than anything else, with healing our image of God. Teachings on the unconditional love of God, Abba, Father, have aimed at dispelling illusions and myths and helping people to experience the God of Jesus Christ. This, I believe, is the main business of religion. Religion is not a matter of learning how to think about God, but of actually encountering him.

Losing our illusions is painful because illusions are the stuff we live by. The Spirit of God is the great unmasker of illusions, the great destroyer of icons and idols. God's love for us is so great that he does not permit us to harbour false images, no matter how attached we are to them. God strips those falsehoods from us no matter how naked it may make us, because it is better to live naked in truth than clothed in fantasy.

Still, there is a chronic temptation to reduce God to human dimensions, to express him in manageable ideas. Human reason seeks to understand, to reduce everything to its own terms. But God is God. He is more than a super human being with an intellect keener than ours and a capacity for loving greater than ours. He is Unique, Uncreated, and Infinite, Totally Other than we are. He surpasses and transcends all human concepts, considerations, and expectations. He is beyond anything we can intellectualise or imagine. That is why God is a scandal to men and women - because he cannot be comprehended by a finite mind.

Jesus calls us to stretch our minds and hearts, to renounce human standards of justice, mercy, love, rectitude, and fair play. For a disciple of Jesus the process of spiritual growth is a gradual repudiation of the unreal image of God, an increasing openness to the true and living God. In my own life, honouring the First Commandment, 'I am Yahweh your God: you shall have no gods except me', has meant repudiating the god of fear and wrath handed on to me by preachers, teachers, and church authorities in my youth, repudiating the strange god who sees all non-Christians as good-for-nothings, who consigns all heathens to hell, who has given any one denomination a bonded franchise for salvation. It has meant repudiating the strange god who flinches at gracing certain other churches with his presence, who despises a beleaguered couple who practise birth control, who forbids a divorcee the Eucharist, who ordains that some of his creatures (whether for race or creed or some other reason) shall be denied equal opportunity for employment and housing, who tells married Catholic priests they are excommunicated, and mature women that in America they can be vice-president of the country but in the church they must sit down, submit, and shut up.

This same spiritual process of repudiating unreal images of God can be found in the writings of the Hebrew prophets and in the work of spiritual formation that Jesus undertook with his first disciples. Because they had fashioned their own image of the Messiah, they resisted the mission of the real Messiah, asking him impatiently when he would triumphantly reveal his power to Israel. They looked for an unreal messiah of their own making and found a real one of God's making - but only after they were dispossessed of all their illusions and expectations. Expectations are our subtle attempts to control God and manipulate mystery. We can get so wrapped up in them that when Jesus breaks into our lives in new and surprising ways, we neither recognise him nor hear his message.

What was the message of Jesus concerning God? What did he really preach? What did he really reveal? Modern Scripture scholars tell us that if we want to be most confident that we are in touch with the original preaching of Jesus, we should turn to his parables - quick, decisive stories that make clear the fundamental points to his teaching. For our present purposes two will suffice:

First, in chapter twenty of Matthew, the parable of the crazy farmer. It was harvest time and the owner of the farm went repeatedly into the marketplace, the hiring hall of his day, to recruit workers for his fields. Given the time of year and the amount of work to be done, those who were still idling the day away with small talk at the eleventh hour must have been a lazy and shiftless bunch. Still, the farmer needed workers and even they were called into the field.

One presumes they took their time getting there, shuffled about, and did a minimum of work. Then the surprise: they were awarded a full day's pay! In this familiar parable as told by other rabbis of Jesus' day, those who arrived at the eleventh hour earned the whole day's pay because they worked extra hard. In Jesus' version, however, the emphasis is not on the diligence of the workers but on the gratuitous generosity of the farmer (presumably the families of the loafers depended on the income for their nightly meal). It was a mad, crazy, insanely generous act. No human farmer or businessman could behave that way and remain in business for very long. Even today, we are offended by this overpayment of loafers, scroungers. The other workers certainly were. 'The men who came last have put in only one hour,' they complained, 'and you've treated them the same as us, though we've done a heavy day's work in all the heat.' And the farmer's answer: 'My friends, I am not being unjust to you. Didn't we agree on your wage? Take your earnings and go. If I choose to pay the last-comer as much as you, haven't I the right to do what I like with my own?'

Two thousand years later the Christian community is still scandalised by divine generosity. In one of his plays, Jean Anouilh portrays the Last Judgment as he imagines it: the just are densely clustered at the gate of heaven eager to march in, sure of their reserved seats and bursting with impatience. Suddenly a rumour starts spreading. They look at one another in disbelief. 'Look, he's going to forgive those others too.' They gasp and sputter: 'After all the trouble I went through. I just can't believe it.'

Exasperated, they work themselves into a fury and start cursing God. And at that very instant, they are damned. That was the final judgment, you see. They judged themselves, excommunicated themselves. Love appeared and they refused to acknowledge it. 'We don't approve of a Heaven that's open to every Tom, Dick, and Harry. We spurn this God who lets everyone off. We can't love a God who loves so foolishly.'

A parable in Luke 15 makes the same point. The prodigal son walks down the road rehearsing the penitent speech he will give. The father, rocking on the porch, sees him coming and dashes to meet him. The young man barely gets the first sentence of his speech out before the father embraces him, puts a new robe on him, and proclaims a celebration. Hardly an appropriate way to deal with a delinquent son! The boy had been spoiled rotten in the first place; if the father spoils him again, how will he learn?

Haven't you identified with the older brother in this story muttering to himself: 'Wonderful! All this while I've been sweating away, fattening the calf that my father is now going to roast for this idiot. Dad's really off-the-wall!'

The French Easter liturgy says: 'L'amour de Dieu est folie' - the love of God is foolishness. And Jesus says it is a foolishness that's meant to call forth joy. The farmer reproaches those who've worked the whole day because they are not willing to celebrate his generosity. The father is appalled when his older son will not join the joyful welcome-home party. 'God's extravagant love', Jesus is saying, 'demands a joyous response from us.'

Both of these parables are a revelation from Jesus of the real God. But Jesus' image of God assaults our standards of justice and fair play. The very foundations of our religion are being shaken! The depraved good-for-nothing prodigal is preferred to his hard-working brother? Celebration instead of punishment! What kind of lunatic order is this that reverses all rank, making the last first and the first last? At the end all get the same reward?