Brussel Spaceship: Taking the message to the pubs and clubs 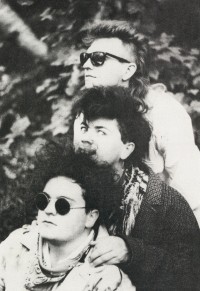 It's always seemed a strange anomaly that those Christian musicians who are the most overtly evangelistic in their aims seem to spend their lives performing in church halls and at events the average non Christian would be highly unlikely to grace with his or her presence...while the pubs and clubs and the everyday music lovers who frequent such places are left for others to entertain.

There are exceptions - artists who see a ministry aspect to their music yet who are not content to remain within the subcultural boundaries. Brussel Spaceship are such an animal.

Main man and original visionary behind the Brussel boys is Ian Stewart. "What we're doing has been a vision for about seven years now, ever since I was 16 or 17 and learning to play the guitar - I felt Cod calling me into forming a full time band, but I thought this was just what everybody feels, wish-fulfilment or whatever. But it was brought home very clearly when I was playing with a worship band. The woman who was leading it had a prophetic ministry and she took me aside and said 'I feel Cod's saying to you that you'll be like a Pied Piper in music - it's not going to be worship music but you're going to be doing this and it's going to be for God,' and blah blah blah...and that confirmed what I was feeling and so I followed it through."

After a couple of years at Oxford Poly where he led worship and debuted an early incarnation of Brussel Spaceship, Ian felt ready to go full-time with the band in 1 988. They were duly prayed for and officially launched by their church in Chichester and began a punishing schedule of gigs on both the Christian and mainstream circuit. These have included appearances at Spring Harvest, Greenbelt and the Glastonbury Festival, often working alongside evangelists; playing the University and college circuit and London clubs like The Rock Garden and rock pubs like the Mean Fiddler and the Sir George Robey; and doing schools, prisons and youth work up and down the country. Truly a band for all seasons.

Brussel Spaceship are a three-piece, with Ian on lead vocals guitar and effects board, Andy Hunt on bass and 'sea-horse' hairstyle (that's what it says in his bio, honest) and Michael Randon on drums and affable personality. In fact they all seem pretty affable chaps - if they were playing wimpy MOR music they'd probably seem too affable by half (why does mediocre music seem to make some people so cheerful?) As it is, their rock music is tight and persuasive and occasionally hilarious and they have no problem holding their own musically in any company. Put influences as diverse as Dave Lee Roth, Rush and Edie Brickell in the Brussel blender and what comes out is a melodic guitar-fuelled power-pop sound ideal for a wholesome mosh. Combined with what those in the trade call "strong visuals" (they're not appallingly ugly and they jump around a lot) they're hoping the Spaceship formula will take them all the way.

"We'd like to play at Wembley Stadum" Ian tells me, without a hint of false modesty. "Not because we want to be stars" (of course not) "but because there's more people there and the more people who hear the gospel...We'd like to see people saved in the middle of the set. We'd like to have a sound crew who are all Christians and who are evangelists as well - similar in a way to what Stryper are doing except with the sort of music that we're doing and in an English way instead of a Californian way. We'd like to see loads of other bands doing what we're doing, but we've found very few who are going into pubs who are evangelistic and who are keeping their credibility - we just haven't found them."

This is obviously a source of frustration to Stewart, who says that Brussel Spaceship will "never be big enough" to do all that God wants to do on the pub/club scene. The band have played the Glastonbury Festival which attracts an audience of a quarter of a million, and where a bewildering array of faiths and philosophies are on offer, and saw people converted during their set as they have done during their pub and club gigs. Their theology and outlook could be labelled uncompromising or fundamentalist, depending on your point of view, but just when they run the risk of starting to sound like out-takes from the latest evangelical blockbuster paperback their sense of humour saves the day.

Why do they feel the need to write songs with titles like "Sometimes I Really Miss My Mum" or "In Love With A Pinhead"?

"I think God's got a sense of humour - there's so many things we leave out, people stereotype God. I think He laughs with us; one of the gifts of the Spirit if you read through the Bible is laughter, the release of laughter. We use humour very much, especially working with students. The humour side wins people very quickly, the name Brussel Spaceship makes people laugh. There's no reason behind the name, it's just total nonsense. Everybody tries to make it make sense, but it doesn't. People can relate to it because they can see you're human, you laugh, you cry and stuff. If you can win people's respect then you can preach. If we're in a pub we never preach the gospel unless we've won the audience - unless God very clearly tells us to. We don't want to turn people off to the gospel even more."

The band see this sensitivity to where their audience is at, in terms of being ready to receive a gospel message, as crucial to their pub performances.

"It all ties in with allowing the Holy Spirit to move in what we're doing so we don't become so rigid that the Holy Spirit can't come in. One of our prayers when we go in to pubs and clubs is that God would use the songs that we might have played hundreds of times and anoint them - and that He would use them. We know that the whole prophetic side of tongues, of words of knowledge and of prophecy is what God's calling us into in pubs, but in a way that the people there can cope with - so we don't say 'here comes a word of knowledge' or 'there's somebody here who..' but we might say in between songs 'if you are like so-and-so' and feed a word of knowledge in. I'm talking about stuff that's happened in the last couple of weeks to us...this is the dream we're aiming at."

This aspect of their work has led to the unlikely scenario of the group singing in tongues in a pub. I wondered how the audience reacted to that.

"No problem with it - they don't know what's happening you see. But what happens is the Holy Spirit's released; because there's a dynamic in tongues we don't understand. For example we were playing in a pub a couple of months ago and we were having a really hard time and I felt God was saying to me 'sing out' and I thought 'no way'...But I closed my eyes and sang out this tongue and when I opened my eyes no one in the audience had realised what was happening but the guys in the band were laughing, they thought it was brilliant. Afterwards they said it was at that point the gig was won."

The Brussel spaceship masterplan is fairly unambitious then: merely to sign a record deal with a major label, play at Wembley and usher in world revival. Until that happens their space vehicle will probably be landing at a bar or college near you in the fairly near future. Go along for a close encounter of the heard kind.

Have any of your recordings been put on to CD? I used to have tapes but they have fallen apart. Would love to listen to an updated recording.
follow that rainbow!

Thanks James. A very well written article and certainly representative of our beliefs as a band.

I saw Spaceship a good few times, and remember travelling a couple of hundred miles there and back in an evening, crazy to think that was over 20 years ago! I'm not sure you'd remember me Ian (I used to travel with my brother and friend to see you) but if you ever fancy a pint let me know Ian as I now live in your home town, small world.