Bryan Duncan: The Not So Anonymous Confessions Of A CCM Star

'Anonymous Confessions Of A Lunatic Friend' may not spring readily to mind as an album title, but it certainly catches the attention! BRYAN DUNCAN answers a cry of "What?" from Chris Willman. 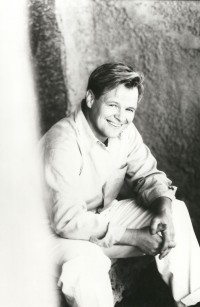 "See you, Devin," says Bryan, Duncan, trying to give his pyjama-clad son, four-year-old Devin, the hint that watching videotapes in the next room with his brother might be preferable to pestering his dad during an interview.

"See you, Bottom," replies Devin, disappearing around the corner.

"He's into bodily things," explains Duncan, "He uses the term bottom a lot. He's not supposed to. He'll be punished later. See, I'm the typical dad, kind of the lenient guy. I have a tendency to laugh at that stuff and I shouldn't. Thank God for moms. She knows how to be stern with that kind of stuff."

Duncan probably isn't, in fact, a typical dad, being a well-known veteran gospel singer who's often away on the road and all. Neither was his dad a very typical father. Duncan is the son of a Pentecostal preacher. Yes, this wiry, witty and sometimes slightly irreverent fellow is a bona fide "preacher's kid," which in the evangelical parlance is a term almost as synonymous with dysfunctionalism as "adult children of alcoholics" is in pop-psych secular terminology.

"I've been insecure for a lot of years," admits Duncan. "But that's because I was doing what was expected of me as a good preacher's boy. I don't know where all the pressure comes from. I even left home and came completely across the United States when I was younger, and I think that had something to do with me subconsciously trying to get away from that pressure, leaving my folks in North Carolina to come to California just to get away from that stuff. Sometimes it seems like once you've developed a certain amount of guilt about serving God, that guilt will follow you to your grave.

"But I feel better about who I am now than I ever have, because I've been able to question things that scared me to death - the possibility that everything I believed was a hoax, that it was just my upbringing, my culture, being raised in church. And I confronted a lot of stuff that really made me mad about the way I was raised."

So just how messed up has this out-of-the-ordinary upbringing made Duncan? Very. In fact, he's a complete lunatic. No, wait, it's only his "friend" that's a little crazy, and any helpful advice or counsel this contemporary pillar of the faith might solicit is purely to pass along to this perplexed pal of his.

Confused? Give a listen to the song "Lunatic Friend," the cornerstone song of Duncan's new album 'Anonymous Confessions Of A Lunatic Friend', and you'll begin to understand, and perhaps have a glimmer of self-recognition. It's about how we as semi-together Christians dare not reveal our weaknesses or doubts for fear of patronization or, worse, ostracism. It's the old cliche where someone says, "I'm fine, thanks, but I do have this friend who has this problem." The song builds to a slyly joyful climax in which an entire chorus of apparently suppressed folks gleefully wail, "I've got this lunatic friend," and darn if it isn't just a little cathartic.

"Lunatic Friend" may just be the craftiest song Duncan has ever recorded, on what is certainly the best album he's ever released. It's the sound of a man grappling with modern Christianity and its trappings just as surely as he grapples with the outside world.

The emphasis on the church starts right off with the black gospel-inflected "Sunday Go To Meetin'," which recalls Duncan's delight in Sunday services as a child. "Raised in a Pentecostal church, we were kind of lower middle class back then, and church was like going to the circus," he recalls wistfully.

Going on to the teen years, there's the humorously semi-autobiographical "Mr Bailey's Daughter," which is about doing the right things (i.e., church volunteerism) for the wrong reasons (i.e., impressing girls).

And then the record dips into grown-up criticism and exhortation with lovely, lower-key songs like "We All Need," which movingly addresses the silent struggles of believers in the face of "the sense of impossible expectation" and church intolerance: "I was raised on the blessings in the victory speech/As I fought for the standards that I could not reach/And I hold my tongue when the pain is great/And I cover my tears as we celebrate.../I'm convinced if I stumble he'll just cast me aside/Mock at my weakness, shatter my pride/'cause I've watched as we've stoned the hesitant soul/So we all must remember/It's still God's grace we all need to know."

Growing up a preacher's kid, and coming to maturity as a respected Christian musician, it's not necessarily kosher to be a "hesitant soul," to question the accepted assertions of the faith, be they biblically or culturally based. At least not publicly. And it's frustration with that attitude - an attitude that Duncan feels kept him really growing in God's grace until the last couple of years - that informed the lyrically edgier moments of Anonymous Confessions.
"I thought I was gonna shoot myself in the foot on this record. It's not real comfortable to really look at the down side and really say something honest that's not glazed over. I probably could have come up with a real bitter-sounding, frustrating record if I didn't have a few people like the Dan Posthumas of the world helping me balance it out."