Bryan & Katie Torwalt: Maybe another "Holy Spirit" on the way with 'Champion' 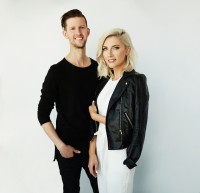 Katie: I think a big part of this album has been that perspective that we no longer fight for victory but we actually live our lives in the victory of what Jesus Christ did for us on the cross, his death and resurrection. We live our lives here on earth victorious. A lot of songs are written from that perspective and I hope as people listen to them they are filled with courage and filled with hope.

Tony: It's been three years since your last recording.

Bryan: There was a bunch of things that happened in everyone's schedules and so our album got pushed back longer than we thought it was going to be. But it ended up feeling like [the delay] was the Lord. We were writing some more songs in the last six months, when we initially had thought we'd have already recorded the album, that felt really special; they felt like they were meant to be on this record. With all the stuff that's been happening in the world, it feels like it's the right timing for this album to come out, for songs like "Champion" and "Let There Be Light" to be declared in the world.

Tony: Have all the songs on 'Champion' been road tested now? Have you ministered with them in many live settings?

Katie: Yes, most of the songs. Actually, it's been so cool because in the last three years since we moved to Sacramento, California and been part of the Jesus Culture church plant it's been on our hearts to lead most of the songs in our local church and see how our congregation connect with them. Even a song like "Champion" started more at a personal level for me. Those words came during a time that I needed to declare them for myself. So sometimes songs will start like that, for ourselves, and we're not sure if they are congregational, if they are corporate worship songs. So getting to test them at our church and see other people connect with them has been really valuable. Now, since the record's been released, we've started to sing these songs on the road and it's been so cool.

Tony: Are there any songs which you feel are particularly impacting people at the moment?

Bryan: I think "Champion" and "Let There Be Light" - they were released early so they've definitely spread around quicker. There's a song called "You Never Let Go" which people have given really great feedback on. Another one that people have been commenting on, which was totally unexpected, is a little track called "Flame Of Fire, Rushing Wind". We had started writing a song and that was kind of the bridge. We didn't love the whole song, it just didn't feel like us; so we kept trying to write around it and we just never were fully able to get a song. But we loved that section so much that we decided hey, what if we made it a spontaneous worship section even though this is a studio album and we'll add it on to the back of another song and let it flow in as if it was a spontaneous moment.

Tony: For me, one of the unexpected things on the album is you've ventured into co-writes with people like Mia Fields and Hank Bentley. Why did you decide to start writing songs with other folk?

Katie: Well, there are so many amazing songwriters out there that have impacted us so greatly and in the past most of the previous albums were written just between the two of us so we were encouraged by some of our friends and our record label here to try and see what we could get with. We got connected to some different worship writers in Nashville, different people that have become friends in the last two years. We have really learned so much from these other writers, not only just technique-wise but just to hear once again what God's saying to other people. It encouraged us even coming in with themes or ideas that maybe we would have written off, hearing somebody else say yeah, I've been wanting to write a song about those words in the Bible "let there be light." I wanted to write a story around that and paint a picture too and that encouraged us to push for that song in the first place where we would have maybe been like no, it's too simple, let's move on from that really quickly. So, it's been a great experience. I would say at least half of these songs were co-writes with other people and we're really proud of them. I think we'll continue to do that now. We love it.

Bryan: The thing that I love about our record label and our community here is Jesus Culture is really relationship based. It's very much family, there is very little pressure at all. They just encourage us to chase after our dreams and to keep writing and leading worship and be ourselves. We have so much creative freedom which is incredible. It's not a huge record label, we just have a handful of artists. And most of those people, not all of us, but we mostly live in the same city and have close relationships. Jesus Culture Music has recently merged with Capitol CMG which has been amazing for us because it's brought some of that structure but we still have the family aspect of Jesus Culture and we love it.

Tony: Cross Rhythms feels that we are part of what you're doing. So let me wish you every blessing.

Katie: Thank you so much. We appreciate it. We really feel so loved and supported by you guys at Cross Rhythms and everything you're doing over there and your influence there.