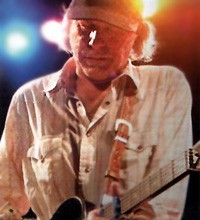 Buddy Miller's rare tour of the UK has given long time Emmylou Harris fans the chance to glimpse her guitarist as a solo performer. Judging from the audience, it seems to be mainly an older audience who have braced a wet, windy Monday evening in Wolverhampton. I only counted one dodgy Stetson and set of cowboy boots in the place which was a blessing and Buddy himself was dressed in statutory old jeans and baseball cap as he shuffled around the back of the venue in characteristic low key style. He looks faintly embarrassed as a fan stops him, thanks him for coming over to the UK and gets him to sign a CD.

On stage it is similarly low key. The Little Civic is a rock club with the audience standing close to the stage and less than 100 people crammed into what is effectively little larger than a lounge! Buddy confesses later in the gig that he loves the venue because it makes everything seem less formal and the chandeliers remind him of the legendary Filmore venue.

Backed by the Wilkinson Brothers from the Irish band The Amazing Pilots, it's an evening of blues, country, folk and gospel that awaits us in what can be loosely called Americana. The set comprises of some of his own songs, a couple of obscure country numbers and plenty of standards. "Price Of Love" which at second song in is the first moment that the set ignites with Miller's guitar driving everything.

He opens a can of beer and it spurts out splashing him. "I should have seen that coming after the first six," he jokes. "Thanks for coming out on a Monday evening," he says. "It's Wednesday," shouts some wag. For a moment Buddy looks confused and then realises he's been had. "Keep that up and I could easily have believed you," he admits.

Buddy sings the country "Wide River To Cross" which featured Emmylou Harris on his album and afterwards someone shouts, "How's Emmylou?" and someone else shouts, "How's Julie?" They're both fine he confirms. The first time I ever saw Buddy perform was when he played guitar for his wife Julie Miller who, as we all know, in the '90s worked in CCM.

It turns out that the decision to call Miller's last album 'Universal United House Of Prayer' was at the assistance of Emmylou since she petitioned the label after Buddy's photographer shot the cover photos at a church of the same name in downtown Nashville. The band kick into "There's A Higher Power", one of the best songs from the album, which gallops along nicely.

Miller is already demonstrating that he is an extremely versatile guitarist with a style that easily switches from country to blues and his own signature style which is a blend of the two with a little rocky edge thrown in. Throughout the evening he is brilliant whether he is playing electric or acoustic.

He sings the achingly poignant "All My Tears" which Julie Miller has also recorded in the past and it's at this point that it dawns on me how much Buddy reminds me spiritually of Johnny Cash. Like Cash, his sheer musical ability is what people are drawn by and Miller has respect because of his reputation. Consequently he can dip into his bag of gospel influenced country and blues and sing songs that speak of redemption and comfort and Jesus without alienating his audience who embrace the songs as part of an evening of Americana.

Solo now with an acoustic guitar, Miller describes Tom T Hall's "That's How I Got To Memphis" as a song he always plays every night he performs. He confesses that he played it as an audition piece when he wanted to join the band that was fronted by a teenage Julie Miller. Apparently Julie told the rest of the band afterwards that she didn't want them to hire him but he still got the gig and I guess the rest is history. The song rings out to a spellbound audience and it's not easy to understand why Buddy likes it so much.

He asks whether people have any requests but then hints that he either doesn't know or like the songs we're requesting! Evidently we're not picking the right ones! Miller spends a few moments paying tribute to the late great Mark Heard suggesting that the audience should search out his music. 'Universal United House Of Prayer' actualy opens with a Heard song, "Worry Too Much" and Miller confesses that he's loved the song since he engineered Heard's original studio recording of it. Tonight the words seem strangely prophetic and moving and very much of our time despite the fact that the song is more than a decade old. Tonight the version rocks and Miller's playing is extraordinary.

"Don't Wait", another track from 'Universal United House Of Prayer', follows and really swings and like most of the music tonight only serves to highlight Miller's fine playing. Finally he plays a song which was requested earlier "A Showman's Life" which maps out the lonely path of life on the road. It's a beautiful, sad country song and well requested!

Paul and Phil Wilkinson step into the spotlight at this point moving from their roles as bass and drummer sidesmen to performing one of their own Amazing Pilots songs with Buddy playing guitar for them. Hopefully a few people will have gone to the back of the hall and bought their CD. Having reviewed one of their earlier recordings, I know I did!

So the show with no set list starts drawing towards its close and the 10.30 curfew of the venue. Miller introduces the Jim Lauderdale song "Hole In My Head" and then sings the classic "That's How Strong My Love Is" which is a blissed out ballad featuring some huge vibey guitar. There haven't been many of Buddy's self-penned songs in the set. Earlier on he played "Does My Ring Burn Your Finger" and at this point he adds "Somewhere Trouble Don't Go" with some extended blues soloing to finish the set.

It's been a magnificent evening and Buddy steps back onto the stage to encore. "Would you like country or non-country?" he asks. The response is mixed but probably tipped over the edge by the Emmylou Harris fans. As a result he announces that he's going to sing a Hank Williams song and delights the audience with the mournful romance of "You Win Again".

As a journeyman musician, Buddy Miller has played with a lot of people and strummed guitar in a lot of bands over the years and still wins plaudits for his work with Harris. Whether recording solo or with his wife Julie, he is consistently releasing top quality records. As a live performer, on the strength of this, he can hold his own against the best in this genre. Like all truly great musicians he seems relaxed on stage and throws himself into performance with effortless ease. There's a girl in her early 20s next to me who has been watching me scribbling notes for this review and she asks me what I'm doing. I explain and ask whether she's a fan. "Nope," she replies. "Somebody told me I should come and check him out and I'm glad I did." I think we all are!