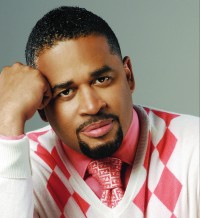 On 13th March in Detroit's Second Ebenezer Baptist Church a major gospel event is occurring. Top selling gospel worship man Byron Cage will be recording a new live album. The award-winning veteran was asked recently what fans could expect from the project. He responded, "[It will be] a hard-hitting praise and worship, Sunday morning, Wednesday night Bible Study, revival, on the treadmill, in your car. . . it's all of that. I'm using three of my background singers and I'm pulling nine singers from Detroit. You know, they say 'it's in the water in Detroit,' so if I'm going home, there's no sense in me bringing a whole aggregation of singers with me, 'cause there are so many great singers there in Detroit."

The album will feature some special guests. Explained Byron, "We were trying to work out Pastor Marvin Sapp, but it didn't work out for this one. But, thank God, Pastor Marvin Winans is doing a song with me, my boy Tye Tribbett is coming to do a song I wrote called 'In The Midst' with me. . . it's gonna be a great time."

A lot has happened to Byron since Cross Rhythms last reported on him in 2007. His 2009 album 'Faithful To Believe', also recorded at the Second Ebenezer Church, was a major hit with the Black Gospel Blog enthusing, "'Faithful To Believe' is the whole package: great production, lovely songs, fantastic background vocalists, and the Cage-Sheard-Winans trio is a special treat."

In 2012 Byron's 'Memoirs Of A Worshipper', this time recorded at Christ Universal Temple in Chicago, was released. Byron spoke to gospelflave.com, "Faithful To Believe' was speaking to the times that we were living in. Many were struggling and in need of encouragement. I believe that I am in a different place personally and professionally and this project reflects that. We are all human at the end of the day, and I wanted to present songs that reflect my life. Songs like 'You' and 'Gratitude' are heart songs on this project."

Byron spoke about his favourite song on 'Memoirs Of A Worshipper', "You". He said at the time, "If anybody ever wants to know me, listen to my words because that's who I am. I'm just at another place now. And the place that I am, it's a place where I want all of the glory, all the honour, all the praise to go back to him. He's the one that has me in this public place."

Byron has recently taken over a new role as Minister of Music at St Paul's Baptist Church in Richmond, Virginia. He commented to journalist Sarah Hearn, "It was something that the Lord allowed me to do and I'm so very, very thankful, very grateful that God would allow me launch out to this. You know, I hired Tye Tribbett and I hired Rickey Dillard and I hired Clifton Ross and Minister Lee Adams. I hired the staff that is capable to operate whether I'm there or not. I'm still there on Sundays, but because the staff is so heavy, the pastors said 'if you'd like to you really can give us a couple of Sundays. If you really wanted to do some other things, you can do that as well.' So maybe about two months ago the opportunity came up at St. Paul's. I was just grateful and thankful for the opportunity. Pastor Lance Watson was asking my old manager did he know of anybody that they could have come to their music ministry. He said that they wanted somebody like Byron Cage. So he said 'what if I can get you Byron Cage?' He said 'we don't want anybody else if we can have Byron.' So after we talked about it to see if the Lord would open up the door then I was able to walk through. I'm very, very thankful for the opportunity and of course, Lance Watson is an incredible speaker, incredible teacher."

Byron was asked about the changing styles and sounds of gospel music. He said, "I think the methods are changing, but the message is staying the same, which is important. I know that in the African American church we, for the most part, yielded ourselves to a more traditional style of church with the organ and the piano and the drums and the bass. But lately we have gotten off into the acoustic guitar with more of the CCM, Christian music sounds. We have kind of been crossing that line with songs like 'How Great Is Our God' which became a hit in African American churches, which of course was in the multicultural church, the white churches - it was made popular there. We're literally crossing everything over now, so it's been a blessing and I think that the direction of the music as long as the message stays the same, I think that God will allow us to cross our cultures' musical style and we'll be blessed."