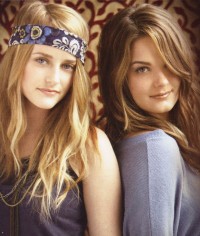 The release of the infectious self-titled album by Nashville-based Cadia with its guitar laden hooks and melodic pop piano sound clearly put the new duo in the same ball park as BarlowGirl and Krystal Meyers. But as "I'll Stay", their latest turntable hit on Cross Rhythms, shows, 20 year olds Tori Smith and Courtney Myers aren't two stereotypical airheads fantasizing about the perfect boyfriend but two young disciples offering songs of hope to their young audience. Even their name is derived from the ancient Greek word arcadia meaning "a place of peace". It's the desire to convey that healing message that led the duo to enter the Christian music world. Said Courtney, "When I sing, I think about girls I know. Life changes so drastically when you begin middle school. Suddenly, there are hormones, zits, boys and all kinds of pressure. High school brings a whole new set of responsibilities. In college you are faced with even bigger issues like sex, drugs and alcohol. This is the age when you are making such important decisions that can affect the rest of your life."

Tori and Courtney grew up together through kindergarten and school in Nashville and got their first break when they started singing lessons and landed a part in their school's performance of Annie Lee the musical. Neither of them made the lead role but that's definitely no reflection on their singing ability.

Unlike the thousands of music wannabes that descend on the city trying to get noticed by big record companies, the duo were actually born in Nashville. But they've never been interested in country music. Said Tori, "There's a lot of country music here of course. It's funny, you go somewhere, everybody's trying to be in the business, no matter where you go, the mall, the restaurant, you can just see they're trying to act like they're somebody." The duo confess to knowing who Garth Brooks is, but having been brought up on Christian music have never had any desire to do anything else.

Although both brought up in Christian homes, it's in the last couple of years that they've really started to grow. Tori commented, "I've always been a Christian but I think as you get older you mature and start to understand things more and as Courtney says, it's a journey and your always growing as you learn new things."

Courtney, the more confident and dominant member of the group, told broadcaster Mike Rimmer how she went to church to respect her parents but at the same time she would question, "Who is God?" After leaving her Christian school it took her a year to discover God and have her own spiritual journey by asking, "Who is God to me? Where do I play a role in all this? Where does he play a role in all this?" "I think it just takes time for some people and it definitely did for me" she said.

The 'Cadia' album was released in the US in February 2008 by Fervent Records (a part of the Word label group). It was produced by Otto Price (BarlowGirl, Out Of Eden) and Rob Hawkins (Big Daddy Weave, Jump5), helping shape the girls' teenage pop rock image and gathering an array of well known songwriters like Nichole Nordeman, Brooke Fraser, Cindy Morgan and others. Tori said the song "I'll Stay" most relates to her, telling the story of having years of worry and not facing up to anything she was angry about. Penned by Nichole Nordeman, the first line of the song says "You're moving faster than an outbound train/Trying to find a way to outrun the pain." "That was the story of my life, it's a constant work in progress," commented Tori. "It talks about there's definitely going to be pain but God is always with you and sometimes it's so simple but it's really hard to grasp."

For Courtney, her teenage struggles were with depression. She suffered a lot through junior and senior school explaining how she would just sit and cry and never know what she was crying about. She recalled those times and described how she really relates to the song "Trust In Me Now", in particular the line "Even though you feel alone and even though your faith is gone/There's a love that will let the rain fall down." Other themes that come out in Cadia's album are self acceptance in the song "Safe Place To Fall", something the girls and their writers realise is a big issue among the young generation and even in the music business.

As two girls who have been through the struggles of teenage life, sometimes not knowing exactly who God is and what to do with their faith but persuing it regardless, Cadia can offer some advice. "We all mess up. Christianity isn't an event. It's not like you become a Christian and you are on fire for God for the rest of your life. We're humans; just because we're on the stage doesn't mean that we've got it all together and we're in our Bibles for two hours every day and we can quote every Scripture. But I think that's the beauty of it, people can see that we're real and we don't get it all right but that we can be an encouragement at the same time."

The opinions expressed in this article are not necessarily those held by Cross Rhythms. Any expressed views were accurate at the time of publishing but may or may not reflect the views of the individuals concerned at a later date.
About Gareth Duffield
Gareth Duffield is a journalist and assistant to Mike Rimmer and lives in Birmingham.

For more on Cadia visit the Cadia artist profile