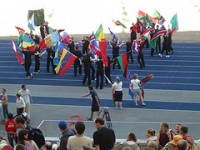 In one 11-hour period, the Charite hospital treated 275 people who had been attending an all day event in Berlin. 600 first aiders had struggled to make their way through the crowds to assist those whose drug and/or alcohol consumption had taken its toll. Afterwards 60 tons of rubbish marked where the gay pride Love Parade event had passed by.

Over on the other side of town, however, tens of thousands of Christians were celebrating a different kind of love. The call to all nations was answered by 800 singers, musicians, worship leaders and dancers and a crowd of over 22,000 from 30 nations. The Olympic Stadium was by no means full (which at first was a disappointment) but as the event kicked off with a display of flag waving, the Psalm Drummers and the band Yfriday, suddenly the crowd seemed bigger and within minutes the place was buzzing. Albert Frey, a respected German songwriter, led us in a couple of his worship songs which were also translated into very good English - this is not something to be taken for granted. He asked us all to invite the Holy Spirit to come and the atmosphere in the stadium left no doubt that the Holy Spirit had heard and responded.

Next up was Britain's Chris Bowater who had brought along a choir from France and Quebec and groups positioned around the arena who used sign language for "Faithful God". After we had sung it through a couple of times it was a truly inspired idea to have us all sign this classic worship song: no voices, no music but a huge crowd worshipping the true and living God.

Audience participation of a different kind was required next when children's praise leader Daniel Kallauch appeared. It was great doing the actions to some of his classic kids praise songs - which don't appear to have been translated and so have not travelled outside the German speaking countries. He had even organised air guitars for us all (which we had to remember to put back under our seats so they could be collected later). 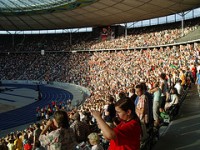 Then came Noel Richards, Wayne Drain and Sue Rinaldi. There was no break, no big build up, they were just there - each one taking up the baton as it were from the person before. They were followed by Hungarian, Dutch and German artists. It was an absolutely stunning range of voices and styles. Everyone brought God the talents, gifts and uniqueness that he had given them and offered it back to him - blessing God's people in the process.

According to Gerald Coates who spoke next, the problem we Christians are faced with in Germany, Europe, the world is not "too much darkness," it's "not enough light." He encouraged us to be light and let our light shine - wherever we are and people will be attracted to the light. Florence Joy and Brian Doerksen were up before the break. "Purify My Heart" and "Don't Let My Love Grow Cold" - again in both English and German - were really powerful and there was an anointing on this time that was awesome.

In order to save time and make the work of the sound teams as efficient as possible both ends of the arena were being used. As one artist finished at one end, the next person was ready to start at the other end. If this had not been the case it would never have been possible for so many artists to appear in the time available - and bless so many people. However, it was not always easy to stay focussed and worshipping as the changeovers were so rapid at times.

During the break there was food on sale - not much variety and huge queues but hey, that's stadiums for you. And anyway, God's people had come prepared and were happily enjoying their picnics on the grass in the glorious sunshine. There were stalls to browse round - the major Christian organisations in Germany but also world wide were represented. Every conceivable Christian book, music, T shirt seller was there and networking was the order of the day. 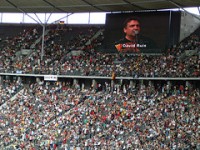 After the break Wolfhard Margies, founder and senior pastor of the Church On The Way (Gemeinde auf dem Weg), Berlin's largest church, spoke. He said that the gifting in the area of church music which had been buried in Germany for so long was being rediscovered. Lilo Keller, Swiss praise and worship leader, drew a parallel between the work of the women who contributed to the rebuilding of Germany's cities after 1945 and the women God is raising up to rebuild Germany's worship. There was a moving interlude when those people from Germany's neighbouring countries were asked to stand and all the Germans in the stadium asked for their forgiveness and prayed blessings on them.

After so much serious talk and prayer the crowd decided it was time for a Mexican wave or two which was great fun. More lessons in church history next and a challenge to live for Christ from Roland Werner, initiator of the Christival Fest and leader of the Christus Treff - an interdenominational church in Marburg. While the offering was being taken (this was to help offset the costs of staging the event) Arne Kopfermann led us in a couple of German worship songs and then Judy Bailey, the black singer now based in Germany, brought a reggae feeling which got us to our feet. To close this session Canada's David Ruis sang some very prayerful songs and people worshipped in a variety of ways - on their knees, with hands outstretched, rocking sleeping children in their arms or standing very quietly. Then there were others who were absorbed in eating their pizzas.

Britain's Tim Hughes was on first after the break ("Passion For Your Name" and "Here I Am To Worship") followed by one of the pioneers of contemporary worship Graham Kendrick. Unfortunately, Graham was difficult to hear initially. But then it verges on a miracle that there were hardly any technical hitches the whole day. Some effective prayer was involved there. We were then treated to a very personal testimony and some songs from Brazil's Assiria - a famous Christian singer in her homeland but known to many as Mrs Pele (yes, she's the spouse of the football legend). During the World Cup Assiria had spent many hours in the VIP area of the Olympic Stadium and told God how privileged she felt to be mingling with heads of government, heads of state, princes and the like. God reminded her that the greatest privilege is to be his child destined to sit in realms far higher than any leader on earth.

The second offering was to be a sign of love to the world and an encouragement to people in need. More Mexican waves hit us - got to be good for the circulation - then it was full steam ahead to the commissioning. There were songs from Reuben Morgan (Hillsong, Australia) and Tengerin Doo (Germany). Walter Heidenreich, evangelist and author, believed Germany needed to be evangelised all over again. Roland Werner had come prepared with tracts (five for one euro). If we all took a pack we could reach 100,00 people between us. There were video messages from Malcolm Duncan and Steve Chalke both making the point that worship in and of itself is not going to reach the lost and that Jesus calls us to follow him, not (just) worship him. Delirious? and then Matt Redman led us in four of their best praise and worship songs ever and Matt put it succinctly when he said, "We have filled a stadium with his song, now let us go and fill the nation with his song." To finish Noel Richards, the renowned worship songsmith and the creative driving force behind this whole extraordinary event, sang a song he had written especially for the event which was then sung in a number of different languages.

The whole day had been well planned and superbly managed. The atmosphere in the stadium and round about was that of a gigantic church day out (I'm loathe to say fete). I doubt whether there were any incidents to further tax the resources of the Charite. At times it felt like for some people the day was more about having fun than getting serious about God and mission with the Mexican waves seemingly inappropriate at times. But I'm sure another step in taking the nations for God was made this memorable day in Berlin.

The opinions expressed in this article are not necessarily those held by Cross Rhythms. Any expressed views were accurate at the time of publishing but may or may not reflect the views of the individuals concerned at a later date.
About Jeannette Clarke
Jeannette Clarke was born in England and now lives in Germany, attends the International Baptist Church and from August will be teaching at the Free Christian School.

Thank you for this very well detailed reportages on Calling All Nations day. I was there as one of the very few italian and I was very glad to be part of this great event. It was really amazing to stand and worship together with 30 different nations. Everything went very well, only thing is that at time the transition between one atmosphere and another was a bit too quick... but I felt privileged to be part of these worshippers and I'm grateful for the way Noel and the team have organized the event. Hope this will be the first one of many other events all around Europe

I was in Berlin last weekend; I attended both Calling All Nations and the Love Parade, and I have to correct something Jeannette said about the latter. The Love Parade is not a Gay Pride event, or a celebration of any other kind of "alternate sexual lifestyles" - it's a dance music festival, plain and simple. It started in 1989 as a rave to celebrate the fall of the Berlin Wall. Yes, it does get quite decadent and attract a lot of weirdoes - which carnival doesn't? As Christians, we don't have to like everything the world does, but we shouldn't misrepresent them either.