Carl Tuttle: The US songwriter on worship

Many articles, indeed many whole books, have been written about worship music. In this testimony American songwriter CARL TUTTLE gets to worship's heart. 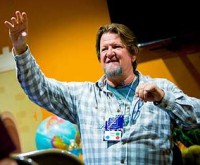 In 1976 a small group of people gathered in my sister's home in Yorba Linda, California. The common bond of this group was "thirst"! Thirst for a reality of relationship with Christ that was reflected in the promise of Jesus, "Drink from these waters and you will never thirst again." We had tasted of religion and were empty. We had tasted of Bible study and were still thirsting. We had tasted service and again found ourselves thirsting and longing for something more "Bible like" in our experience with God.

By "Bible like" I mean just that, something powerful, dynamic and lasting. Something that had some joy, yes and even "joy unspeakable and peace that passed our understanding." We had read about it, we had heard about it when people, mostly preachers, told stories about it, but if we had to be honest with ourselves and with others and more importantly with God, we had to admit that something was really wrong. For a group of zealous, faithful church folks, we sure weren't very happy, didn't have much peace and were really, really thirsty.

Because we were people who felt like we had all the answers, we were really uncomfortable with anyone else who thought they might have an answer. Two kinds of people stood out who we didn't care to hear from. Group one were the "tongues speakers". Although we could accept that some people may need that kind of emotional experience, you know, people who are emotionally unstable, drug users, alcoholics and such. We weren't very interested in their advice, "you need to be filled with the Spirit evidenced by speaking in tongues." Implied in the message was that if we had that experience it would be a cure all. No thanks.

The second group of people we didn't want to hear from was anyone within our group! We were so sick and tired of each other's opinions that when we started meeting at my sister's home one of the first rules we had was that "we didn't want anyone to teach." That is and was a statement much more about our feelings for each other, than about our feelings regarding teaching.

So when we gathered, we decided that we could only do two things, yea and verily maybe three, if we were careful. One is we would sing. Yes sing, that's what we called it back then, I'm not sure if the term "worship leading" or "worship leader" even existed at that time. It's hard to imagine that now, but even if the term existed, it did so outside of our understanding and we wouldn't have had any idea regarding its meaning. So we sang songs and I was the song leader - more about that in a moment.

Secondly, we would end our time in prayer for one another. Not intercessory prayer or warfare or any strange and unusual kind of prayer, just prayer for individuals. Oh yes, not laying-hands-on type of prayer either, that might "stumble someone"! We could pray for individual needs upon a person's request. The request had to come from the person and be for the person making the request for him or herself. No praying for the Church, lest we communicate something negative. No praying for revival, because we hadn't a clue as to what that was or meant other than we knew it happened in a tent most of the time and definitely had something to do with "tongue speakers".

At this point it probably will help those of you who don't know; the group that started in my sister's home I am referring to is what would eventually become the Anaheim Vineyard, pastored by John Wimber. You know, that "tongue speaking, hands laying on, healing the sick, casting out demons, prophesying, revival spouting, worship till you drop" Vineyard! We were one of the most uptight groups of people you could ever have met. At this point in our existence if someone may have been as indiscrete as to have prayed in tongues under their breath, they would have gotten a good "talking to", we didn't want anyone to be stumbled. Yikes!

Now that we have set the context a bit, I will continue. We began to have our little meetings. We sang and sang and sang some more, which was hard in those days, because there weren't many "contemporary" choruses and I wasn't able to lead any hymns on my guitar, not that I would have wanted to - oops, did I write that?

After a few weeks I recall very distinctly that during one particular song something strange happened. I wish I could relate it more clearly, but I can't so I will steal from John Wesley, as we sang this little chorus, "Praise you Father, bless you Jesus, Holy Spirit thank you, for being here." It was apparent he was! And everyone knew it. It was at this time that we noticed something very different about our "singing"; it had been transformed into "worship". We weren't just singing songs about God, nor do I think, like many others have stated, that it had as much to do with the fact that we were singing to God. Jesus said, "Those who worship God must worship in Spirit and truth." I believe that is what happened; we transcended the point of making our own efforts and were worshipping as a result of the empowerment of the Spirit. That is as a result of coming to God in humility, honesty and submission; God filled our praises with his Spirit. He was "enthroned upon the praises of his people."

Something else happened. The thirst that we had for God, his presence, his power, his person, was being quenched. In retrospect it is obvious to me that it was God who created the thirst. I think that is one of the most wonderful things, which is that God creates a circumstance in our hearts, our lives that only he can satisfy!

Today, as at that time, we see people thirsting for something outside of their present situation. At times I think we despair over this, feeling that the Church is ineffectual, preaching has no affect beyond the moment, programmes and great plans seem to come to nothing. Perfect conditions for God to work. In the end I think that most of us are hoping to see something happen that only God can do.

Along these lines I believe worship that is expressive, passionate and authentic is needed to facilitate the connection young people are seeking to have with God. At the very core of worship is "meeting with God." This only happens when we come before him, desperate, humbly and thirsting. When we come from that place, God takes us to a different place! One that transcends our place of dryness, he brings us to an "oasis" of his presence and quenches the thirst that he created and only he can meet.