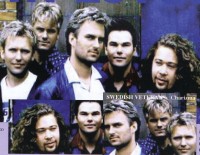 Sweden has a history of producing bands that pump out thunderous rock music with a message to match. Jerusalem and Leviticus are two that spring immediately to mind. Charizma is a band that has been around as long as the others, but instead of becoming heavy rock dinosaurs, they have shifted styles to embrace Europop with some roots and gospel influences.

Charizma's fascinatingly eclectic history began in the early '80s when brothers Bo, Jan and Goran Nikolausson formed a punk band. All three brothers were in their early to mid teens, and used to practise at home, to the obvious detriment of good relations with the neighbours! They had, however, wanted to play rock music all along. "We were just kids when we Started to play", Bo told me, "but we only did secular music at first. Then, when we heard bands like Jerusalem and Leviticus, we realised that we could play hard rock music and sing about God at the same time."

In 1985, their popularity in Sweden was assured when their debut album 'Rock The World', and the single from it "Turn Me On", received a lot of airtime on Swedish radio. The band spread their wings in the late 80s when they toured Poland, went to the USA to play some gigs in Hollywood (at the same time signing a US distribution deal with Stryper's label DHM), and were invited to Greenbelt in 1988. The following year saw them take up residence in Los Angeles for six months, appearing at many clubs in Hollywood. "Hollywood and LA were THE places for Christian glam rock in the late '80s, and we had a great time and made a lot of friends, including Oz Fox of Stryper, who would work with us in the rehearsal studio which we shared with Holy Soldier. But although we loved it in America, and people really took care of us, for some reason we found it very difficult to write music while we were there. The main thing that being in America taught us was how to feel comfortable on stage, and to look right, which at that time in the USA was sometimes more important than the music!"

On their return to Europe Charizma toured Estonia, which at that time was still part of the Soviet Union. Their new single "Join Hands" was an immediate hit, making No 1 in the Estonian radio chart, and this led to a nine-gig tour, which drew over 30,000 fans. The album 'Rock The World' was reworked as 'Rockin' The World Together' and released in 1990 on the Estonian Communist State record label, Melodiya, who distributed it throughout the Soviet Union - some achievement for a rock band with an up-front Christian profile and song lyrics to match! "A very close friend of ours, a journalist who was on the Estonia ferry when it sank a couple of years later, he took our first album with him to Estonia, and suddenly everything just opened up. It was like they didn't realise we were a Christian band until it was too late, and we had become too popular! Being on the music charts as a Christian band together with Bon Jovi and Madonna, having your songs as Number 1, was really cool. Another thing that gave us a really great feeling was that, through doing God's work, we were making a difference."

Autumn 1990 saw Charizma touring Germany, which has since become one of their regular haunts, and in the spring of 1991 they set out to tour Australia. Their next tour of Estonia in August drew 46,000 to the concerts, and as a result of their popularity, the band helped the Estonians celebrate their independence from the Soviet Union in August 1992 by performing for a crowd of over 30,000 (they were the only foreign musicians invited). "One of our songs was the first song they played on the radio after their declaration of independence. That was a really important time in our lives; God taught us a lot, and sometimes we learned it the hard way, but more than a thousand people got saved at our concerts. We haven't played in Estonia since 1992, but we still get a lot of mail from there!"

Other tours to Finland and in Sweden with The Imperials took up the rest of 1992, and in 1993 their new album "The Ultimate Call' hit the streets. More tours to Germany in 1993 and 1994 followed, and after the second of these, in August of that year, the band decided to take a year off to rethink their direction and find new goals. "The ministry became more important, and even more of a priority because we had a feeling in 1994 that we would never play together again. However, we felt God's leading to continue, so we started up again in '95. The change in music style was a result of wanting to try something different; we'd played hard rock for so long, we needed a fresh sack playing more gigs the following Spring. A new deal with German publishing and record company Asaph Muzik was signed in May 1996, leading to a new album 'To Be Continued...', recorded in Hanover during the autumn, and released to Western Europe in December. The single from the album, "Higher Than The Heavens", received airplay on the national radio stations of Sweden, Denmark and Norway. "It was taking a chance changing our style, but we felt we had to change our way of thinking when writing music. We do have new listeners but we also seem to have kept a lot of our old fans."

More concerts in Sweden, | including a national TV show, and a promotional tour of Germany for 'To Be Continued...' took up most of 1997, and somehow the band found time to take in the Flevo Festival in Holland in August. Probably they wished they hadn't, as they found themselves playing five sets within 24 hours!

Charizma played a few gigs in the Spring of 1998 prior to spending most of the rest of the year writing, rehearsing and recording material for their new album, due out in the Spring of 1999, and provisionally titled 'Loose Yourself "I think our new album will appeal to our new fans, but they'll find that it's heavier than 'To Be Continued...'. There are some tracks with some really loud guitars that our old fans will like, but there's still lots of pop influences. I think the new material is more personal, we've grown closer together as a band, and the songs have more of an edge; it's definitely our best album yet. We believe that it has the potential to take us further in reaching people both musically and lyrically, and that fits our main goal. It's our mission as Christians to reach people, to give them the chance to get to know Jesus; I do believe that's what we're here for, that's our purpose in life. To use a line from The Blues Brothers - 'we're on a mission from God' -but then we add '..to spread the gospel of Jesus Christ.1

For more on Charizma visit the Charizma artist profile