Charlie Daniels: A chat with the country and Southern rock legend

81 year old Charles Edward Daniels is unquestionably a near legend in music. The singer, fiddle player, guitarist and producer was inducted into the Grand Ole Opry in 2008, the Musicians Hall Of Fame & Museum in 2009 and the Country Music Hall Of Fame in 2016. His 80 plus albums include many hits and his classic 1979 Southern rock opus "The Devil Went Down To Georgia" with its imagined battle of the fiddles is considered by many to be one of pop's greatest ever recordings. Las year he published an autobiographical memoir Never Look At The Empty Seats and still, astonishingly considering his 81 years, plays concerts with his much admired band. I spoke to the Southern rock and country veteran and threw him a few scattershot questions.

Charlie: Well, I'll answer you like this - I did the Thursday night Opry last night, I am currently in Ohio playing a concert here tonight and when I finish I'm heading for Iowa to do the same thing. I've got close to 110 dates on the books so I'm not thinking of ever retiring.

Tony: You must be getting used to people saying how amazing that is. Would you say that your faith is giving you the strength to continue?

Charlie: Definitely. I just love what I do. Fortunately the business I'm in is not so physically demanding. If I was doing heavy lifting I certainly would not be able to continue though it is very much work and it will tire you out. I am not required to do heavy manual labour or something and I just love it so much that I just keep on doing it. I can't imagine my life without it.

Tony: What's been the response to Never Look At The Empty Seats?

Charlie: It's been pretty good, people seem to like it. I wrote on the thing for 20 years and I could never find a place to stop it, things just kept happening. I never got inducted into the Grand Ole Opry until I was 71 years old and interesting things kept happening. When I found out I was going to be inducted into the Country Music Hall Of Fame I thought this is a great place to pause this story right here. So I did. I went and wrote the ending, and I had a book. It was a long time in the making, one of the main reasons was I couldn't find a place to end it, so it worked out really well.

Tony: Tell me something about your faith. 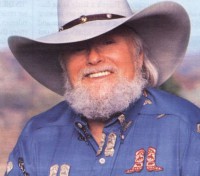 Charlie: I have been a believer all my life. I came from a Christian family but if you have read the book then you have followed my yearning phase and that was the hardest chapter for me to write. I knew what I wanted to say but I wanted everybody else to understand it too. I was always a believer but to my understanding of what the Gospel message was, why Jesus had to die for me and all the attendant things to that. It was not a Damascus road experience, it was a bit by bit, little by little, understand a little more type thing. There was no real time line, it was and still is ongoing.

Tony: At the time you recorded "The Devil Went Down To Georgia" did you have a full understanding of your faith?

Charlie: I had the faith, I just did not understand it. If you read the book you'll know that a lot of churches that I went to when I was a kid preached either condemnation or was very lackadaisical - that's the wrong word - and it was finding what it was all about, why. I always believed Jesus died for my sins but I didn't know why, why did he, how did that make the difference? Nobody would explain that to me and I finally decided some years later that I'm going to read the Bible for myself, I'm going to make my own decisions about this and I'm going to decide for myself what this is all about. And that's what I did. It was an awakening, it didn't all just happen at one time, it was a gradual kind of thing.

Tony: The song "Praying To The Wrong God" on your gospel album of 1994, 'The Door', has always struck me as being very daring in these politically correct times. I don't suppose you got much radio play on that song?

Charlie: Probably not, I don't really know for sure. There were other songs on the album that actually took most of the broadcasting time but I didn't have any troubles writing that song because I'm pretty outspoken about things I feel.

Tony: I think it's a very important thing because in Europe we still get a lot of people saying, 'Well you all worship the same god don't you?' that kind of comment, or 'All religions basically are effectively the same' which is profoundly not what the Bible teaches. There is a liberal mind-set out there that seems to accommodate that idea quite happily. But you said it was an easy song for you to write?

Charlie: In so far as what it's about. I laboured over the lyrics but I had no problem in content at all. I knew what I wanted to say and I just went ahead and said it. I'm quite sure I'm going to make some people unhappy by saying this but I think the Church. . . So many times we think that everybody that walks through the front door of a church is already versed in the basic Christian things about Jesus died, his blood covered our sins and how it happened, but they don't understand, like I didn't understand, why. Why did this have to take place? You got to go all the way back to the Old Testament, the blood sacrifices, to really get an understanding of what this is all about and I think the Church so many times it's like they are preaching to the choir.

I know a lot of churches don't want to get involved in talking about that Allah is not the same god as Jehovah. I know they wouldn't want to stand up in the pulpit and say that for fear of making somebody mad. But the truth is the truth is the truth, and he's not. People need to know that. People like you were talking about in the UK and those places, they need to understand that Allah is not God, there is one God and he is the God of Abraham, Isaac and Jacob, he is Jehovah, he has always been and will always be and he is the only one. It's like I describe it, people say 'there are many ways to the mountain top' and there are but nobody is on the mountain top but God and he says the only way to get to him is through Jesus Christ.

People need to understand that and the Church needs to preach it, needs to be first and foremost. Preaching morality Sunday after Sunday is fine and dandy but if you want to reach down where people are you got to shock them a little bit sometimes. That's what I needed, I needed to be shocked, I needed somebody to tell me yeah, there's condemnation but the amazing thing was that there was such love that he was willing to send his spotless son who had never committed a sin and he died knowing what a cesspool this world would turn in to, that's how much he loves you. People need to understand that before they get to the condemnation because people sometimes look at God as if he's some patriarch or a god in a robe and a long white beard standing there with a fly swatter waiting to hit them upside the head with it.

And that's the thing, there's that side of God, the wrath of God and I know that, but the love should be taught first and this is the love, this is how much he loves you and if you're willing to accept that, here's what you need to have, here's how you need to live and here's what you can to do and here's how you can spend eternity. If you don't, God gave you the choice to do it, you either do it or you don't want to do it, but here's the truth, you can check it anyway you want to and if you do enough reading and stuff you'll find out this is the truth and I think that's missing in our present day ministry to some extent.