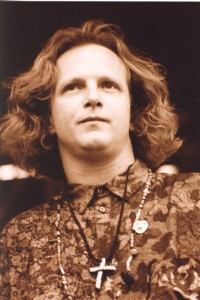 The apostle Paul argues that our faith is futile and useless without the resurrection of Jesus Christ. If we have only hope for this life, we are to be pitied more than all men. It is the resurrection of Jesus Christ that is the beginning of hope and change. That's a thing that becomes evident when talking to Charlie Peacock and listening to his latest album, 'Everything That's On My Mind', his first after a three-year hiatus.

The songs on 'Everything That's On My Mind' are probably the most personal he's written throughout his career. Recording an album himself wasn't an easy decision, decided light-heartedly, or due to contractual obligations. States Charlie: "It is important that every person, whether they happen to be a musician, a plumber, or a school teacher, should pause from time to time, to take stock of where they are and consider whether or not they've remained faithful to their calling. It was this sort of prayerful introspection that heavily preoccupied my heart during the months preceding my decision to record this album. I was simply asking, 'Do I, in this season of life, have anything of relevance to say to my culture?'"

When I remark that that question is a strange thing for such a competent and successful producer, Peacock responds, "I think that can be an assumption put on by image and an assumption put on by reputation that don't have anything to do with the issues of the mind and the heart. I wanted to give plenty of credence to what was going on in my mind and in my heart and in my skill and ability as an artist. I really needed to know that I could speak about something and write music about something that I believed passionately, I didn't want to be, well, 'Let's write 10 songs and put them out.' That's never been my way of doing business. Enough time had passed that I had to stop for a minute to say, 'Are we supposed to do this or not?'"

One of the main reasons for this time of introspection would be that Charlie Peacock's life has gotten a different shape in the past four to five years. These are days when there's a bigger chance of finding Charlie fishing with his son than on the road performing. Working during weekdays and performing during weekends left little time for family and friends and lots of other things that Charlie is involved in, such as serving in his church as an elder. Charlie and his wife Andi are heavily involved in 'The Arthouse', a non-profit organisation based in their hometown Nashville, for the purpose of serving artists and non-artists alike.

If that isn't enough, Charlie has recently set up a new multimedia company that plans to produce CD-roms. Comments Charlie, "One of the things that you may expect is that we take some popular and important books and videotape series and convert them to CD-rom. We would love to convert some Francis Schaeffer material."

But family is probably the most vital reason. "I don't perform often anymore," says Peacock. "My children have gotten older. There are some very important things that I need to be involved in in their lives. I have a daughter who will go to university next year and I want to get her prepared for that. I have a son who is quite a strong musician himself, who needs help and training. There are a lot of wonderful and beautiful people around me who I want to be able to spend time with and love and learn and grow from. You know, just a lot of things that add up to cause a person to assess whether how they should be spending their time."

For a lot of people the major aspect of Charlie's ministry has always been his performance. I remind him of some of his performances at the Dutch Flevo Festival and Cornerstone, that were some of those rare moments where people were moved to tears and joy. Charlie's concerts are cherished as some of the most special performances ever at both festivals. "I appreciate that," responds a humble Charlie. "I had wonderful times performing at Flevo and Cornerstone and I am grateful for those opportunities. But at that time, that was much more my orientation, as a performer, someone who toured more often. (Laughs) It seems that God has opened other doors for me, to use other forms of creativity. I can't say that I wouldn't go back to that, you can't know for sure, but right now I have so many things that I'm involved in, that take up more time than I have actually..."

According to Charlie, 'Everything That's On My Mind' is an album that reflects where he's at at this point. "It certainly describes the last year. Most of that music I wrote a year ago. And a lot of it is still very prevalent, issues of grace, issues of dealing with death and dying, things like that. But also, I really like the music too. The main thing I wanted to do was get away from the soul/R&B element. If I was going to do that, it would be cast into a rawer context, which I felt the guitars would provide rather than keyboards. I think 'Love Life' was really the culmination of several years of performing with a couple of different bands that had that kind of orientation. And after the 'Love Life Tour' and when Vinnie died, it seemed time to close that chapter.

"I think my music at this point will go the route of getting simpler and rawer and perhaps even more primitive," laughs Charlie. "I'm deconstructing right now." The man clearly has had lots of fun recording this album and is determined to do it again. Early on, Charlie decided to use the energy and enthusiasm of a group of young musicians, rehearse the song 12 or 13 times and then record the album basically live in the studio. "On one level (the collaboration) was a reaction against the self-reliance that is so easy to fall prey to when you live in our culture," Charlie says. "When you can do it all yourself, when you can play a sampled bass line on your keyboard rather than bringing in a bass player, there is a strong temptation to control the entire process. But what I've discovered over the years is what you gain in control, you tend to lose in chemistry. You can easily forfeit the organic and dynamic elements and wind up with something flat and processed. This time around, we held rehearsals and went into the studio and recorded exactly what we had rehearsed. It was a return to the way I used to record 18 years ago when my career began. The experience was one of coming full circle."

Dropping the R&B element, so prevalent in most of Charlie's recordings, wasn't that saying that has never really been his own style? "No, very much it was, because that's the music I grew up on and that's music I know how to do and I know how to do well. It would be difficult to describe me as having any other style, other than eclecticism. That's one of the reasons I'm a producer because I can do several kinds of music, on some level of expertise. I would say if I have a style, it's probably associated with my ability to experiment, rather than a fixed kind of thing where you would say that this person is folk, and this person is black gospel or this person is jazz, I don't think you can say that about me."

You can easily trace some of Charlie's roots on this recording. "Well, it was something that I was used to early on, before I started recording. Before I started putting out records, a little bit of what, at that time, I associated as being more primitive in terms of the sound and what not. But as I have gotten older, it has gotten to be one colour on the palette, and I have decided to go back and use that colour again. It isn't necessarily a new thing, but it is the fact that I haven't done any major recordings in that style before."

Moving on musically on 'Everything That's On My Mind', was essentially for Charlie. The death of Vince Ebo certainly was one element that stimulated that decision. Comments Charlie, "Not primary, but certainly it was an element of it, part of the grieving process to say, 'Vinnie was a big part of my music for four plus years. I just think it was time to move on. I can't imagine continuing on and doing some of the things that we were doing without him, that's for sure."

Lyrically, a number of the songs on 'Everything That's On My Mind' deal with the death of Charlie's own father, yet there are no references to Vinnie's death. When I ask Charlie if it was harder for him to accept the death of Vince Ebo, he answers very quietly, "Of course it is. I think it is very hard to accept the death of anyone who does this and has his life laid out before him. And particularly someone who professes to have a heavenly hope. So it makes it extremely difficult and confusing and there are no easy or simple answers for it. It takes a tremendous amount of time to process it. Whereas when someone has a heart disease like my father, and may have, granted, more years to live than you thought he would, then you accept it was time to go on some level. Of course you struggle with it, but at some point you have to accept that. I have not, I have no other way to accept Vinnie's death other than just one poor and sinful choice, committed by a sinner saved by grace in a long line of poor and sinful choices."