Feted by the man most likely to crossover into the big time CHARLIE PEACOCK appears to have retreated from the frontline. Or has he? Tony Cummings finds out. 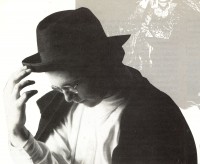 In 1984 Charlie Peacock had an album released by A&M. In 1986 Charlie had an LP out on Island. But this year the California-raised singer/songwriter/producer released his finest album ever, a pulsating, soulful and intelligent set called "The Secret Of Time'. The label? Now there's the rub.

The news that Charlie Peacock had been signed to Sparrow Records - home of Carman, Steven Curtis Chapman and a dozen more sub-cultural favourites shook to the core Charlie's vociferous 'cult' following who have long tipped Charlie as a Christian muso with the chops to sell platinum.

By recording not with a major but with a 'Christian music label' Charlie seemed to be calling all that into question.
About his new album for Sparrow Records Charlie Peacock comments "I think there's been a focus, a bit, on refreshing the hearts of the saints. It's not so much a change musically, it's more likely in the attitude of the heart."

Charlie is refreshingly forthright both about the move to Sparrow and the decision to break with Exit Records, the record company who had leased his 'Lie Down In The Grass' to A&M and his 'Charlie Peacock' album to Island and who for ages struggled to put artists like Peacock and the 77s into the 'secular' mainstream.

Comments Charlie "Every artist wants to have their music heard by hundreds and thousands of people. Have you found an artist who didn't? One thing that I've always disliked very much is labels, and categories, and as long as you know me I'll never change. By signing with Sparrow Records what I got was the opportunity to work with some people who have the machinery to allow people to hear my records.

"It's not so much that I've gone from being this alternative radical, chic 'artiste', and that now I'm this CCM glamour boy. But what it really is is that I searched for another secular outlet - it took two and a half years, and I couldn't find one. I prayed and prayed for the opportunity to come along. It was a big and very difficult decision for me to make, but finally I asked to get out of my contract with Exit - who were shipping my demos to various companies who basically did not have any interest. I kept asking the Lord 'why, if this is what I'm created to do?' And basically, the answer that I got was one of silence. And with that silence came no interest from any of the secular record companies, apart from them saying: 'Charlie - we love what you do - you're great, one of the best songwriters that way, but right now we're just not interested in doing your records'.

"Musically, I'm here to speak what's going on in my heart and Sparrow offered me the opportunity to do it. Also, if God should decide. Sparrow also have the machinery in place to put a record out to the community at large. But do you know what? Capital wasn't interested in my records, they just didn't like them."

Charlie's story begins in Yuba City in North California where Charlie Ashworth's (he adopted Peacock as a tribute to jazz muso Gary Peacock) father gave up his job with a telephone company to teach orchestration and jazz improvisation at Yuba College. Remembers Charlie, "We would always have different instruments around when I was a child - a string bass in the hall, a drum set, clarinet, all kinds of things. So when I was a little boy I started playing different instruments. I didn't play any of them well - I just had the opportunity to play around on them. I had the benefit of being around my father who could teach me about music and I would ask him questions about music, and as I got older and started writing my own music, he would help me to write out the notes, and just help me to understand the rhythms. I would ask "how would you write this beat out Dad?' and he would show me how to count it out, and write it down."

Charlie is not absolutely sure at what point in time his Christian life began. "I've often wondered about the commitment I made to Christ as a teenager, if God did hold me accountable for that. And though I drifted away for ten years - as far as a person could get - I haven't quite figured out if God was just bringing me back to where I was, and there was a continuation from that time, or if the latter experience was the beginning." Charlie's first encounter with Christianity was through his mother.

"We went to church on and off, when I was growing up. Then my mother had a very distinct, experiential kind of thing where she committed her life to Christ after a long illness and a stay in the hospital. So she got all of us interested in going to church. That was at the end of my 8th grade, and in my freshman year of high school I really wanted to go into the ministry, go to Bible College, very much interested in the things of the Lord. Then I got a girlfriend, and got more interested in being with her than in being a Christian. Fortunately I married that girl, and I'm still married to her.

"I was involved in music in high school, started playing in a band in my freshman year. I couldn't say that at the time I was going to become a professional musician because I had great interest in writing too, and fancied becoming a novelist or a poet. When I went to college, I probably had more emphasis in wanting to do that. Then I dropped out of college to play in a steady nightclub gig, because we - I was married by that time - needed the money."

Moving with his wife to Sacramento in the mid-70s Charlie tried to eke out a living as a musician. But sadly booze was beginning to take its toll on the musician. Charlie quipped at a Green-belt seminar a couple of year back "I had a drinking problem...I kept spilling it." But the reality was far from funny. "I would play at a bar because I could drink for free. But the drinking completely consumed me. I ended up checking into mental health. I had counsellors, various doctors, and finally found a doctor who was hard enough to say "Look, you either get involved in a recovery programme or you're going to die or go insane'. After that I started putting my life back together, and started getting some professional help. I was attending Alcoholics Anonymous meeting four times a day. My wife let me come back and live with her and she found a house that was about two blocks from the biggest AA meeting in Sacramento...There was an intense struggle for my mind, at that time I had no idea what was really happening in the spiritual realm. I would pray every night and every morning that God would grant me the patience and it's pretty much like the song 'My Mind Played A Trick On Me' - "If there's a God in heaven, hear me, resurrect me."

"We were living on government assistance, and I wasn't making any money. I couldn't work for quite a while, because I was real sick, real crazy and had a really violent temper. I was out of it. I got a call to play a quality jazz piano gig at the top of the Holiday Inn. Before, I would never do gigs like that, because I was an artist. I was too good for that. But I had been praying for work, and this fellow called me, and I knew he was a Christian, and he asked me to do this gig for, like, 50 dollars.

"About a month later he called up and said, 'I don't want you to think this is weird or anything, but God's been telling me that I needed to ask you if you wanted to get together and pray.' And I didn't even hesitate, so in about 15 minutes he showed up at my door. He kind of outlined the gospel to me and it set off those memory banks that I had known that before, and I believed, basically, I believed what I heard. And God prepared me with the faith and straightened out my brain cells and my physical being enough to be able to comprehend what was being said to me, and I prayed with the fellow then and asked the Lord to be in my heart, and to guide me in my life. In about 11 months, I went in with Jimmy, who had been playing with my band, and started working on that first record. Vector's 'Mannequin Virtue'."

Thank you for taking the time to share the journey of Charlie's life in Christ with us. Well done!