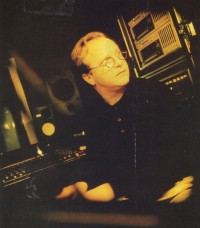 Charlie Peacock wears his fair share of hats: searingly intense singer/songwriter whose occasional appearances at Greenbelt (he's there this year) have endeared him to British audiences; successful record producer whose work on albums for acts like Margaret Becker, Out Of The Grey, Cheri Keaggy and Lisa Bevill have been big CCM sellers; record executive whose Re:think Records have put out marvellous albums by Sarah Masen and Charlie himself. But it's Charlie's reputation as a thoughtful analyst of today's culture, a man who has deeply pondered the tensions and tests of what it means to be a follower of Christ in the disjointed information-overkill of a post-modernist world which has brought some much needed overview to the sometimes shallow realm of Nashville consumerism. Flicking through interviews old and new, we have assembled a selection of Charlie's thoughts on subjects ranging from using computers, his father, sin and the nature of art.

The Language Of Christians
"The idea behind (the song) 'Strangelanguage' was to highlight the fact that there is an element of what it means to be a Christian that is supernatural, that there are certainly times when we may think thoughts or articulate ideas that simply cannot be processed by someone who doesn't know Christ because it may be just confounding. It may be so contrary to their existing worldview that it may spin their head around. But really, in terms of the song, the idea is to take the notion that Christians speak a different language and kind of shine a light on it in a positive way, rather than the negative way we do-when we talk about 'Christian-ese' or an exclusive language."

Using Computer Technology To Create
"I'm not a manual-reader. I don't have to know the ins and outs of why something works for me to use it as a tool. So I'm more about identifying things as being potential tools for art-making, thinking, something that amuses me. I like to look at something and imagine what I think it can do and then go explore and find out whether it can do it or not. More often than not, if the hardware is well made and the software is good, generally I'll get close, then I'll find out its limitations and I can kind of dream some dreams along those lines. Then I'll find out that others are dreaming those same dreams and are making software that can fulfil my dreams."

Sin
"I'm always looking for a fix, something to kind of soothe the pain of the human condition rather than going to Christ, rather than going to prayer, rather than seeking fellowship with other believers. It's so easy for my heart to do 'a-whoring after the world.' I've come to see that I'm not a man who sins a lot, I'm a sinner. My whole being is just riddled with sin, and every day I want to choose something other than God. God is an assault against my own independence, against my own sovereignty. That is something that just levels me, to see the extent that I will go to make life work apart from God. There is no distance too great, no height too high for me to jump to try to get away from God.

"When you talk about a fix, one thing you learn after a few years of being a Christian is that there is nothing, no matter how noble it may appear, that is beyond being corrupted. Nothing, no matter how 'Christian' it may appear, is beyond being an embodiment of sin. It could be the recording; it could be the fact that I enjoy reading. There's a lot of good that can come out of the life of the mind, but at the same time if that becomes just a distraction to keep you away from an ultimate relationship with Christ, then it is of no value either, is it? There should be nothing beyond suspicion in the Christian's life, and we should be willing and ready to let it all go if that is what is required. It's really hard. Who's going to challenge you? Who's going to challenge me?"

Assessing Where We're Going
"If we're so much in the flow (of life) like being in a high Sierra river after the first snow and it's just plummeting across the rocks and it's not possible to go any way but the way that river's going, you can't pause to assess. In Genesis we see the biblical mould for creation, you see that God created and then God assessed and then God rested. He assessed first. He stood back and said, 'This is good.' We can't do anything less than that. We have to make some kind of judgment call, some kind of discernment of where we are in the process and if you're having trouble with it yourself, then you go to your friends and talk to them about it. You go to people who have spiritual authority and ask them about it."

Perfectionism
"First let me just make a generality. I think the people who are most alike, I mean really, really alike, tend to produce the most sparks. I'm definitely my father's child. I'm version 1.2. My dad really contributed to me being a perfectionist and I don't use that word in a positive light by any means because I think it's a very dangerous thing for a Christian to be. The healthy side of it is a motivation towards excellence. The downside of true perfectionism is usually trying to make life work apart from Christ. It's a lot of times tied into earning love and earning affirmation. Oftentimes, it plays itself out in that no one else around you can ever do anything good enough because you can never do anything good enough.

"I have to admit that I would not be equipped the way I am musically if it were not for my father and that I would not have chosen some of the discipline that he put on me, but the fruit of it... let me see, it's hard for me to unpack this... with my dad, basically, nothing was ever good enough. The mental motivation of that is that if it's not good enough, then I have to try harder. You could maybe see that as a pursuit of excellence or a strong work ethic, but really what motivates that is the heart gets mixed up. I think the goal is to teach a child not that something isn't good enough, but that you do all you do as unto the Lord and you keep reinforcing that. My dad didn't have that language to use at that time. He just wanted me to be the best that I could be."

"But that motivation towards excellence often took the form of language such as, 'If you're going to do something halfway, then don't do it at all.' When you hear that stuff as a little kid, then you wonder what 'all the way' would look like. And you keep trying to find out what 'all the way' means. Then later when you get to be 38 years old, you realise that there's no such thing as 'all the way'. It's impossible. Perfection is totally impossible. That's why you can never totally fulfil your earthly father's expectations because the expectations were impossible. You realise that it's got a false bottom, and that you're falling, you're just drifting in space. I've had to do a lot of forgiving and look at my own life and take ownership of my own sin in the midst of that."

Looking For Approval
"I'm basically...an approval suck. I want people to like me. If it's not me wanting my dad to like me, then maybe I want you to like me. Being an approval suck is just living for everyone's approval all the time. What's so wonderful about being a Christian is that I don't have to live for anyone's approval. I definitely don't have to live for God's approval because I've been approved through Jesus Christ. I'm investing myself in that heavenly hope rather than looking back to the tension of the relationship constantly. I address it and I own it, but I'm more apt to look for my own sin... I had about 12 years with my father as a Christian and that was great. It more than made up for any pain in the past."

Imagination
"I think Christians are kinda divided into three categories. Like most of the world: there're those who don't believe that they really have an imagination, they would say, 'Now, my sister... she's the imaginative one. I'm not imaginative.' To me, that's a violation of what it means to be created in the image of God. That's kinda like living in denial of who you are and how you were created. The second one may be that they're afraid to imagine, there's some fear that's blocking their ability to imagine. The third would be those who are experiencing the freedom in Christ and therefore having the ability to imagine more than the brother or sister next to them. The middle category, which is the one that always concerns me most, deals with people being paralyzed by their fears. Some of those fears are very warranted, perhaps some horrible thing has been perpetrated against them which they have yet to resolve and work through as part of what God is doing through them to bring healing.

"But imagination grows in an environment of freedom and true freedom doesn't exist (except) in an environment
of love. That's why the Scripture says, 'Perfect love casts out all fear.' When you know that there's nothing you can do to make God love you less, and you can truly own that idea and in a sense preach the gospel to yourself day in and day out, then you've got a starting point for that freedom for what it means to be a son or daughter of the living God and the freedom to imagine and to chase after those things you imagine."

Charlie Peacock As CCM's "Intellectual"
"I'm aware that there's a certain perception of me sometimes that I'm kinda just an upstairs person...cerebral, that you may not want to invite me to a Jim Carrey movie. But that's not true, really. I might be found sitting next to you in the theatre. I like to goof off too, to find some sort of release or relaxation. The story of the song is to just wake up in the morning, put on some Aretha Franklin and dance around your living room. It's sort of telling myself that that's okay. Just because we live in the light of eternity doesn't mean that we don't celebrate the now.

"The danger is that to live a real cerebral life is to exclude people, where you can become so enthralled with the inner relationships of the thinking within your mind, you don't need significant relationships outside of that. That's a definite problem for people who spend a lot of time in their minds thinking. I think those are the kinds of people who most need relationships, to rub up against other people and their thoughts.