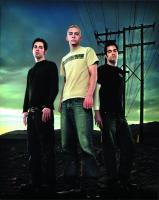 It's not that often that a Christian rock band gets a UK release where the album has already gone platinum Stateside. But that's the case with Chicago-based Chevelle whose 'Wonder What's Next' album for Epic has been flying off the American record shop shelves for many a month. Chevelle are made up of brothers Pete Loeffler (vocals/guitar) Sam (drums) and Joe (bass). Although it's not unusual to find a band made up of siblings in the pop charts, to come across three brothers that are self taught and this talented is a true rarity.

The album was recorded in the wake of 9/11, and the band had to endure some ill-timed ribbing from their nation's neighbours as they recorded in Bryan Adams' Warehouse Studio in Canada. The result, however, is a much more polished, professional and diverse album from their 'Point #1' debut. They chose to have the record produced by stuttering legend GGGarth Richardson (the studio whiz who brought us Rage Against The Machine), after hearing the latest Mudvayne album. Said Joe Loeffler, "He's all about every bit of electronics that you can use that you think will help the band sound cooler."

Peter Loeffler explained in HM magazine how the material for their 'Wonder What's Next' came about. "On this record, the plan was to write some actual songs as well as being heavy songs. We thought about the melodies more. Touring with heavier bands (Static-X, Powerman 5000, Machine Head, Sevendust), you'd see the crowd respond to the stop and start motions of the beats. I think the songs 'Wonder What's Next' and 'Forfeit' definitely pursue those things. 'Wonder' is probably one of my favourites to play live, specifically because it's kind of a heavy rockin', nod-yourhead- to-it song. It's fun for me."

Before Chevelle tasted the big time, they recorded an album for Squint Entertainment in 1999. Produced by Steve Albini, the legendary studio man who brought us Nirvana, recording 'Point #1' wasn't a happy experience. Commented Joe, "Albini doesn't produce anything, he does everything flat, flat notes, nothing hi fi at all." If that was painful, worse was to follow. A legal battle ensued as Word Records sought to wrestle Squint away from its founder Steve Taylor. It took heavyweight lawyers before Chevelle could escape from the legal empasse. They were left wondering if they would ever get a second chance, or was their final tour with Filter to be the plateau of their careers? As Joe put it, "We weren't sure if anything was going to happen after that, it was pretty crazy." Much to the delight of metal fans, it wasn't to be the end for Chevelle.

Although they are one of rock's most humble bands, you get the impression that they desire a lot of creative control, with everything from their production to the video shoots. Things did not go smoothly in the studio, as they were keen to make sure that this album truly captured their sound. "I got sent home after a month. I didn't get to do anything I wanted. I recorded bass exactly the way he wanted, on the bass that he told me to, on the amps he told me to. He said, 'I want you to play a certain bass,' and I said no. And he goes, 'You say no to me,' and he flipped." One thing the band did not want was the "Christian band" tag, that they acquired from their days with Squint Entertainment, an openly Christian label, but as Joe pointed out the band may have been misled. "They said they weren't a Christian label. But they lied." In fact Chevelle are quick to dismiss any direct link between their faiths and the music. "Everybody, whatever religion you're from, you write music that is either good or bad. So one Buddhist could write a song that is happy and nice, and another could write one that is real angry. I mean Beastie Boys are Buddhists, but they're not a Buddhist band." Joe feels that certain bands have been using the "Christian band" label to increase sales. He said, "The truth is what people should hear, we shouldn't be trying to trick people by saying they're a Christian band when they're not." The band claim that they were just desperate for a deal in their early days. "If you get your first offer as a new band, what are you going to say? No?" 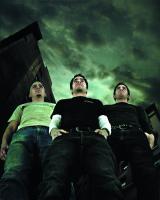 Fans that have followed Chevelle from their early days, including an appearance at the Cornerstone Festival, will no doubt question the spiritual direction of the new album. But even the most righteous of fan, however, will find it hard to knock their clean, wholesome image as they avoid any use of profanity or crude comments on their Epic album. Although they have chosen music as a career over ministry, it is still great to see a positive band sharing the main stage at Ozzfest with acts like Korn, Marilyn Manson and Ozzy Osbourne. Said Joe, "Ozzfest main stage, it's a huge tour. We did second stage last year at Ozzfest and this year we get to go back which is awesome." One thing's for sure, Chevelle have come a long way since their modest beginnings. Joe added, "The new album has just gone platinum, which is a million sales, and the first album did about 100,000 which is not even one tenth of that."

I luv this band. But this article is wrong about one thing: They are NOT a christian band! There is swearing in one or two of their songs.

you and Alice in Chains are my favorite bands ever... you guys should really thing about doing a concert somewhere up in Ohio like in Cincinnati

I've been searching all over the internet to try and find out what type of guitar, pick etc. Joeseph Loeffler uses. Colud anyone tell me?

Joes Bass is An Ernie Ball i think hes out though
AMP ampeg or mesa
Pete has Paul Reed Smith guitars with mesa boogie heads and cabs, oarange amps and Bhogs Petes guitars are custom 22's that are built for him

He used a Music Man Stingray and the same yellow dunlop picks as Pete.

chevelle is NOT CHRISTIAN ROCK.

I never knew they were labeled as a Christian band before i started to listen to them. After I heard what label was attached to them it bothered me none. They are very good songwriters and great muso's. That's what counts.

Why did this article open with "...that a Christian rock band..."? I though they dismissed links between Christianity, or any faith for that matter, and their music. Moving on, I love Chevelle's work, and I really hope they continue with their unique and inspiring sound. And maybe they should come play a gig in my town...

i love chevelle they r the best band to listen to. they totally influence me they bring me up when im down.

I saw Chevelle at the emerald theatre in Mt Clemens
Michigan. There was an energy in the air so thick you
could cut it with a knife. I was surprised that almost
everything was drop D (tuning for you non-musicians)
I guess that makes it easier for Pete to play since he is the guitarist and singer. I am sincerely surprised that the band is not more popular given their songs and their talent is better than many more popular bands out there. I teel people all the time check out Chevelle... they go who? Isn't that a car? I think you guys need beter promo

Totally love the drummming.. inspired me to learn to play.

I have been listening to music for a very long time and I love this band ! So obviously multi-talented indeed. Sexy lead singer voice, guitar playing makes your body wanna move and then there's the drums Oooo... BABY!!

For more on Chevelle visit the Chevelle artist profile