Chloe Reynolds: The Gloucester-based singer songwriter both broken and beautiful 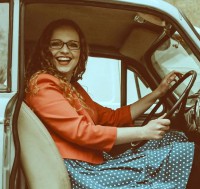 So often, it's very easy for music writers to get cynical and sceptical about young, enthusiastic new artists. I made that mistake with Chloe Reynolds upon hearing her debut album, 'Broken Beautiful'. Released in the autumn of 2016, I felt that the opening two tracks were lyrically naÃ¯ve. What followed was an album remarkable for the maturity of the playing, arrangements and songwriting, showing a high level of honesty and integrity. With the front sleeve image showing the Gloucester-based singer/songwriter looking out through what looks like the ruins of a bombed-out property from the Blitz, I was intrigued to find out more about the Chloe who seemed to wear her heart on her sleeve - and a broken and contrite one, at that. I began the interview by asking Chloe about her early years. She responded, "My grandmother is a fantastic pianist. As a young lady she won a scholarship to a prestigious music college, but was not given permission to attend. I didn't learn this about her until I was an adult."

Chloe's musical epiphany came through the vehicle of a Hollywood blockbuster. She remembered, "My Dad took me to the cinema when I was young to see Sister Act 2. There are several scenes in this film that, whilst watching them and hearing the music, I had to remind myself to breathe. I think it was watching this film that made me realise I wanted to sing more than anything else in the world."

Ah yes, a bit of divine intervention! Along with Whoopi Goldberg, a young Lauryn Hill also appears in the movie, pre-Fugees. This would be circa 1993. Was it around then, I asked Chloe, that she started buying music? "One year, I used my Christmas vouchers to buy 'Now 27'. I listened to it until the tape wore out. The first album by one artist I bought was 'The Miseducation Of Lauryn Hill'. . . on TAPE! Ha - I'm showing my age now!"

Who are her influences now? I wondered. Listening to her album, a couple of tracks remind me of the new chart performer Jess Glynne. Her humorous response was surprising. "I love listening to all kinds of music. Emeli Sande, Gungor, Bethel, Alicia Keys, Evanescence. . . so many! I'm definitely inspired by female vocalists with a message. I hugely value listening to independent artists too, and artists who enjoy covering well-known songs in an unusual way. You're not the first to ask if I've been inspired by Jess Glynne. . . it's the hair, isn't it?"

As Chloe had namechecked her, I asked her about Emeli Sande. "Before Emeli Sande was a well-known artist I saw her perform at an Alicia Keys concert at the Royal Albert Hall. Emeli was the support act. Accompanied by just a 'cello and acoustic guitar, Emeli put her heart and soul into her performance. I was in tears by the end. She meant every single word and sang with all her strength. It was this that inspired me. When you know you are supposed to sing, do it with all your heart and your audience will be moved. That's the lesson I took away from that incredibly moving performance, and one I try to live by when performing today." 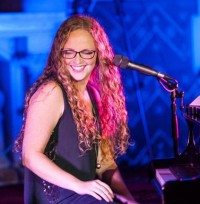 Chloe had also mentioned Evanescence. I admitted I couldn't imagine her being a fan. "Lots of people say this about me! I'm a fan of many different kinds of music, and although I wouldn't say metal is one of my go-to genres generally speaking, every genre is right for something. Metal is great for driving home, late at night! I often find metal to be a bit inaccessible because I can't sing along to it. I especially like Evanescence because they're something I can sing powerfully to - great guitar riffs and epic drums, with a vocal in my range."

In Chloe's songs, in her lyrics, there seems to be a lot of yearning. Was it a conscious yearning for God, or something which naturally came out of the writing and recording process? "I think yearning is something that every single human being can relate to. We've all felt it. The songs are a reflection of my journey with God at the time of writing them. I didn't set out to consciously write songs about yearning for God, but I guess for Christians it's so important in our lives that we do just that. It was bound to come out as a recurrent theme!"

Chloe began recording in 2012, releasing the EP 'Unresolved', and two years later a second EP, 'Through Your Eyes'. But then she was ready to record her full length debut. Chloe spoke about the crowd-funding for 'Broken Beautiful'. "Using crowd-funding to raise the money for recording was so encouraging. To know there are people out there who believe in my music enough to back me was huge. It gave me the motivation to keep going when I felt like giving up. Being a solo, independent artist can be quite a solitary experience at times, so knowing I had a team of people waiting for the new album was great. I couldn't have done it without their support."

The singer/songwriter spoke about her album's title track. "'Broken Beautiful' came out of a time of complete writer's block. 18 months, to be exact. I sat with Philippa Hanna in the studio, explaining how I didn't want to write a sad song, even though I'd been going through a difficult time. I wanted to write songs of hope and encouragement. In trying to explain how we were going to turn a hard 18 months into a positive song, we wrote 'Broken Beautiful'. It's better than I ever could have hoped for, and I'm so happy it's a song others can relate to. After that, the floodgates opened! Songwriting came back to me and I felt a huge sense of determination."

Chloe was fulsome in her praise of 'Broken Beautiful''s producer. "The album was recorded with the wonderful Aron Bicskey from Resound Media. He is a fantastic producer to work with. He really encouraged me to step out of my comfort zone vocally and be the best I could be. We laughed together a lot during the making of this record and I can't wait to work with him again. Hmm, I wonder when is too soon to start the next album. . .!"

For now, Chloe Reynolds is coming soon to a theatre, cafÃ©, church, arts' centre or even private residence near you. A performer who is likely to take the listener on a journey through a landscape of joy and heartbreak in equal measure, she refreshingly owns up to feelings of failure and doubt, as well as empowerment and faith. Heard it all before? Not like this you haven't.