Chris August: The Dove Awards' Male Singer Of The Year 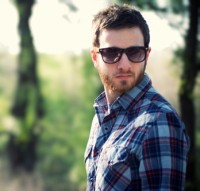 The announcement from the Gospel Music Association's Dove Awards for 2011 that the Male Vocalist Of The Year was Chris August stunned many Christian music industry people. Afterall, Chris was a "new" artist whose Christian music debut album, the critically acclaimed 'No Far Away', was released in 2010. But as so often happens, Chris was not some fresh faced newcomer but an artist with years of industry experience. He has worked with R&B star Brian McKnight and pop princess Jessica Simpson and before his CCM breakthrough was signed to Geffen Records. Now the 29 year old multi-talented singer, songwriter and producer with a compelling pop/R&B style unexpectedly finds himself the hottest property in Nashville.

Chris August Megert was born on 20th March 1982 and grew up in Garland, Texas. He admitted, "I grew up around music. I absolutely loved it. I was constantly listening and singing along with The Beach Boys, Chuck Berry, Elvis, The Beatles and my favourite, Stevie Wonder. However, my involvement with music as a child wasn't limited to the record player. My dad had put a home studio together that consisted of a few guitars, keyboard, drum machine and the standard four-track recorder. I would pluck around on each of these, but didn't get serious with them until years later when my dreams of being in the NBA fell through because of asthma...and a lack of talent."

At the age of 15 there were massive changes in Chris' life. He wrote on his website, "This was the year that I would start playing, writing and recording music; and most importantly, become a Christian. I was suckered into going to church by a cute girl in my Spanish class. It just so happened her youth group met at a place that was known for its break dancing. I arrived Sunday evening (Adidas wind pants and all) ready to show off and perfect my Usher-like moves, only to find out there would be no break dancing, but instead, a church service for teenagers. I would have been mad, but there was free pizza and who can complain about that? The reason for me getting to church wasn't the best, but once I was there I heard the Gospel. Week after week. I had grown up with Christian beliefs my entire life, but I was finally starting to understand what giving my life to Christ meant. I now had two new and unrefined loves in my life. God and music."

For his 15th birthday Chris had been given a keyboard. He recalled, "I got to personally pick it out. It was small, cheap and from Service Merchandise. I can still remember watching my future slowly crawl toward me on a conveyer belt. Along with it came a book titled You Can Play Piano. Patience was not my best quality as a young man, but fortunately I stuck with the instrument long enough for that book title to come true. While at church, I had gained a love for worship songs. As I learned to play more and more of them, I was asked to help lead the music for the youth group. I would show up week in and week out with my keyboard, amp and a binder of songs to sing to God with my friends. My faith was growing and so were my musical abilities. It was then that I added acoustic guitar to my repertoire, opening the door for me to sing, perform and travel." 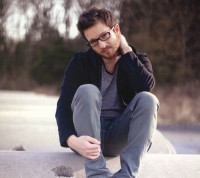 He continued, "Over the years, I started adding pieces of recording gear to my collection. The moment I was done with school I would immediately come home and work on my latest song. At age 22, I was finally ready to release my first self-produced, recorded, mixed and mastered independent album ('A Beautiful Thing'). It had been finished for about seven months when my life took a dramatic turn. A singer/songwriter named Ryan Cabrera had gotten a hold of it and wanted to work with me. Within two weeks of Ryan hearing my music, I signed a management deal with Joe Simpson, father of Jessica and Ashlee, and a record contract with Geffen Records."

Moving to Los Angeles in January 2005 to work on his first album for Geffen, the young musician was suddenly rubbing shoulders with some of the leading lights in the pop and R&B industry. He helped with producing records for Brian McKnight and Jessica Simpson and as well as playing keyboards on Ashlee Simpson's tour he also opened for the star. Chris toured with Ashlee for the next year.

But then in January 2008 things suddenly went pear-shaped. After restructuring at Geffen he found himself out of contract. Returning to Texas the downturn in his fortunes proved to be a spiritual wakeup call. He recounted, "It had been two years since I was involved with a church. I missed leading worship. I missed writing Christian songs. I missed the feeling of conviction. I started playing keys at a nearby church called Lake Pointe Firewheel. As I got involved with their ministries, I ended up leading their worship pretty frequently. It felt great to be playing Christian music again. I had been back in Dallas for a year when I realised how long it had been since I had written a Christian song. Sure, I had worked on some inspiring type of music while on Geffen, but nothing overtly Christian. I wanted to write a song that was a rededication of my music and my life to Jesus. On January 18, 2009 I wrote 'Starry Night'. Little did I know this song would change my life."

A worship-orientated paean to the Creator God, "Starry Night" was very much a restatement of the sentiments expressed in the oldie "Great Is Thy Faithfulness". On Chris' composition the songsmith pondered, "From the birds that sing in the tallest trees/To the human life of you and me/From the desert sands to the place we stand/He is God of all, he is everything." The impact of "Starry Night" was far-reaching. Continuing his story Chris remembered, "My indie release of 'Starry Night' had somehow made its way to Nashville, Tennessee, and in the hands of an A&R person at Word Records. After meeting with the staff and president, I knew Word would be my new home. I decided to pack up and move to Nashville and start the next venture of my life. The following few months were spent writing countless songs. Well, I guess not countless. I wrote about 60 songs in three months. It seemed countless at the time. After picking out our favourite 11, I teamed up with producer Ed Cash to record the album. Ed has always been one of my favourite producers so it was a pleasure for me to do a record with him. He challenged me not only musically, but spiritually as well. With a couple days left before we were set to record the album, Ed told me he felt like I still needed a personal song. Unaware of my family background, he asked me to go home that night and write about what hurt me growing up. I wrote the first verse of '7x70' later that evening."

The next morning Chris returned to Ed Cash with his first verse. He remembered, "Ed looked over to me with tears in his eyes and said, 'This song has to be on your record and it has to be about forgiveness.' This was the last thing I wanted to hear and have to deal with while making my album, but nonetheless it was something that needed to happen. The following few days consisted of us being surrounded by the Holy Spirit like I've never felt before. This was, without a doubt, the most personal song I had ever taken on and it required a mind set on prayer.

"I come from a broken home. Better yet, a broken family. Parents screaming at each other. Frustrations were commonly taken out on my brother, my sister and myself. As the lyrics started to come to mind, so did all the memories of my past that I hadn't thought about in years. Some lines bringing smiles and some bringing another set of pains that I needed to forgive. It was through this song that I was able to forgive and be healed of that pain. I hope others can use the song in their own journey to forgiveness."

Clearly, tens of thousands have. After the number one radio success of "Starry Night", "7x70" has followed it to become a US Christian radio hit. 'No Far Away' contains several other top rate cuts. The title track is based on Psalm 139 while Cross Rhythms Radio has chosen "Want To Be Real" and "It's Always Been You' for its playlist. Since the album's release Chris has toured the US, first opening for Point of Grace and then joining the Winter Jam 2011 tour alongside the Newsboys and Francesca Battistelli.

Recently the thesoundopinionblog website asked the newest CCM star what he hoped an audience would take away from his concerts. He responded, "From the album you probably couldn't tell, but from the concerts, it's pretty obvious that I'm a pretty goofy guy. I don't take myself very serious. well, I do when the time calls for it. But most of the time, I'm pretty goofy. For the concerts, I want people to have a good time, enjoy themselves and laugh. I think it is a good thing for people to sit back, laugh and forget about some of the hurt and other things going on in their lives for a little while. At the same time, I think the most important thing and the reason why I do this is to write songs that people can relate to and dig into. Hopefully, it will encourage them and inspire them to live for something greater than themselves. For me, that's what writing is all about and being able to connect to people. Hopefully, I can say something about my life that I've experienced and it will connect with someone. Hopefully, someone can grab onto that and can express their heart - maybe in a way they wouldn't have thought about expressing it and can help get their words out. That's my main goal as a writer."