The financial stories of CHRIS COLE and artists After The Fall, Pray Naked and Rachel Friend 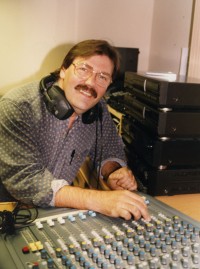 In America it's a half billion-dollar industry. In Britain it's a growing scene which after a decade of steady but unspectacular growth could be set to explode thanks to spearhead acts like Delirious? and the World Wide Message Tribe, a vibrant festival circuit, exposure on radio and TV and increased sales for the hundreds of albums that flood into the record racks. To find out more about the financial aspects of British CCM we are asking dozens of artists, concert promoters, festival administrators, record executives and others to lift the veil on their financial activities. Our series begins with the inside financial stories of artists After The Fall, Pray Naked and Rachel Friend and Cross Rhythms CEO Chris Cole.

Chris has overall responsibility for the finances of the ministry. Firstly, you've just come back from the GMA week in America.
Has your time there brought you any new perspectives?

"It's just been announced that today Christian music is a half a billion dollar industry in America. But consider this, 43 per cent of Americans are church goers but only four per cent actually support that industry, they don't visit Christian bookstores, they don't buy Christian albums. So in The States the Christian music scene hasn't really grown up within the life of the Church, it's almost grown up separate to the Church. Only two per cent of Christians listen to Christian radio. I think that the opportunity we have in Britain through things like UCB, Soul Survivor, and Delirious? is integrating the life of CCM within the fabric of the Church. I think that integration is something that Cross Rhythms is committed in doing." Biblically, principles of Gods kingdom should be the foundation of church structure and not the other way round, but that's another article.

For many, many years American CCM dominated in Britain. But today in Britain the top four selling CCM artists are British - Delirious?, Iona, Matt Redman and the World Wide Message Tribe. What are your feelings about this change?

"I think we've got a real window of opportunity. I think the British have always been quite innovative as a nation and we're not afraid to experiment so things like Delirious?, with young people worshipping in a very contemporary style and the way that World Wide Message Tribe and the dance side has started to hit the US, is very exciting."

The latest Cross Rhythms Directory lists hundreds and hundreds of CCM artists who haven't got a record deal and who've got very few gigs. For many CCM artists in Britain, the scene is a huge struggle.

"Sure, but a bit of suffering creates good art, and, to a certain extent, to develop mature disciple-ship and a real perspective of faith some of these artists are going to have to struggle. If Delirious? can come through, if Iona, Matt Redman, the Tribe can come through then it is possible to do it. But people are going to have to fall back on their faith, and check their motivation. You and I both know the cost of sticking in with something where there are little or no tangible rewards. That's faith. Faith is the substance of things hoped for. At the end of the day God has been totally faithful to the work of Cross Rhythms, but if I was to sit down with a business analyst and an accountant and look at what we've been trying to do, I don't think they'd necessarily understand the work we're doing."

Tell me about the financial cost to you personally to birth the Cross Rhythms ministry.

"It's cost me thousands and thousands of pounds which God has put into my stewardship through my own business. For me, when God saved me I realised that from then on everything I had came from Him, even my secular business. This is where we need to challenge the dualistic thinking in the Church that says 'here's the sacred' and 'there's the secular'. God was blessing my business; it was an advertising agency that dealt in both the secular and the Christian market place. For me, I felt if God was blessing my secular business - I can't compartmentalise my faith, and that my business was to be used for the work of the Kingdom. That translates to 'if you're working in a secular job and you're a Christian musician, then don't moan because legitimately God can resource your ministry through your paid employment.'"

Cross Rhythms has over the years got most of its finance from your business. Do you think artists could see a modus operandi for themselves in what's happened to Cross Rhythms?

"I think there are many bands that do that. Artists like After The Fall, The Electrics, Split Level, Dave Clemo; many more have been working in CCM for years with that kind of attitude. The musicians themselves .need to create a forum and maybe use Cross Rhythms a bit more to communicate more effectively, especially to the church, the reasons why they're doing what they're doing. Artists can learn a lot from the way Cross Rhythms has been financed. Cross Rhythms has never been resourced by the Church but in that we've learned Kingdom principles. Our Father in Heaven has kept us going. Sometimes God's taken us close to the line to test our hearts and to say, 'Look, in the eternal value of this I'm more interested in what I do in you than even what you do for me.' Now that's a key point. We've got to remember that many musicians out there might be looking for affirmation from Christ in doing their music. Some don't realise they've already got that.

We've already been saved by grace; it's a question of learning to mature and to examine our motivation of why we're doing things. That's a pastoral thing and I don't know if you can easily impart that (revelation) to the heart. You would have to sit down with Joanne Hogg and say, 'Why did you leave a possibly lucrative medical profession to sing with Iona?' I don't know if you can formularise the whole thing too much. But every musician needs to be very clear as to why they're working in CCM."

Clearly, having a genuine 'call' from God is vital if a Christian musician is to make headway.

"Each individual Christian has to work out his or her calling. It's very dangerous, in my opinion, for other Christians, even leadership, to take the place of Christ and give that person direction in what they should be doing with their lives and talent. At the end of the day, Jesus saves souls, and not the church. Leadership should nurture people into the headship of Christ. It's a long journey, some people are going to start out in music and may end up in medicine, some people are going to start out in medicine and end up in music. It's not going to be that clean cut and dried. This is a broken, sinful world. In my own case, God told me very powerfully through a prophetic word that I would be used on radio. (To be totally frank, if I'd listened to some church leadership, I wouldn't be in radio today.) I didn't seek that, I just knew that I was to be on radio and I tried to remain faithful in that. It was tested quite severely over the years by the Lord to make sure that I would have the character to carry the responsibility of that and allow Christ's grace to come through on that. But you can't teach that. Some people out there are going to really be used powerfully by God in music throughout their lives. Others are going to do it for a season only. What musicians need to discover is that their real fulfilment isn't in the music or the ministry - it's in their faithfulness to God. At the end of the day it's just doing his will. I know God is more excited about what we become than what we do. I'm sure he gives us our destiny in order to perfect what we become. But we live in a culture that affirms what we do. That's the danger of the Church. I think that's been one of the dangers of the Christian media. It's tried to relate to American culture and not necessarily in the difference of the power of the Spirit. The Americans would call their Christian music scene a sub-culture. I think that in England we've got the opportunity of it to genuinely become a counter-culture." Built on the right foundation, Christians should be able to bring real innovation to all areas of life, whether its art, music, media etc .etc.