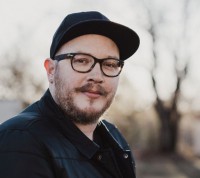 In the same way that you link classic modern worship songs like "Shout To The Lord" or "How Great Is Our God" with the names Darlene Zschech and Chris Tomlin, "Your Love Never Fails" is a song that since its creation in 2009 has become something of a worship music calling card for songsmith Chris McClarney. Now with his fine new album 'Breakthrough', produced by Jeremy Edwardson and Ian McIntosh and released on Jesus Culture, appearing on Christian radio playlists around the world Chris seems set for more success. He took time out from his busy schedule to speak to Cross Rhythms.

Tony: You were going to John Hartley's place to write songs and chill. Are you still doing that?

Chris: (Ha ha.) Yes, I've been to John Hartley's quite a bit and he's a buddy. I was over there couple weeks ago in Brighton (Nashville).

Tony: Tell me a little bit about the new album. Was it a long time in the making?

Chris: Yeah, this one took a little over a year of actively writing. I wrote about 50 songs and we whittled it down to 15. We recorded 12 songs and ended up with 10 on the final product. I'm a worship pastor at a church in Nashville so I'm in a community of people I see week after week. These songs are for them and the community, so being able to write songs for them feels good.

Tony: Were the majority of the songs performed in church before they were even recorded?

Tony: As Jesus Culture is based in Sacramento, are you regularly travelling to Sacramento from Nashville?

Chris: Yeah, I go to Sacramento a few times a year. We also tour quite a bit together. The drummer for Jesus Culture also lives in Nashville so we travel together and hook up with the rest of the band; for example in autumn we are going to play in 18 shows around the US. We get a lot of opportunities to spend time together and come up with ideas. We also went to South Africa for a couple of weeks which was amazing.

Tony: Of the songs on the album, which so far have been impacting people the most?

Chris: I've got a lot of messages about "Breakthrough" and people singing "Hallelujah For The Cross" at their churches, which is so humbling. Probably my favourite thing that I do is getting those emails and instant messages. I've even had a few phone calls.

Tony: Is there another worship classic on this album? "Love Never Fails" is acknowledged a classic, does it kind of haunt you?