Chris Mercer: The British singer/songwriter speaks about her album 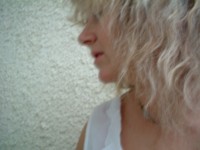 The release of 'Whispers Of His Grace' by Chris Mercer brings to an end one of the longest waits in UK Christian music. For it's been almost 20 years since the Merseyside-based singer/songwriter had a recording of her own in the marketplace. Back in the 1980s Chris was a popular figure on the British Christian music scene when as half of the husband-and-wife duo Chris & Garry she toured all over the UK and overseas as well. Chris & Garry released a couple of independent cassettes and a record, 'Ice Breaking', through Walsall-based Big Feet Media. It was at Big Feet that Chris first met up with singer/songwriter/multi-instrumentalist Sammy Horner, the man who produced 'Whispers Of His Grace'. Remembers Chris, "I loved Sammy's music from the moment I first heard it. He had a Celtic roots approach which really brought something fresh to the Christian arena. We kept in touch and later on I got to sing on a couple of Sammy's recording projects."

When Chris & Garry stopped touring, Chris continued to sing at conferences, services and concerts in between raising a family (Chris is today a mother of four). She ministered alongside such well known preachers as Steve Chalk, Tony Campolo and J John. She continued to write worship, contemporary and children's songs and in the late '90s worked extensively with Mission Aviation Fellowship. She then, along with husband Garry, became a worship pastor in a local church and worked with two other churches developing their music ministry. In fact, Garry, a gifted muso, has become quite a figure in behind-the-scenes musical activity, even being awarded a gold disc for the help he gave to the formative The Coral when the band began their hitmaking career.

For Chris her music ministry continued unabated until finally the opportunity to record her solo debut arose after a chance remark to Sammy Horner. "Sammy agreed to take the project on, we began to write songs and quite honestly, God was all over the whole thing. Having musicians like Jim Devlin, Paul Baird, Stuart Trotter, David Lyon, Tim Cotterell and Phil Madeira (the legendary Nashville session man and producer) playing on my record was such an honour. Plus Sammy and I worked very creatively together. The album kept the focus on God, not us."

Those nostalgists who remember Chris & Garry's bubbly synth-pop will be stunned by the expansive musical direction of 'Whispers Of His Grace'. Plaintive Celtic airs, retro rock-a-boogie and, most surprisingly of all, a country duet with Sammy Horner, all vie for attention on an eclectic roots selection. In fact, the latter song, "Jesus And You", has already become a turntable hit being picked up for play by numerous country and Christian radio stations.

Things are moving at a new pace for Chris. She has management in the USA (Tame Your Tongue Productions who will be releasing her album Stateside), has concerts due in places as far apart as Africa, USA and the UK and has recently formed a charity, The Whispers Foundation. All this fresh interest in this most gifted of singers is summed up simply by Chris, "Everything that's been happening recently has been done by the Lord. It's he who opens doors."

Its been too long lets get in touch.