Chud'e: The New Jersey-based rapper with the "Day And Night" radio hit

Tony Cummings spoke to rapper CHUD'E about his life, singles and the 'Chilltown' album 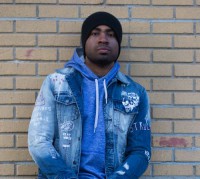 Regular xRhythms listeners will be enjoying the 2018-released single "Day And Night" by Jersey City Heights-based rapper Chud'e. So clearly it was time for a chat with the man. It turned out that he was born Paul Iwenofu and that his chosen rap name should be pronounced Chew-day. Having got those details sorted out I was soon talking to the emcee about his life and music.

Chud'e filled in his early background. "I was born in Brooklyn, New York. My parents are Nigerian. My father left home when I was 10. I was a bit of a rebel at school, mostly out of, I guess, hurt and not being able to process what I was feeling - not having a male figure that I could confide in. I started to lose friends due to my behaviour, even though I was popular before. Around that time I lost contact with my older half-brother (my only sibling; we reconnected later in 2009) and most of my friends moved out of town. It was a dark time early in life and I started to have depression and also gained weight. I started to contemplate suicide as well. My mother saw the trajectory that I was on and after I failed the 6th grade she decided to send me to stay with some family in Nigeria. The purpose was not only for me to appreciate my privileges in the US but also for me to understand my culture and perhaps grow as a person. It was around this time I came to develop a relationship with Jesus."

During his spell in Nigeria Chud'e met up again with his father. Much to his amazement his father, once a minor criminal, was now a pastor of a church, having been radically changed by God. The transformation had a profound impact on the troubled teenager.

Back in the US Chud'e knuckled down to his studies and went on to get a degree in criminal justice. However, he was running into some spiritual problems. "I did have a mis-step because I had overlooked the warning about not being unequally yoked and I had fallen for a woman that was not saved, who was very far from Christ. Thank God, it didn't lead to anything that I would still be regretting to this day. We didn't fornicate, or anything like that, but because I was trying to impress her, there were certain things that I still didn't know about the Christian way, I kinda became lukewarm. But the Lord helped me to grow and I had a good circle of friends that I was able to talk to and so on and so forth, and by the time I reached my senior year things had stabilised a lot and I was attending church regularly."

For a season Chud'e bounced from job to job. He explained, "It really built up my character. I learnt about faith, even more about trust. It's around the time prior to when I was hired by a law firm that I had some extra time to devote to the Lord. I don't regret that time period because I feel like the Lord really built me up during that time."

In 2017 he met some people at his church who were into Christian hip-hop. "I met three Christian rap artists by the name of Echo, AV and Jayzee Marty. I had no idea what Christian rap was, I didn't even know that was a thing. I just thought that maybe some people on the secular side might decide at that point to reference the Lord even if their lyrics didn't really match what they professed. When I met them and listened to their music it just lit a fire in me. I started listening to other Christian rappers like Lecrae and Bizzle; it was really just an amazing time."

By 2018 Chud'e was releasing a series of singles. He said, "The first one was 'Chilltown'. That was basically a collaboration with the guys from the team. The funny thing about that is when I released 'Chilltown' on iTunes I mistakenly made a duplicate. I'm not sure how that happened! So two came out. My next release was 'Too Late'. I had actually met a producer by the name of Picasso through AV and Echo, and once I met him we kind of instantly clicked. I recorded 98% of all my music at his studio. Recently I have bought a home studio which I intend to use, by God's grace, in the very near future. Just for the sake of time and flexibility and things like that. But pretty much all of my music was recorded at his studio."

The pattern followed by most hip-hop artists today is to go on releasing singles every month or two until one or two click. Chud'e admitted that he was surprised that his breakthrough occurred on British internet station xRhythms. "I was, and still am, grateful for the consideration and for my song being chosen. Sometimes, I guess, when it comes to music, it's kind of unpredictable to really determine how it might impact a person or who might actually listen to it. 'Day And Night' is a song about basically trusting in the Lord at all times. It's about having the right mindset for challenges in life and keeping Christ first in all circumstances. Whether perhaps it's going to work or facing adversity, just whatever the case may be, it's about moving forward with the right mindset as a Christian."

Chud'e full-length album debut 'Chilltown' was released on 31st December 2019. Featured on the project are Anodyne Virtue, Echo Guzman, Christina Rotondo and Melanie Williams. Speaking about the project the rapper said, "'Chilltown' in total is kinda like an autobiography. It's like a broad story and it's a story of redemption, faith, struggles, things like that. But I think that with every song on 'Chilltown', there'll be at least one song that most people will be able to relate to. It's definitely an album that a lot of people will, I pray, be able to draw strength from and it'll be an album that will point people to Christ as well."

Chud'e is now working for the city of New York as a Youth Development Specialist, working with at-risk youth and helping them out. I finished our chat by asking whether he had any plans for a full-time rap career. He responded, "Not yet, not yet. I just intend to see where God takes me within my career and within the whole experience. I do have a passion for the youth, I do want to be the person that I didn't have growing up, and whatever capacity that will be in, I know that it's up to the Lord and he will direct me in the right direction."