In a new series Cross Rhythms will be visiting cities across Britain to discover what exactly is happening on the Christian music scene. We begin our city-wide surveys with the West Country hot spot fast gaining a reputation as "Britain's Nashville", Bristol. Helen Knight and Tony Cummings report. 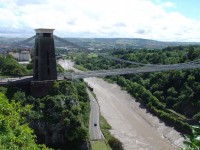 Bristol is the key to the South West, a vibrant and cosmopolitan city with a mix of distinctive cultural flavours. Take, for example the sheer range of annual festivals it hosts - The Balloon Fiesta; Ashton Court Festival; St Pauls Carnival; Harbour Festival and the Jazz Festival at the Old Duke. Add to this the diverse cityscape of established landmarks and modern developments with no shortage of recreational space, it is no surprise that the city is such a draw for students - 35,000 of them!

Bristol's music scene is well known for its eclecticism having inspired the likes of Roni Size, Reprazent and Massive Attack and similarly the Christian artists in the area are creating new sounds and breaking new ground across a spectrum of musical genres from breakbeat to gothic doom.

Spiritually, the city is eager for revival. With churches of every denomination and many I independent fellowships it can seem quite fragmented, yet the unity that is being expressed between the churches is inspiring a deeper fellowship. Events like The Mix which sees over 650 young people from over 50 churches cram into Woodlands Christian Centre every month to worship God and receive teaching is an encouraging sight to behold. Or take the club work Contagious, which is seeking to impact club culture through the planting of cells and bar nights, etc. The city is lifted in prayer 24 hours a day with The Prayer Wall interceding for those in positions of authority in the city, its schools and of course its churches.

It is the rise of two ministries particularly, NGM and Redland Studios, which have proven to be the focal point for the explosion of Christian music activity in Bristol and given it its tongue-in-cheek reputation as Britain's answer to Nashville. NGM, with the international impact it is making with artists like steve and NGM's mission and arts training complex Caedmon, has put Bristol well and truly in the national, and potentially international, spotlight while Redland Studios' tireless support of grassroots ministry has given recording opportunities to numerous artists. Here then is a survey of all that is happening in and around Bristol.

Artists
Ashen Mortality
Style: Gothic Doom
Line Up: Ian Arkey (lead vocals, guitar), Melanie Sarah Balton (keyboards, vocals), Tim Cooper(bass)
Facts: Originally from Birmingham, Ashen Mortality were formed after the near legendary thrash metal Seventh Angel, fronted by Ian Arkey, disbanded in 1993. Ashen Mortality are experienced performers to audiences both home and abroad. They have been on several UK tours as an individual group and with other bands of the same genre and in 1994 toured Holland and Germany. The band is currently on a break but hope to start gigging again around Christmas time. Their two albums, 'Sleepless Remorse' (1996) and 'Your Caress' (1998) were both recorded on their label Forsaken Records and distributed by PHD and a third is written and ready to be recorded. About Their Ministry: Ian: "We see our ministry more as individuals. We do music because that is who we are and it is not something separate for us, when we go out and play in clubs people know what we think because we are quite open about our beliefs. Bristol is really good - there's loads going on and a lot more people interested in the more unusual stuff as well, which is what we do."

Bushbaby
Style: Post Grunge Power Rock
Line Up: Ben James (lead vocals, guitar), Matt Sim (bass), Kev Bonett (drums) FACTS: Encouragingly this dynamic rock team are getting the attention they deserve after two years of difficulties. Their debut album 'Space Corps' has been released by London-based Organic Records and the band have been signed to a management company. 'Space Corps' was originally released in the USA by Massive Groove under the name Medicine' (with the song "Medicine" becoming a major turntable hit on Cross Rhythms radio). The origins of Bushbaby go back to the early 90s when brothers Ben and Andy Mears formed heavy metal band Gethsemane Rose who, though favourites on the Christian scene and producing classic albums like Tattered 'N' Torn' (1993) and 'Poetranium' (1996), never quite got the breakthrough their huge talent deserved. Now finally Bushbaby seems to be fulfilling the potential of Ben James' songwriting talents.
About Their Ministry: Matt: Bushbaby is a ministry where Jesus plays a large part. Because we've been called to play in the mainstream, we don't do altar calls or preach from stage. But we DO endeavour to be a witness for Christ in the mainstream."

Code F
Style: Drum 'n' Bass
Line Up: Felix McCabe (vocals, producer), Phill Kay (drums, producer), Paul Stanborough (guitar), Hannah Bristow (guest vocals), Olivia Bradbury (vocals), Sash Atkinson (keyboards, samples)
Facts: Bristol doctor Felix McCabe has long dabbled in Christian music. Original band Strange Blue World got close to landing a record contract then as Hyperdust cut an independent single which was featured on a past Cross Rhythms sampler. Changes in line up and sound led to the band being renamed Urban Militia and now with another new line up, a fresh moniker was needed. Code F is tapping into new and contemporary sounds, combining drum 'n' bass beats with melody and song. Currently putting the finishing touches on their 12-track album, and looking to showcase their music live, Code F's excitement for the future is tangible. Recent interest from certain recording labels (who shall remain confidential), television channels and venues both in Bristol and London indicate that Code F is a name to watch for...
About Their Ministry: Felix: "The vision is to get out there in the world and just be real for God. The ministry is just being a Christian out there with non-Christians because the danger is to stay and preach to the converted."

Doolan
Style: Rock/Pop
Line Up: Adam Maxwell (bass), Matt Doolan (drums), John Pike (lead guitar), Tim Crummack (harmonica, vocals), Paul Maxwell (lead vocals, acoustic guitar) Graeme Drege (percussion)
Facts: Originally a worship band called Mechunkandoolan, Doolan are now involved in schools work in the local area. Having released two independent albums, 'The Way We Make it' (1999) and 'Humble Pie' (2000), God has led them to build affirming relationships with the pupils in the area and even instructed them to give away over 1,000 copies of their latest album! Doolan have been together for four years and in September played a gig with Bottle roc kit to an audience of 700, half of whom they knew through their schools work!
About Their Ministry: Paul: "We want to paint a picture to raise the profile of God to show that it is actually cool to be a Christian Irather than people you push around in the [playground. The plan is to build up youth [groups so that they believe they can make a difference."

First Class
Style: Dance/Pop
Line Up: Julia Ravenscroft (coordinator, dancer, communicator), Tina Mann (dancer), Katie Thomason (singer, dancer), Laura Cheadle (singer, dancer), Joni Fleming (singer, dancer)
Facts: A new NGM band/team with a special ministry focused into Bristol's primary schools. The group have experience in taking assemblies, lessons and dance workshops in schools. First Class have also staged Popstars (training at NGM's Caedmon Complex.
About Their Ministry: Katie Reynolds (assistant training manager): "Our aim is as Christians to tell children about what we believe as Christians and how exciting it can be to have a friendship with God. We use singing, (dancing, stories and games to communicate this in a way that children can understand."

The Free Spirit Band
Style: Folk
Line Up: Graham Kay (guitar, vocals), Helen Bancroft (violin), Beryl Desmonds (flute), Catherine Illing (pennywhistle), Tim tiling (drums), John Bowyer (electric guitar, electric mandolin), Richard Davison (bass)
Facts: Playing to both mainstream and Christian audiences, the band have found themselves on two definite paths where the Saturday night gigs provide the finances for their predominantly Christian recordings. 'Christ Mass1 (1998) blends traditional folk music with ancient carols. 'Poached' (1999) saw a move toward straightforward folk music whilst their latest recording '2000 Years' (2000) is a collection of meditative pieces and ancient Celtic music. All three were recorded at Redland Studios and released independently. Work is due to start on their next project. About Their Ministry: Richard: "First and foremost we are a bunch of Christians, but we operate almost entirely as a secular folk band. What we are showing is that you can play something that is vital, original and creative but which stands for something."

Alan Gibson
Style: Worship Leader/Songwriter/Spanish Guitar
Background: Alan is the worship leader at Pip 'N' Jay's and has been writing music for the last 14 or 15 years.
Facts: His first album On Eagles Wings' was recorded at Redland Studios in 1998 and released independently. Alan is currently working on his second album on the theme of reconciliation, which will combine the voices of both Messianic and Arab believers. He also sings as a member of a six part acapella group which seeks to evangelise using a wide repertoire of Christian and secular songs.
About His Ministry: "I believe that worship can be used as part of outreach. Not just singing songs with a message but actually worshipping God can say something to people outside of the Church. With the acapella group I felt that there was a need for that sort of ministry musically, the need for more groups to attract a wider age group that I hope would include young people."

Phil Glover
Style: Blues/R&B
Background: Born in Bristol in 1963, Phil became a Christian at the age of eight. He currently attends the Lawrence Weston Christian Fellowship.
Facts: 1991 saw Nick Hodges team up with Phil as the producer on Phil's album 'Always'. With links to Andrew Yelland and WRM, Phil has supported their ministry and performed in In The Park, the forerunner to Day One. About His Ministry: I have seen my songwriting open up this year and I would like to concentrate on that. I am not saying that they will break into the charts, but I pray that they will touch people's lives. I have seen God do that and I am humbled by it and give him all the glory."

Geraldine Latty
Style: Worship Leader
Background: Born into a close West Indian family living in Crewe, Geraldine grew up in the Pentecostal Church. She works as a teacher at a secondary school in Bristol and leads worship at Cairns Road Baptist Church.
Facts: Through her anointed ministry at Ireland's FocusFest and the Spring Harvest weeks, Geraldine has become a much loved figure in worship ministry. After numerous live event recordings, Geraldine finally released her debut solo album 'Make Me A Channel Of Your Peace' for Kingsway in 2000.
About Her Ministry: "There are really three strands to my ministry. The main part is encouraging and teaching local church worship musicians all over Britain and abroad by holding workshops and seminars. The second strand is leading worship both at my local church, smaller events and sometimes the really large gatherings. The third strand is recording."

Mercy
Style: Praise/Urban/Latin
Line Up: Sam Hearle (keys), Andy White (bass), Paul Greaves (guitar), John Kirby (drums), Sue Bridgeman (percussion, backing vocals), Andrew Yelland (guitar, vocals)
Facts: The band expression of the WRM ministry founded by singer/worship leader Andrew Yelland, Mercy's album 'Do You Like What You See' was released independently in October, a collection of praise songs with urban and Latin grooves.
About Their Ministry: "Our tag line is To see people entering into an intimate relationship with God through a worshipping lifestyle.'"