Continuing our series where we visit cities across Britain to discover what is happening on the Christian music scene; Mike Rimmer went back to his place of birth to bring us this report on Newcastle-upon-Tyne.

Newcastle-upon-Tyne has a rich musical history, particularly since the birth of rock'n'roll. The Animals, Brian Ferry, Alan Price, Mark Knoefler, Prefab Sprout and, ahem, Ant & Dec all hail from these parts. The city has undergone a regeneration in the last decade with new music venues and a thriving club scene opening up to compete with the huge number of pubs in the city.

The Telewest Arena has given the city a large scale venue for the bigger bands to visit. St James Park, the home of Newcastle United, has in its time played host to the world's most successful acts and the famous 2000 seater City Hall has been a mainstay venue for the rock and pop fraternity to visit. The City Hall recently played host to The Tribe on their UK tour and each month Yfriday play there at YFC's IXth hour event.

However, even with all these venues, like many major cities the local music scene has a predominance of cover and tribute bands and bands playing their own material often struggle. As numerous Newcastle musicians told me, there are few opportunities to play and a great deal of frustration with the apathy of the Church community in the city towards music. One ministry that tried to promote Christian events in the North East area, Gospel Promotions, was at the time of my visit to Newcastle closed down because its founder Doug Foster was seriously ill. Sadly he has now passed away.

The Newcastle scene has clearly quite a way to go. However, one band emerging from a Youth For Christ event, Yfriday have risen to national prominence with their high octane rock praise. Also, a media ministry, God Digital, with their studios located in nearby Gateshead, is clearly a pivotal organisation in the expansion of Christian music ministry with their daily television exposure of Christian I music.

Here then is an A-Z guide of Christian music activity in and around the city of Newcastle.

All Saints Praise Band
Style: Contemporary Worship
Line Up: Bob Hooper (guitar), Beverley McKenzie (keyboards), Trish Bates (tenor sax), Peter Bailey (lead guitar), Joe Osman (bass), Stuart Affleck (drums), Jackie Flowers (vocals), Sue Hindmarch (vocals), Angela Marshall (vocals)
Background: Together since 1983, the band of the All Saints Church, Gateshead were originally formed to play alternative praise music in a special service at Newcastle Cathedral. Vicar Bob Hooper gathered musicians together for the event and they were then invited to play at other churches and have continued to play until the present day.
Facts: Still travelling and leading worship in churches in different parts of the country as well as locally. They play around 20 engagements a year and have released three albums, 'Let The Spirit Flow' (1985), 'Into The Darkness' (1989), 'All Saints Praise' (1998).
About Their Ministry: Bob Hooper: "We want to encourage people into the presence of God in worship and also encourage churches that have never used newer music into new music. There are still churches frightened of it but we go in and do it well and we have 20 years experience now."

George Collins
Style: Roots/Acoustic
Background: Formerly a radio presenter in Ireland, musical influences include country, folk and rock. He has written ballads, choruses, hymns, carols, worship songs, a lot of which are used in worship at his local church.
Facts: George started playing guitar in 1972 when he first got saved. He now has all his own equipment and has recorded one cassette which he gives away freely. George is a worship leader at Elim Pentecostal Church, Durham Road, Sunderland. Recently, George was approached by an independent producer who has offered to produce his next recording. Like the cassette, he plans to give this away also.
About His Ministry: "My ministry has blessed many and is steadily growing in stature. God has blessed me with a wonderful sensitivity to the Spirit and the ability to lead people to the throne of grace. There is nothing more that pleases me than to lead God's people in his praise and worship." 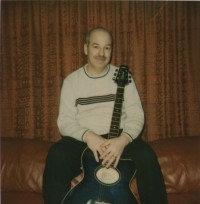 Dave Deeks
Style: Folk/Pop
Background: Dave Deeks has made music since the early '80s, fronting bands that concentrated on music ministry. His testimony includes being healed after he was struck down by a rare condition called Guillain-Barr Syndrome. Within a week of its onset, his whole body was almost completely paralysed. After the fervent prayers of family and friends however the reversal of the illness was followed by a rate and extent of recovery that far exceeded medical expectations - to the point where Dave now has only minor evidence of his paralysis.
Facts: Working with producer Bob Cranham, Dave has released three CDs, let Go, Let God' (1985), 'Solid Rock1 (1990) and 'Walk With The One' (1999). He is currently writing a handful of songs each year but most of his time is dedicated to his day job, lecturing in computing at Sunderland University.
About His Ministry: "Regular contributions to services at Dunston Family Church. Nothing else live since the launch gig for 'Walk With The One' on October 1999.

Dependance
Style: Pop/R&B/Hip Hop
LINE UP Stephen Riley (singer/director for Dependance), Susan Bennett (Arts Coordinator for YFC North-East), Nathan Jarvis (rapper/breakdancer), Kyra Mclntyre (singer/actress/dancer), Laura Coulson (actress/dancer), Joanne Oliver (actress/dancer)
Background: The band have been together full time for just over a year. They used to operate as a year out scheme set up by Tyneside YFC in partnership with YFC nationally. Dependance went full time so that they could set down a vision and aims for the work that they do and have an ongoing team to aid in this.
Facts: The band have released two CDs. 'BrotherSister' came out in 2000 followed by '139' in 2001. Currently the band are strongly involved in schools missions and trying to get a website up and running which they intend to be very simple and resourceful for young people.
About Their Ministry: Stephen Riley: "On the ministry side, we're busy with schools missions, trying to sharpen what we do. Were seeing an amazing response to the Gospel through the work that we do - more so than we have ever seen before; it's exciting!"

Christine Deponio
Style: Ballad/Easy Listening
Background: In 1988 Christine was miraculously healed from a serious illness and God used music in the healing process. Consequently Christine began writing her own music, performing her songs and sharing her testimony with encouraging results. God opened the door for ministry in churches, Mothers Union meetings, women's fellowships and other places.
Facts: Christine released a cassette 'Love Is A Gift' in 1990 and has done quite a lot of work in prisons. More recently she has trained as a therapist and worked to ease the physical condition of terminally ill patients.
About Her Ministry: "I believe that God wants me to move back into music. I want to record a Mission Praise style worship album. My goal is to raise money so that I can open a therapy centre."

Gilian Gartry
Style: Mainly contemporary
Background: Singing since childhood, Gilian started singing around the North East with Bethany choir as a teenager. Using backing tracks and a small PA, she performed solo concerts but spent most of the '80s singing with the British Continentals throughout the UK with evangelist Eric Delve.
Facts: In 1982 Gilian recorded an independent album, 'Jesus Put A Song In My Heart' followed by 'In His Hands' (1985) before recording 'With You' for Word Records in 1989. This year she is releasing 'Flying The Skies' which is an independent release with Andy Silver.
About Her Ministry:Gilian is a single parent involved with CLASP, Christian Link Association for Lone Parents, which is part of Care For the Family, and continues to do ministry concerts as part of that. She also leads worship at her church, Bethany Christian Centre and works full time at GOD Digital on the Partner Care lines.

Andy Gawn
Style: Children's
Background: Andy is a primary school teacher with the desire to communicate truth to primary school age children in a way that is contemporary and fun. He's been involved in children's evangelism since the early '90s and from there began to write his own children's songs.
Facts: Andy mainly performs in his own school in assemblies and has recently started doing some things in other schools. As a member of a large Parish church, there are plenty of opportunities for children's music and ministry. His CD releases are 'You And Me We're Lights' (1995), 'Come On A Journey' (1997) and 'Be Be Belong'(2000).
About His Ministry: "A lot of churches find children's evangelism difficult and often struggle with making children's music contemporary so stick with old fashioned songs. To be able to have a lot of fun with music and communicate biblical truth is a real privilege. Primary school children respond well."

Gideon's Answer
Style Roots/Pop/Rock
Line Up: Paul Sidey (bass), Neal Croudace (guitar/vocals), Colleen Fraser (vocals), Audrey Samuels (vocals)
Background: Most of Gideon's Answer played in a variety of local groups, sang in clubs or played in church worship bands prior to joining the band. The name Gideon's Answer comes from the fact that Gideon found it incredible that God had a task for him to do. As individuals they feel the same.
Facts: The band released their cassette/CD There's A Joy In My Heart' in 2000. They are currently in the studio recording their second CD 'Keep Your Lamp Burning'.
About Their Ministry: Neal Croudace, "We have played at all sorts of Christian events from fellowship groups to breakfasts with speakers as well as at Pentecost 2000 at Gateshead Stadium. We mostly play in churches where we tend to take an entire service. We start and close with well known praise songs with our own material and testimony in the middle."