Mike Rimmer chewed the fat with CLARKESVILLE, the mainstream singer/songwriter who transformed into a band. 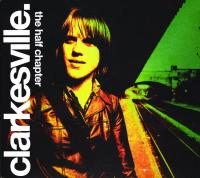 Clarkesville, are playing to a partisan crowd at Birmingham's Bar Academy. It's a November night and opening acts Vender and Audiogene have done their stuff, the latter evidently bringing their own crowd with them for a set that demonstrates how much Michael and the band have grown. And now the room belongs to Clarkesville as family, friends and fans gather to celebrate the release of 'The Half Chapter' and the single "Heavy Soul". Clarkesville haven't yet managed to dent the top 75 with their singles and yet there's a buzz about their music that promises greater things. Critical reaction to Clarkesville's debut album has been strong and when they finally break into the intro of "Secret File", the band's best known song, there are cheers of recognition from the crowd.

Earlier in the afternoon I watched as Michael with his brother Steve on bass, Andy Nixon on drums and Nikolaj Juel on guitar sound checked in the dark venue. As Michael picked out the chords to "Someday" and the band picked up the song, I reflected that at the moment it's support slots for Clarkesville with acts like Sheryl Crowe and John Mayer and then smaller headline gigs of his own. But if Clarkesville makes it huge, how many people will dine out on the fact they saw him here?

Sound check over, Michael and Steve grab a seat and we chat. So is this a band or a solo act with a band name? I turn my attention to Michael, "Let's talk about ME!" he laughs. "I guess it started just me with the guitar and sort of built up around that but it's steadily turning into something else with other people in the band more involved. For the time being it is more of a band."

Bassist Steve has already had a taste of pop success with his band the Dum Dums who released one album and achieved a whirlwind of four top 40 hit singles before disbanding. Did seeing his brother succeed encourage Michael that it was possible to make it? "Steve and I were in bands as we were growing up so I guess we both had that ambition from quite a young age. Seeing Steve do it was a big confidence boost so I realised it's not as impossible to get into this as you're led to believe."

The brothers' first taste of making music together was when they lived in Amsterdam as kids. Their parents ran a drug rehab centre over there and Michael remembers, "Everything's more rock'n'roll over there so that was great for me, getting into electric guitars and stuff.perfect! I think particularly for an eight year old to be living in the environment that we were, with my mum and dad running a drug rehabilitation/drop-in centre, it was quite interesting to see that at that age. I think in Amsterdam, you come into contact with so many different cultures and ways of life that it's bound to open up your thinking to lots of different things."

When it comes to the marriage of his faith with his music, Michael is comfortable working in the mainstream scene. "I don't really feel any pressure to be honest." He expands, "No one has a problem with a lawyer going to a secular lawyer's office and doing his job and sometimes I just think Christian musicians can feel an enormous amount of pressure, to have to be vocal about it all the time. I think personally, it's more of a lifestyle thing. I'm still trying to figure out how to live my life right and as long as I'm concentrating on doing that, then I think I'm walking the right path. We're exposed to a lot of stuff but I can't tell anybody else how to live their lives, I can just do the best that I can do. It's my choice not to get involved and that's all it boils down to really. I think that people notice your choices and there are certain things that you're not going to do. I think maybe that has an effect along the way."

He continues, "Let me put it this way, people that I've developed relationships with, I feel much more comfortable talking to about my faith. So I've had lots of conversations with my producer who I practically lived with for a couple of months when recording the album. I feel much more comfortable doing it once that relationship is there. I think it's about respect as well. I have to respect other people's ways of life. I don't necessarily agree with them but I've got to respect it."

It's taken a while for Michael to get a steady line up of Clarkesville settled. After much trouble finding a bass guitarist who fitted the bill he recruited his brother. Steve comments, "He couldn't find anyone as good as me." The both dissolve into laughter. Michael confesses. "Drums are even worse! We've had SO many drummers it's crazy!" Now with the addition of Andy Nixon, the line up has at last settled. Packed onto the small stage, the band gel together behind Michael as he leads the way either sitting at the piano or standing playing guitar. The organic feel of the album comes alive in this setting and takes on a new life with the energy each musician breathes into the material.

The overall feel of 'The Half Chapter' is quite downbeat. Is it that Michael has a downbeat personality? "I think there's an element of that." He explains, "At times I've really struggled to keep myself happy and I guess I don't want to pretend anything so these songs are real reflections of what I've felt at times." I wonder out loud how that balances up with a life of faith as a Christian? People coming to this who find out Michael is a Christian might expect something that's got more happy moments in it! He answers thoughtfully, "Well, Christians are still people and we're all going through different things. Some people are affected by certain things in different ways and more or less than others. For me, I can't pretend that just because I'm a Christian that all my problems have gone. In fact in a lot of ways, it's harder to be a Christian! At the end of the day I am a person of faith but for me, there's certain difficulties that don't go away. I'm still trying to battle on and trying to live through it. Maybe some think that the issues should all go away but that's not my experience."

There are some hopeful moments on the album! For an encore at Bar Academy, Michael returns alone with an acoustic guitar and sings "Reprise" and dedicates it to Darren, a mate in the crowd. Judging from his response, it's obviously his favourite song! Another happy punter and yet I can see why. The song actually has the lilting melody of a gentle worship song and I feel a warm glow listening to it.

Earlier in the evening I had been struck by the optimism of "Some Day". Michael admits, "It is probably THE most hopeful song I've ever written, probably alongside "Everyone Will Have Their Day". That's quite unusual for me because I have a tendency to be quite.depressive! I go into my shell. For me to write a song that hopeful; I surprised myself I think!" he laughs. "But I think it's important. I wanted there to be an element of hope on the album. There are lots of different themes. I remember chatting to my dad as I was growing up and learning to write and I remember him saying to me, 'You can't just sing about the problems because that's poking a wound. People are really going through that stuff.' I think I really took that on board and 'Some Day' and 'Everyone Will Have Their Day' are the result of that. I wrote that as I was seeing what Steve was going through with his split up with the Dum Dums. Obviously it was a really tough time and he really hit rock-bottom around then. My girlfriend at the time was also having to do a really rubbish job as part of her University course! I was just thinking, 'You know, these days are going to be over soon. You're going to be on to new things. Let's look up and look to the future!'"

And so will the future see the Clarke family once again celebrating chart success? At the time of going to press, Michael is working away in his home studio recording demos of new material. Meanwhile the band are releasing "Spinning" as their new single. Could this mark a breakthrough? Let's hope so!

At the end of the gig, Michael is standing by the bar as people begin to leave the venue and head into the cold night. He is surrounded by well wishers, old friends and family members. And what do the rest of the Clarke clan make of it all? "They've been completely supportive all the way," Michael admits. "Obviously it's weird for them, it's weird for us, it's weird for everyone that knows us I think! All of a sudden to see us in magazines and hear us on the radio and stuff. So it's strange for all of them but they've been full-on supportive all the way and they've had practice supporting the Dum Dums!" He laughs, "Now it's just Round 2!"