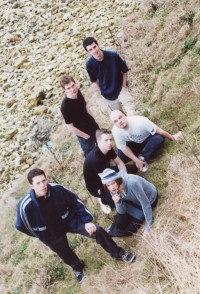 Mike: What sort of name is Coastal Dune?

Andy: Three beautiful years ago, six youthful British tourists parted their present company and arrived in the sand-blown coastal formations of Northern California. Some might call it chance, others accident, but when these weary travellers met atop a coastal dune and formulated the community of musical relationships that would go on to change the world they lived in, there was to be only one contender for the identity of this popular beat combo.

Mike: Every band member graduated from university last summer. With all the Coastal Dune activities, did you all manage to get decent degrees?

Andy: Everyone did except Ste D, our bassist. Ste was not so much hindered by the life of pop stardom, more his general academic incompetence.

Mike: Has it been exciting recording your debut album?

Andy: The freedom to work full time on the project and retain complete control over the artistic direction of the album has been invaluable. We're extremely pleased with what we've come up with and are already looking forward to the next one.

Mike: What memories stand out?

Andy: There were plenty of great moments of creativity particularly from the guitar boys, while the birthing and performance of the orchestral parts on some of the tracks was spine-tingling. The realisation that as an independent band of students we could come up with music to rival the best of what's going on out there in the professional world was both encouraging and inspiring.

Mike: What's the vision of the band? What are you wanting to do?

Andy: We're recognising an ability to be used in both the Christian and mainstream scenes and we re seeking to have as big an impact as possible in both Our direction is continually being shaped by what's going on around us, as we've learnt that today only makes sense in the light of yesterday. All we can do is give everything we have in every place we go to every person we can.

Mike: You set yourself a year from graduation to get something going. Are you all going to get straight jobs in the summer or are you throwing your all into the band?

Andy: So far we're massively encouraged by what's happened this year in terms of the venues we've played and the people we met along the way. So there's no reason to be anything but positive at this stage and we're really excited about how this new album is going to push us along a little more. The future would seem at least bright. And some of us probably wouldn't be able to get a proper job in any case.

Mike: Pick two songs from the album that are very special and tell me why they are significant.

Andy: There are two songs on 'BlueGreen' that really help to sum up what we're trying to do as a group of people. 'Something In The Sound' is about as passionate as you can get in shouting to a generation largely ignorant of your God, that there is something more out there. While we've perhaps never given all the answers in our songs, we always aim to at least ask the questions. There is something deeper about the music compared to what Joe Public hears 99% of the time. That's not solely about an emotive performance, though such conviction communicates as well as anything today, but about a love for our culture and a desire to shout as well as whisper the message across. 'Contagious' is a personable song and one the real high energy songs on the album. It's about letting yourself go and hoping that the audience sees something different A key concept to us in our live set is to simply desire. That's not another empty cliche, but a summary of who we are. It's not to say that people necessarily become Christians because of our performances, but that we hope that they are inspired to want something of what we're presenting That's the contagious idea - in both the huge choruses and the more conversational verses. The tag line of the chorus and the: get the feeling that he's liking what I'm seeing,' expresses a sense of affirmation of what we're doing, It's a lot of fun out there too.