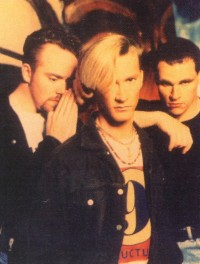 Unless you're a regular habituee of that little bit of record heaven called Dual Edge or the regular rave praise extravaganzas known as Last Daze, Code Of Ethics will be a new name to you. Stateside though this trio from Liberty University, Detroit, Michigan have been Christian music heroes, at least on the fanzine-driven underground scene, with an album for REX records and a reputation for pioneering Christian techno/industrial dance. Now personnel changes, a switch of record labels, and a more commercial direction sees the trio making a serious pitch for national and international attention. But despite the new commercial emphasis the approach of leader Barry Blaze's lyric writing remains pretty much the same.

"Everything I write lyrically is with a spiritual emphasis, but at the same time not so abrasive because the whole dance scene I came out of was real turned off by it," said Barry. "They thought it was offensive, a little corny and straight to the point. The kind of music we're influenced by lends your ear to deeper lyrics and thoughts. We want to take those thoughtful sides of music and make them accessible without being cheesy. A lot of kids these days want lyrics that are deeper, and I try to do that."

It is reasoning like this that is demonstrated in their second album, their first for ForeFront, 'Code Of Ethics'. "We and others our age are (part of) a new breed of Christian musicians coming in and feeding o u r generation what they're asking for. We are trying to change the sound of the music and the accessibility of it. The whole dance craze is not completely accepted, so we don't want to be too off the wall."

Such sensitivity to the cultural inhibitions and bad theology that exist in a Church which has all kinds of "problems with their bodies" is a wise move. One thing Code Of Ethics are keen to emphasise is that, unlike a lot of computer-derived album artists, they are a real, live gigging band. Live performances are their first love. "That's where we probably have the most fun. Our show is real energetic now, it's almost nonstop. The new show is much more visual and danceable. But actually, what is most important is being with people after the concert one on one and seeing where people are spiritually." The band, Barry Blaze, Scot Kifer and Rick Brainer, don't preach from the stage however. "I really believe the music does the speaking. I wasn't so sure before we started playing out. But once we started playing, people would come up afterwards and tell us how much a song spoke to them. I really do believe, now more than ever, that the music is where the Holy Spirit really speaks."

Code Of Ethics are keen to present a faith based in reality. Says Blaze, "We're not posing as people who have everything together, yet we are secure in knowing who we are in God's eyes."