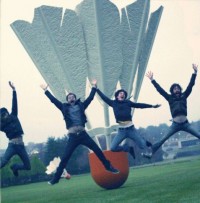 Mike: Who is in the band?

Mike: Where does the name Cool Hand Luke come from?

Jason: It's the name of a Paul Newman movie that we stole it from! Me and Brandon had a friend that just said that name and we didn't know it was a movie, we just thought it was a cool name and we wanted to start a band so we decided that would be our name! Shortly after, we hooked up with Mark and he didn't really like it OR hate it, so we just kept it. We liked the movie, there's no really cool story behind it. Any spiritual connotations? No. I mean we could make up some good ones but they wouldn't be true!
(Mark) I've seen a few websites that make some Christian parallels with the characters in the movie and stuff, which is pretty interesting.but we didn't know that beforehand! Obviously we're not this huge band, and people are like, "Yeah you're in a band.what are you called?" and we're like "Cool Hand Luke" and they say, "Oh yeah, I've heard of you guys!" I'm like "No you haven't, you've heard of the movie!". But we just keep that to ourselves!

Mike: Why did you call the album 'Wake Up O Sleeper'?

Jason: The phrase comes from Ephesians 5:14. I've read a little bit of history on it and they think Paul was quoting a hymn of that time, but no one really knows for sure. After we named it 'Wake Up O Sleeper' we realised that my study Bible is an NIV Bible and other translations don't say "Wake up O sleeper," they say other things! But that was where it came from and the Scripture says "Wake up O sleeper, rise from the dead and Christ will shine on you." I've heard people crack jokes about it, not mean jokes or anything but when we played our CD release show, there was like an MC and he said [adopts goofy southern drawl] "WAKE UP O SLEEPERS. YOUR BAND IS HERE!" and we were like "What?!?"

Mike: How does the title of the album fit with what the band are trying to do?

Mark: I just thought it fit the theme of the record really well because it's a call to Christians to wake up to what true worship is. It's a call for people who don't know Jesus to taste and see that he is good. We just feel called to worship and to glorify Christ. I know that's what we're supposed to say but I really feel like that's why we're a band and that is our goal.