Creation Fest '09: 10 punters & contributors offer snapshots of some of the festival events

A down-to-earth young rapper from Enfield, now living in and proudly 'repping' South East London, delivered a full-on blast of gospel truth. E Tizz's slow deliberate delivery chronicled a journey from a riotous youth, to lessons learned thus far into his faith journey. Using a generous peppering of quirky metaphors, catchy choruses and solid as granite hip-hop beats he exhorted his listeners to stop and engage with God in today's fast moving culture. His onstage antics were a nod in the direction of Jay-Z. Newly married and clearly lovin' it E Tizz was joined onstage by his wife to sing some backing vocals. A good set.

IAN HOMER, photographer
I've been around the skate park for the last few Creation Fests and for a photographer it proves to be superb source of great pictures with all the high drama these guys create. If the sun shines and it stays dry, as it did this year for at least some of the days, then it proves to be a winning formula. Spreading the event over a full week certainly did help too. From skate to BMX, demos and teaching to competitions, it is one exciting arena.

It seems that every pro-skater has his speciality. Zac Archulleta was no exception. I've seen many thrilling feats of flying and trickery atop a board with four small wheels attached and come close to getting well and truly clobbered, but Zac's attempts to Ollie 9 people and then jump a stack of six boards have to rank as way up there in the higher echelons. This man can fly and he did succeed, but I only wished he wasn't quite so close to me and my lens on the occasions when it all went wrong. But for all his status as a skate star, Zac is a humble believer and zealous communicator of Gospel truth. In fact, he is very well grounded and rooted in his faith and really communicates as well as he skates and many were the young skaters drinking in what he said.

Thebandwithnoname were just the breath of fresh and funky air the crowd of Creation Fest 2009 needed. Their overflowing energy and passion for Christ got the whole audience pumped up within seconds. The audience were bouncing and dancing in unison, even those older ones sitting at the sidelines were nodding their heads and tapping their feet in time with the throbbing beats of the band. Thebandwithnoname delivered extremely varied song styles for every type of modern music connoisseur. Equipped with top notch vocals (whether rapping at impressive speeds or going for the long emotional snippets), an awesome drummer, a brilliant guitarist and a fantastic DJ (who also does superspeed rapping), this band ticks all the boxes for anyone who likes to dance, sway or mosh, all in the same song. The whole band dressed in slick black and white gave us the satisfaction of feeling we were in good, fashion co-ordinated hands. Impressive stage presence and genuine emotion when performing were obvious from the get go, which meant the audience were loving every minute of it, even when we were sprayed with water. More than once. A performance that had an amazing spiritual impact.

This year was the first time that Superhero have been at the festival for just a matter of hours! It's been a stupidly busy summer for us and as a consequence we did not get to hang out with our Creation Fest friends this year. We have played at this event many times and really, for us now, we feel that we are just part of the family! I love this festival and love the people who make it happen. We play at a lot of festivals, both in the UK and overseas, and there are just a few that have that pioneering spirit and feel to them, where you just know that the festival happens for all the right reasons, reaching the lost, worshiping God, bringing good teaching and having loads of fun. Oh, and it's great for surfing, late night sea swimming or chilling by the ocean in whatever way you think best. We have travelled across America a lot over the last three years and visited a good number of Calvary Chapel fellowships, from California to New England! This festival sums up what I have seen everywhere we have encountered that particular family - that is, a passion for the lost, a desire to worship, big hearted hospitality and love. Simple faith lived out for all to see. This year, at the festival, my lasting memory has to be playing on the opening night and having Phil Pechonis preach the Gospel in the middle of the set and see 20 or 30 people responding to the appeal and accepting Christ for the first time! Amazing, we only ever see this stuff at Creation Fest. 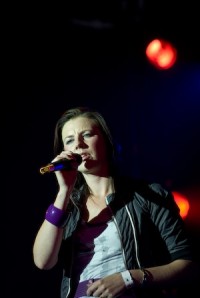 It was my first time at Creation Fest. I had the privilege of performing there and also giving a seminar on my life story so far. On the afternoon of my seminar I walked into the white marquee, down the muddy centre aisle and got ready to do some serious talking. As I started to speak I noticed a girl sat on the front row. She sat there with her arms wrapped around her stomach looking pale and dormant. At a guess she was a similar age to me but her hollow eyes told a hundred stories and it was obvious that she had lived a tough life. I continued with my seminar but half way through, my nose began to bleed. Now, I'm not the sort of person to over spiritualise things but whenever Satan is attempting to get at me, I quite often have a nosebleed. Don't ask me why! It just seems to be a pattern I've noticed in my life. I gathered myself together and carried on with my story.

At the end of the seminar there were a number of people who had related to what I'd been talking about and wanted to speak to me. The girl whom I'd noticed waited until the very end and then began to walk over to me. "Can I talk to you?" she asked. "I know that you've got something for me." I was a little freaked out by her comment but nevertheless sat down with her and asked her what she wanted to talk to me about. She said that she was feeling as if there was something stopping her from going deeper with God. So I asked if I could pray for her and I put my hand on her shoulder.

As soon as I put my hand on her shoulder and closed my eyes God gave me a picture of a heart with a human hand reaching into it. I was stunned. You see, eight years ago a lady told me that she believed God was going to use me to be a spiritual heart surgeon and that God was going to give me the ability to reach into the depths of people's hearts and put right what was wrong. God certainly had grabbed my attention! I said, "God, show me what you want me to pray for this girl."

Immediately God gave me two more pictures. The first was a picture of wedding rings. I felt led to pray about broken relationships that this girl had encountered in the past and had a real sense that God wanted to restore her trust. The second picture was of a witch's cauldron. I was taken aback by this at first and didn't know what to do. I really sensed that God wanted me to ask this girl whether or not she was into witchcraft and the occult. . . but what if I was wrong? She could be really offended if I started asking her about things like that. I had a little argument with God in my head and decided I couldn't ask her that question. But then I thought. . . who am I to get in the way of what God wants to do in this girl's life? I need to ask her. So I did. I opened my eyes and said, "I know this might sound really random and I'm sorry if I'm totally wrong but are you involved with anything to do with the occult?" Her face seemed to go even paler than it was already.

She began to tell me that she used to do Ouija boards when she was younger and dabbled in different areas of the occult. She also told me that she was living with a guy who was into tarot cards and her house contained all sorts of occult paraphernalia. I knew that God was in our conversation and told her to get rid of all of that stuff and ask her church leader to pray for her and her house.

Our time came to an end and she stood up to leave and I noticed that some of the colour had come back into her face and she wasn't hunched over any more. She walked a third of the way down the centre aisle and then turned around and said to me, "I don't know how you knew about all of that stuff and about my broken relationships but it was spot on." Then she carried on down the muddy walk way and out of the marquee.

I was amazed by the power of God at work. I really sensed that God was showing me that when he says something will happen it happens and none of his promises go unfulfilled. The Lord filled me with the faith to believe that anything is possible and that was the beginning of a whole new adventure for me. Since then, God has opened my eyes up to a whole new realm of ministry and I am seeing incredible things happen. After all, "No eye has seen, no ear has heard, and no mind has imagined what God has prepared or those who love him." 1 Corinthians 2:9

Any chance of this being an annual event??

Can somebody help me locate Leo Pswarayi

Does anybody know how I could contact Phil Pechonis!

wish I had been there....looks awesome!