On 9th, 10th and 11th July, 1993 3,000 people gathered for a weekend of music, arts and God for Holy Power, the third Cross Rhythms festival. 25 of them were subsequently asked to select a highlight of that extraordinary weekend in Okehampton, Devon. Organisers and school kids, youth workers and housewives, accountants and musicians say in their own words what it was that, for them, made Cross Rhythms '93 special. Ian Bosworth took the pictures.

THE VISION
I am certain that the heart of the gospel is relational. Relationship with God and thus with each other. Confirmation of this is found in Christ Jesus' exhortation that the first commandment is to love the Lord our God with all our heart, soul, mind and strength and the second is like it, to love our neighbour AS OURSELVES. If Christians were broken into this 'revelation' of LOVING OURSELVES through real repentance built on allowing God access into the very core of our beings, then our ability to live out the Christian life would be such that people would flock to the church. We cannot fake the REAL good news of the gospel. This process certainly happened during the ministry of Tony Fitzgerald on the Sunday morning when well over 700 people simply 'broke' into the loving arms of the Lord through the 'liberation of tears'. Tony's natural, unreligious and yet powerful expose of our lives' counterfeit idols, insured that Cross Rhythms 1993 was a place where God's Holy Spirit ministered to the deepest needs of the festival goer.

Cross Rhythms '93, Holy Power, was also a confirmation to me that God is deeply committed to seeing this 'liberating experience and principle' established in the lives of Christians. In fact, just over a year ago after Cross Rhythms '92, Holy Fire, God impressed on me deeply this concept for the festival - the power of God's Holy Spirit creating the attitudes and character of Jesus Christ in his believers. I genuinely believe that Cross Rhythms '94, Touching Glory, will be the greatest manifestation of God seen at any of Britain's festivals. I personally think the double rainbow seen over Mainstage at the weekend is a real confirmation of this hope and expectation. I'll see you there.
Chris Cole - Plymouth

RICK ELIAS
One of the highlights for me was seeing Rick Elias and his band The Confessions, who'd only just flown in from the States, on Mainstage. The rain was pouring down sufficiently hard in fact for Rick to quip, as he launched into a torrid electric guitar solo, "Don't shock me Lord." I will always remember his absolute honesty as he spoke of blue-collar crime, his own struggles and doubts and his deliverance. His music, including an astonishing version of Dylan's "Pressing On" was wonderful. Hundreds of us danced in the rain, with or without umbrellas.
Elaine Taylor - London

JULIA BRADLEY
Amazingly, the act that really stood out for me (an indie mosh head) was Julia Bradley. Julia's honesty and openness in her' lyrics really stopped me in my tracks and made me think about the 'front' i put up in my own life. Adie - Gloucester 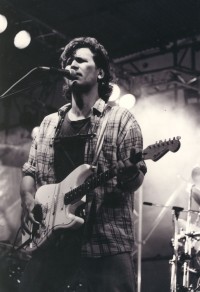 A RAINBOW
Rain again! The third fest and the third year where rain made an unwelcome appearance. I could have wept as we arrived with the unwelcome visitor sheeting across the site. But there was no time for weeping. A seminar, compering the Big Top, a niggling job of organising some display boards for an artwork display and the spasmodic bouts of rain made me feel a tad heavy while all around mackintoshed campers were enthusing that this was shaping up to be the best Cross Rhythms yet. I was particularly niggled that we had so little artwork on display in the Performing Arts Tent. Then, after one bout of rain, as I trudged across the squelching grass I suddenly heard the Lord speak. It was a simple message. "Look up," the Lord said. I did and I stood dumbfounded at what met my eyes. There above me was the most beautiful rainbow I had ever seen, arcing spectacularly from horizon to horizon. In one loving majestic display of God's artwork all my gloom and uncertainties vanished. This was indeed going to be a special Cross Rhythms.
Tony Cummings - Tavistock

KEVIN PROSCH
God's power poured through Kevin) Prosch... I felt a huge excitement inside and couldn't stop smiling... As the music j slowed down God spoke very clearly to me as I stood before him in his throne room. The Lord revealed some things to me about my life and relationship to him. I felt, and still feel, an amazing peacefulness. I have a desire to know him better and to carry out his work.
Alison Gentry - Devon

REV CHARLES BUCKMAN
|"Yo'oooooooooooh, Yo'oooooooooooh. Say Je'eeeeeeeeeee-sus, Je'eeeeeeeeee-sus!!" The Rev Charles Buckman, organiser of black gospel's GosFest, Chairman of DMi Awards and the pastor of a fast growing inner city London church stepped onto the Mainstage in between bands to encourage, exhort and stir up the CR throng. His message of unity within the Church could not have been stronger if he had gone into the crowd and Selotaped people together. There is no such thing as a Black church or a White church in God's eyes and Pastor Buckman's vision of a unified cultural church was as sincere as the joy he shared. The entire Mainstage crowd was jumping for joy shouting "Yo'oooooooooooh, Je'eeeeeeeeee-sus!!" Gavin Drake - Tavistock

CHILDREN'S WORK
My children had a lovely time at Cross Rhythms. Miriam, who's three, went in the creche. It was very well organised, plenty of helpers, and there was a lovely atmosphere. I felt confident to leave her. Then I took the boys over to the Green Tent. There Lorna Coulson gave the boys, and a tentfull of other children, a fine old time. The boys were soon acting out the Narnia Chronicles and singing lots of songs. They loved it.
Heather Richardson - Tavistock

EDEN BURNING
For their concert in the Big Top Eden Burning had them packed in like sardines. The heat was ferocious and so was the rhythm. Paul, Charlotte, Nive and friends played incredible, joyful folk rock, the crowd went crazy and for me and hundreds more the acoustic revolution was hitting Devon with a vengeance.
Terry Mills - West Midlands

GODFREY RUST
One of the highlights was Godfrey Rust's poetry at the marvellous Shattock And Rust In God We Trust Arty Party event. Godfrey has dry, dry humour, powerful in that as well as making us laugh, often at ourselves, he also brings us face to face with many serious issues of life. As a dancer I enjoy choreographing to the spoken word. I was delighted to find in Godfrey's poetry many possibilities for future work. I particularly enjoyed the title poem of his book 'Breaking The Chains'.
Vivienne Tsouris - Cornwall

NUFFSED
The highlight for Sunday for us was when Nuffsed sang "Fields Keep Calling". We are waiting with baited breath for this to be released.
Paul and Jayne Keitch - Bath 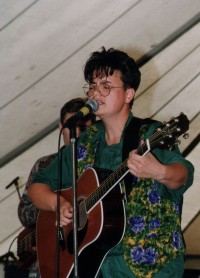 PITY THE SMALL THUMBS
Every once in a while the river runs out to sea and God drops a brick in the proverbial muddy waste that's left. And so it was, flat in the middle of the Pity The Small Thumbs set. Unfortunately can't remember the song, I can't even remember why I liked it. But it was real and kind of hallelujah-ey and in the hectic mish mash of a Cross Rhythms fest it just blessed my socks off.
Jonathan Bellamy - Plymouth

THE SUNDAY SERVICE
The presence of God was tangible at the festival, especially on the Sunday in a way that we haven't experienced at any similar event. It was a real pleasure to be involved; we were honoured to be so.
Scott and Aileen Patterson -Motherwell