Crossfya: The urban gospel evangelists with the "You Are My" radio hit 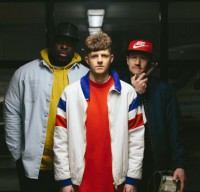 Crossfya are urban music evangelists who recently were all over the Cross Rhythms airwaves with their pulsating track "You Are My". Consisting of rappers Tim Cooke and Josh Mellor and vocalist Nana Ntiamoah, they are supported by Oldham-based charity Make Jesus Known. Tim and Josh live in Manchester and Nana in London. Last year they released a single "Faith Gang". Tim explained what the track is all about. "The Faith Gang is the name for our movement of young people sold out for Jesus. Whenever we do concerts we want to have a long term impact and our aim is to launch a Faith Gang group at each gig. This involves a six-week cutting edge multimedia course, utilising our iTruth app. The course acts as a bridge to link the young people into local church."

Tim continued, "In terms of the band I guess we are always pushing hard to reach out and connect with as many young people as we can. God has been challenging us to make disciples not just raised hands at our gigs. That is why our new Faith Gang initiative is so important to us. We are planning to launch 10 new groups in 2018 after schools weeks in the UK.

Crossfya launched in 2012. Tim and Josh are still the group's mainstays and after several vocalists over the years Nana joined Crossfya in February 2016. By then the group had already recorded the EP 'More Than Alive', followed by the "Lifesaver" single (the videos for which has gathered over 100,000 views on YouTube. Speaking about "Lifesaver" Tim said, "This was one of those songs that just stuck with young people. Whenever we returned to venue/locations it was always the song they would be singing."

After Crossfya's EP 'Inferno' the group released their first single "All Because Of You" with their current lineup. Said Tim, "It always goes down a storm at gigs." That was followed by their Cross Rhythms radio hit "You Are My" which Tim describes as "a great anthem that expresses the fact that God is our everything."

Since Crossfya's inception they have played concerts all over the world. At a festival event at Vizag city in India they performed to a crowd over 10,000 but they are equally happy to perform to a small crowd at the end of a schools mission. Tim was asked what keeps Crossfya going. "Our faith! It is not always easy doing what we do, but our heart is to share the good news of life and hope found in Jesus - when times are tough it's that reminder that keeps us going. It's always so encouraging when a young person tells us how their life was changed at a Crossfya gig and how Jesus has changed them since."

I asked Tim what he would say to the criticism that today's Church is too enamoured with modern worship and isn't giving the support it should to other kinds of music ministry? He responded, "I think that would be a challenge to the core of our Christianity that we are too focussed on the Sunday encounter/service, and not enough on the mission to reach out and save souls, which has always been the core objective of the church since day one!"