DJ CLOUD is making a name for herself as a popular DJ in Yorkshire. But how hard is it to be a female DJ in male-dominated clubland? Cross Rhythms spoke to her to find out. 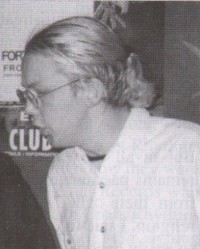 One of the new group of DJs coming through is 20 year old Carol Hansen aka DJ Cloud, who when not spinning is a student at Leeds University and a worshipper at Leeds City Church. Carol regularly DJs with Russell Smith of Club Messiah and has been a DJ for six months now. She is one of the resident DJs at Club Lifted at the HQ bar of Club Nato in Leeds, where she spins R&B gospel, rap and jazz at this monthly-sanctified dance event. The club started out as a private houseparty, but soon moved to one of the best secular clubs in the UK. Carol is going to be even busier when Club Lifted goes fortnightly from 30th September. Club Lifted has gathered a following of clubbers, of whom a significant number do not attend a church and who attend because of the atmosphere and music. The club has gained the attentions of Kiss 105 Yorkshire who have plugged the event.

What is it like being a female DJ in a male dominated club world of male DJs and 'Club Babes' where females are regarded as little more than appendages to the male promoters and DJs and something to put on a flyer or album cover to attract men? "It's extremely sexist. It was summed up by a visit I made recently to a DJ exhibition with some male DJ friends. Everyone else got flyers and brochures. They left me out, assuming I was 'just a girlfriend of a DJ.'" Hopefully the same attitude is not prevalent in sanctified dance, but there are few opportunities for female DJs to come through, especially in a church, which has a background of not allowing women to have a full role in the Church. As Carol says, "I get surprised looks when I get on the decks."

However, Carol is keen to encourage other women to get involved in a DJ ministry. "Women don't see DJing as something they can get into. I say if your calling is to become a DJ, then push for it to happen."