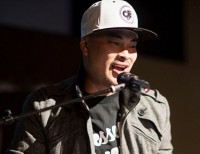 The name Emman J Doctolero is probably known to his wife, kids and officialdom. But to an ever-growing legion of Christian music lovers, DJ em-D is one of America's hottest deejays, who has played music to the throng at dozens of major events while his work as a sought-after record producer has resulted in a string of xRhythms radio hits like "How Can We (ftg Sierra White)"; "Broken (ftg Rubuen Ponce)"; "Fighter (ftg Lissy Lategan)"; "Pursue (ftg Sajan Nauriyal)" and "Turn The Lights On (ftg Spencer Kane)".

DJ em-D was born in Subic Bay in the Philippines but relocated to California by the time he was nine. In 2002, he became a Christian and with a friend, Wes Harp, created an internet radio station, Saving Lost Souls Radio. Over the next few years, demands for his deejaying skills increased, leading to him deejaying at the Freedom Fair in Tacoma, Washington, which drew over 80,000 people. He also took part in the Together We Worship, headed by gospel's Tye Tribett. His attendance at Creation Festival Northwest saw the turntablist working with acts like NF and Propaganda.

Now, a stream of singles bearing DJ's name shows he's adept at producing tracks ranging in styles from house to techno to pure pop. This charming and humble family man spoke to Cross Rhythms about his ever-growing profile in Christian music.

Tony: How much time do you spend performing, and how much recording and producing?

DJ em-D: "I would say half and half. I do a little bit of festivals here and there, and I throw in my own shows, what I call Illuminate - which is a quarterly event where I bring in national artists and local artists in the area. We do that four times a year. Then youth groups and different shows for artists that need a DJ. The majority of my productions, I do that in the evening, spend a few hours."

Tony: You work with a wide range of singers and rappers. Do you look for them, or do they come to you?

DJ em-D: "I already have the artist in mind. I'm building the tracks for them. Obviously we want it to fit their style and sound, so we put together the artist list that I may want to work with, and we go from there."

Tony: Are there some artists who fit your style better than others?

DJ em-D: "Sometimes I would have to make the call and let the artist know that what they came back with doesn't really fit them as far as their sound, where I thought it would fit them. We go back to first step and create a track that will fit them."

Tony: We're in the age of streaming and people are thinking in terms of songs rather than albums. How does that fit for you?

DJ em-D: "This year, 2019, the plan was to get a ton of music out for my listeners. Basically, I have been putting out a single every month. I have a single coming up this month with a rapper from Sacramento - he goes by the name of Mission."

Tony: You were saved in 2002 and started an internet radio station, the beginning of your deejaying and record producing?

DJ em-D: "Yes sir. The mission was to let people know there is alternative music out there, and show them there is good music made for believers and non-believers."

Tony: Have you been tempted to give up the Christian aspect of your work and go for the big dance or hip-hop hits?