They rocked up a storm at Alton Towers. California's DAKODA MOTOR CO spoke to Mike Rimmer. 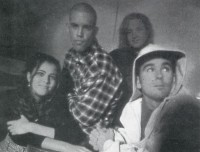 Dakoda Motor Co's front man is in full flow. Peter King is not a man of few words! The words mouth and motor come to mind and not necessarily in that order. He is passionate, he is committed and he is very funny. It isn't difficult to see how he's managed to get the gig as a presenter on MTV! But more of that later.

For the moment, we're sitting in a car park at Alton Towers where Dakoda are playing the Youth Alive event. The band have been going through changes and we talk about Davia Vallesillo leaving the band. Or should I say, Peter King talks... "Davia's been the singer for two albums and she decided to quit the band. New Year's Eve was her last show. She actually wanted to quit the day our new album, 'Welcome Race Fans', came out, but I wouldn't let her and finally there was nothing I could do to keep her in the band... So we were looking for a new singer. We got a new singer named Melissa Brewer who is a friend of Davia's actually, goes to the same church as all of us and she's fit in nicely."

Since the new album DMC have picked up a new guitarist, Elliot Chenault, to replace Dave Colval who played on 'Into The Son' but was then kicked out of the band. With all these changes has Peter King finally found a settled line up? "Hopefully, you never know. I mean, it's my band, I started it, I write all the songs so hopefully these people will stay."

Life on the road with DMC isn't so bad either. A chance to see some of the world and to play straight ahead indie tinged melodic rock. Okay, so I am struggling to categorize the band's sound... How about sunny surf pop? New wave? "I don't know, we just write music and you can call it whatever you want... I just think there are two kinds of music - good music and bad music and it's up to everyone to decide which is which. It doesn't really matter. I hate dance music, I think it's silly but it doesn't mean it's bad just because I don't listen to it. There're heaps of people I would imagine who just think our music's trash and that's fine."

On stage Dakoda Motor Co take no prisoners, melody fighting with the energetic guitar playing to produce a potently powerful attack on the young audience, most of whom are merrily moshing near the front of the stage. King surprisingly doesn't say much but lets the songs speak for themselves, only sharing a little at the end of the gig.

This whole area of ministry is a sensitive issue for King; he becomes even more animated when he says, "Being in a Christian band, what does that mean? Does that mean I have to say spiritual things from the stage or is my art good enough to stand on its own or do I have to give an altar call when I am being paid two thousand dollars to perform? When they're selling my product in the stores, are they marketing my spirituality or are they marketing my music? That's a touchy subject for me. I don't want people to say, 'Buy this band because they love Jesus in such a fresh and unique way.' No! I want them to say, 'Buy this band because the music's good.' I don't want to sell Jesus because he's not for sale and if he was, how could you afford him? So it's like, I'm me, Peter King, name, rank and serial number, and I'm going to Heaven and if you want to talk about it, let's talk. When I'm on stage you've got to win those people over with the music. I wouldn't want to win them over with a message because you can give the message in a million different ways; it doesn't have to be on the stage with a guitar."

These days Peter King is more likely to be recognised on the street for activities other than Dakoda. So is DMC a hobby? "No, it's just part of what I do. I've got lots of jobs. I'm a professional surfer, I'm in a band and I'm on MTV. I host this show called Sandblast which is a co-ed sports competition show. It's set at the beach, we film at Walt Disney and it's really fun actually. It's a serious sports competition, it's pretty funny, there's some wacky events, you know it's very MTV style. Everyone I work with is fun, they're really nice and creative and they hire a lot of young people, everyone's really cool. It's been a blast."

Recently, there's been a growing conspiracy in American Christian music that MTV discriminates against Christian videos. As you'd imagine, Peter King has strong opinions on the controversy. "It's poppycock." He savours the word and continues, "MTV runs and airs what sells and what is good. A lot of people accuse MTV of a lot of things but you know what, MTV only exists to sell advertising. Much like a magazine...everyone is in business to stay in business. You have to sell advertising; you have to run what's quality and what people want to hear."

Being a Christian in such a prominent position, I wondered whether he'd come in for any stick. "One person wondered how I could be on evil MTV but that's about it." He smirks and then speaks with more than a hint of sarcasm, "Evil MTV, they're so evil. You know that channel that just gives artists a chance to be heard by the nation all day long. Nice music all day...so evil!"

For now King has to concentrate on making the music rather than broadcasting it. Dakoda hit the stage and I thank God for Peter King. Whether as MTV presenter, band leader or professional surfer, he's going to have the opportunity to reach more kids in his average week than most of us have in a lifetime.

Thanks so much for posting this article online. I enjoyed seeing DMC play three times (twice in Hawaii and once in California) in the 90's. It was great to read an article about the group.