Dara Maclean: A singer songwriter saying there is a child in every one of us

Tony Cummings reports on the singer/songwriter born and raised in Fort Worth, Texas, DARA MACLEAN 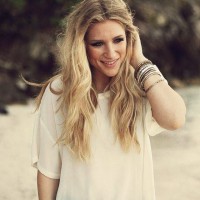 It has to be said that the flood of albums emanating from the Nashville-based CCM industry has slowed down in recent years and that those which have been released have often suffered from the perceived requirements of the heavily formatted US Christian radio stations. It takes an extra special artist usually working with an extra special producer to release music which can stay within the "formula" of such stations yet still show sufficient creative quality to appeal to the ears of less formatted radio stations. like Cross Rhythms for instance. So the fact that five songs from the 'Wanted' album by Dara Maclean, produced by Paul Mabury, have made it to the Cross Rhythms playlist says much for the talents of both singer and producer.

Dara Joy Maclean was born on 19th May 1986 in Fort Worth, Texas. She is in fact of Italian heritage, Dara's grandfather changing the family name from Martorella. Dara showed a prestigious singing talent early on and by the age of eight was singing solos in church. By the age of 13 she was playing guitar and writing songs. Dara told JesusFreakHideout, "I didn't start listening to secular music till around 13; my parents were the product of the '70s, so they cleaned house when they got born again. My mom literally did what I do now but in the secular arena, and then they got born again. She did that on Christian TV and stuff like that and then her dream was to see Matt and me do that, which is kind of amazing. She's really selfless. They grew up on all things soul music, so like Motown, September, all things that had that backbone, that 'pocket' music. I still love that kind of music, old to new. And there are a lot of UK artists that I love, that are just gritty, rootsy, soul. You can tell what they listened to when they were younger. But, when I was eight, my dad got me, literally, every single Crystal Lewis record. I mean, I sang a duet to 'God's Been Good To Me' at my church. And I loved 'El Shaddai' by Amy Grant, and I grew up on Passion worship. When I was 13 a friend gave me a guitar. I discovered Lauryn Hill on Sister Act II. That changed my life. Then I got her 'Unplugged' record and realised 'She's the most crafted, gifted lyricist, as well as vocalist, and I [thought] 'I don't even know if she knows the degree of what she's talking about' but she was literally just talk-singing the Bible. It was very interesting to me and I just said, 'I want to learn how to craft a song like that, knowing what I know.' I've been involved in worship and youth ministry since I was 13. At 22 I stepped out full-time and did three independent CDs, but the evolution of me being an artist happened when soul music met worship music in my life and that's what created it for me."

Dara's independent releases were made under the name Dara Joy. Eventually in 2011 Dara was signed to Word Records' Fervent label where she was put with producer Ian Eskelin, a trusted hand responsible for numerous CCM hits. The resulting album 'You Got My Attention' with its funk and Motown influences was enthusiastically received, JesusFreakHideout writing, "Maclean's debut is great, retro fun that will brighten summer soundtracks and bring another fresh female presence to the industry." The album produced two Christian radio hits, "Free", which made 16 on Billboard's Hot Christian Songs chart, and "Suitcases", which made 18. For her followup Dara was put with the expatriate Australian now residing in Nashville, Paul Mabury. Speaking about Mabury Dara said, "I wanted everything to feel like worship, as an acoustic solo artist. And he, because of his experience in the Hillsong world as well as a soul/funk drummer all over Australia, he knew how to merge those things really beautifully for me and we didn't have to try to be soulful, we were just going to be who we were. We would talk about God, we would cry, there would be musicians and people in the studio who would light candles and I would go sing for hours. It was really beautiful and I would want that to be the case every time. And regardless of what does or doesn't happen with this record, I know, two years later, it's me, but two years older. Hopefully we laid a foundation two years ago. It's an awesome, exciting thing to get to keep building on it and just trust the Lord that the most people can be reached and that the music and the content heals hearts. And only God can do that, but to get to be a vessel of that."

One of the pivotal songs on 'Wanted' is "Set My People Free". Dara told Breathecast.com, "A friend of mine in Nashville, Justin Ebach, Paul and I wrote 'Set My People Free', which is one of my favourites on the record because of the cause in my heart against trafficking. It's an anthem that I pray dispels the darkness for the ones unseen and in need of rescue."

The title track of 'Wanted' was launched as a single with a very moving video. Recounted Dara, "We were in Mexico and on the streets and it was a very organic thing that happened when we turned the cameras on. They just kind of flooded the streets and we were like 'Do you guys want to be in a music video?' And it was just an amazing two days. Best job ever. Hopefully, it's just this beautiful metaphor to say there's a child in every single one of us. I think it's important to focus on the universal need because every single one of us is the same, regardless of whoever would tell me 'this is your musical demographic" and I'm like 'that's awesome, that's great and we'll focus on that demographic, but who does not need to be loved?' The hardest of hearts or the youngest of children? Like five years old, 90 years old, male, female. The universal need and driving force is like someone telling me that I wasn't a mistake or that I'm worth it. When I know someone's going to fight for me, man, I feel invincible! And the Bible says that we love [God] because he first loved us, John 10:10. And it's just this revelation of [speaking that] especially to a fatherless generation. I think that a lot of men are really scared that they're going to be like their fathers or they didn't have a father so they're like 'I've got nothing to pull from, I don't even know what the love of God the father is like because I didn't have one,' or any girl that you meet. And so, again, this is not like a demographic, I think this is a human need. So, my prayer is that 'Wanted' as a whole would speak to that and would offer the answer of a Father that's never left and says that you're worth it."

Since Dara's marriage to Donnie Petty in May 2013, things seem to have gone very quiet for this most gifted singer/songwriter. Her website doesn't indicate any planned tours and neither is there any news of a new recording. We can but hope that more music is still to come from Dara.