Dave Bilbrough: Let There Be Love

A tribute album to commemorate DAVE BILBROUGH's 25 years in ministry 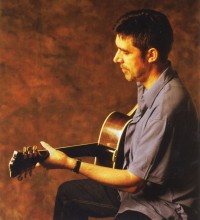 In 1999 singer/songwriter and worship leader Dave Bilbrough clocked up 25 years in ministry. To commemorate the veteran's longevity, Kingsway Records have released a very special kind of tribute album, featuring performances of Dave's best-known songs from a bevy of artists including Noel Richards, Robin Mark, Sheila Walsh, Stuart Townend and even Dave's son Jonathan Bilbrough. The album, let There Be Love', was produced by Mark Edwards (known for his re-mixes of recent Delirious? singles), while among the musicians featured in the accompaniments are Phil Keaggy and Roddy Frame of Aztec Camera. We quizzed Dave about the project and his marathon ministry accomplishments.

Tony: What would you say are the two or three highlights of your ministry so far?
Dave: "As I look back over 25 years of ministry I have certainly experienced some highs, as well as some lows, as I've tried to be faithful to the things that the Lord has entrusted me to share with others. Singing 'Abba Father' at the Royal Albert Hall at the age of 19 would certainly be a highlight. It was a time when God was moving so powerfully, that we had to book the RAH, as there wasn't anywhere else big enough to hold the people who wanted to come to worship him. It was filled with the minimum amount of advertising. I can still remember so clearly standing up on that stage, looking out at the architectural splendour and up to the rows of balconies that seemed to go on for ever, as I nervously sang out those words. How grateful I am for the leadership figures such as John Noble, Gerald Coates and Maurice Smith who encouraged me and believed in something of my gifts while I was at such a young age. Little did I realise then the journey I was on.

"Another highlight is slightly more recent. To mark the launch of what was to be Roy Castle's final recording, a special reception was held at Ronnie Scott's, the legendary jazz club in London. I can't tell you the thrill it gave me when, with some of the leading players around in the jazz scene, Roy launched into a big band rendition of 'I Am A New Creation' for his first song. He also recorded this song as the opening track on the album. I felt honoured when his track was played at his memorial service, while people stood in silence, to remember Roy and what he had meant to them. To get to know the man and see his face shine in those last difficult months was indeed a privilege.

"Primarily, my biggest joy is when, while I am in God's presence and feeling vulnerable, the Holy Spirit comes and does something beyond my expectations in a worship situation. God moves in a variety of ways. Whenever he comes there is always something fresh. To see people's hearts touched and to see something of his Spirit released amongst us excites me so much. To be a part of that is what I was born for."

Tony: So many of your songs have lasted the course. Do you have an insight into why this is and what it is about a Dave Bilbrough song that makes it stand out?
Dave: "A song, if it is to have any lasting value, must be real, born out of experience and relationship. I, therefore, try to avoid writing out of duty or insecurity in order to come up with the latest thing. It has to be a response to God when my heart is moved. That's not to say that I'm not disciplined, but after a while you are able to spot the flow and anointing upon what God is opening up. Grace is one of the central themes of my work; another is my own longing to know God better. Maybe folks can identify with me in these areas, and make my words and melodies their own heart cry. I think the task of a songwriter is to put into words and music, thoughts that people unconsciously think, and to use songs as the expression. Nothing gives me greater joy than to see that happening in a congregation.

"To me, a good song is a marriage of the melody and the words together. Sometimes the sound of the word is just as important as the word itself, so whilst upholding the need for theological content, I am constantly looking for words that flow with the melody and sound musical. Perhaps it's a combination of all these things that people find enduring in my songs."

Tony: There is some radical stylistic re-working of your songs on the new album. Can you give us your personal responses to some of the renditions of your material?
Dave: "I am thrilled to hear the interpretations of these songs -1 think Mark Edwards has done a tremendous job in translating them to relate to, perhaps, a different audience than would usually respond to my material. A song can be done in a number of ways, and why not? Remember that when some of these songs were originally written, they were radical in musical style in respect of what had gone before, and were directed towards the youth generation of that time. I am very grateful to the many friends who gave of their time and skills to participate in this album."

Tony: Can you tell us some of your experiences at the Preparation For Revival meetings?
Dave: "The Sowing The Seeds Of Revival meetings ran for an 18-month period, sometimes five nights a week. Amongst others, Noel Richards, Sue Rinaldi and I were responsible for leading worship during these times. They were characterised by powerful times of passionate prayer and ministry in the Holy Spirit. Each evening the front of the platform was a mass of people experiencing deep repentance, and receiving a fresh touch from God. It was an honour to be involved, and the meetings proved to be a great environment for the musical experimentation and exploration of the prophetic nature of my calling. It was during this time that the songs from my last album, live At Marsham Street', were birthed in me, and so it seemed a fitting place for the recording to happen."

Tony: How difficult is it for you to sustain a passion for what you do after such a long period in ministry?
Dave: "When I'm struggling, discouraged or just plain weary, God always brings me back to his unconditional love. When I lose sight of this I am in trouble. My experience is that there is a world of difference between trying and trusting. We can be working hard and find that God is at rest, but when we find our rest in him we suddenly find that God's at work in our lives.

"Just like Paul, there's something that keeps drawing me on. I feel there's a pioneering spirit inside of me; I just want to keep moving forward, learning and changing, not looking back to the past but pressing on. I suppose that finds its expression in me in my wanting to develop a wide range of musical styles. When I first started in the music ministry I wanted to be involved in something corporate, that advanced, that broke new ground and brought innovation -1 guess that's what I'm excited about with this album."

Tony: What are your plans for the future?
Dave: "In many ways, I see the past as the foundation for the future work that God wants to do in me. I'm not giving up yet. I see an increasing involvement in taking songs overseas, particularly to developing nations, as well as at home. For many years I have seen the potential of my music to touch people in all walks of life. To that end, there's a new initiative that I'm developing, starting in theatres around London. I'm sharing something of who I am and my spiritual journey, with songs and stories, taking some of the lessons I've learned in a worship situation, to release the presence of God to people outside who do not know Christ yet.

"So, my plans for the future are to keep moving forward into the new things that God has for me. My wife Pat, sons Jon and Dan and our close friends are a constant source of encouragement to me in all of this."

MAL POPE ON BILBROUGH
"I've always had the greatest respect for Dave as a musician and songwriter. When I first got involved in gospel music I remember working in studio 2 and Dave was in the big Studio 1. We would meet in the kitchen, and he was always friendly and gracious, even though in our terms he was a bit of a star. Also, he has written so many great songs which have almost become 'traditional' in the sense that hymns by Wesley have become part of the Church.
"The producer Mark Edwards really is a bit of a genius. We've worked together on the 'City Of Gold' and 'Shipwreck' projects and he's got a great reputation in the secular field for his jazz playing. He rang me up and played the track down the phone. It sounded like a cross between the Beatles and Drew Hill. I couldn't wait to have a go at such a well-known song done in such a brand new way."

NOEL RICHARDS ON BILBROUGH
"'All Hail The Lamb' is probably my favourite Dave Bilbrough song. I remember calling Dave shortly after the album with that song was released and telling him what a great song it was. It is ideal for small groups, and large, and I asked Dave to sing it at the Wembley Stadium event in 1997. The key to staying the course is keeping your life and ministry accountable to others. We need to have people in our lives who ask us the hard questions and keep us focused on what God is asking of us. I know Dave has continued to do this. The other important.aspect is to have the heart of a servant. In this, Dave is a great example to all those young musicians who aspire to serve God and his people with their music."