David Crowder Band: About to fold with their final album Give Us Rest

12 years down the line with only three or four moments of conflict and the David Crowder Band are this month playing their final gig. The Texans took modern worship music to some unexpected new places while releasing 11 albums and four EPs. The last time Cross Rhythms wrote about DCB was in 2007. Since then they have delivered 'Remedy', 'Remedy Club Tour Live' in 2008, 'Church Music' 2009 (which hit number 11 in the US), the Christmas project 'Oh For Joy' in 2011 and now their final album, the mammoth-titled (and mammoth length) 'Give Us Rest or (A Requiem Mass in C [The Happiest of All Keys]).' David said in a recent interview with Christianity Today that "this is probably the most eclectic record we've done."

It was of course the student ministry events organised by revivalist Louis Giglio which were to be the platform for the David Crowder Band's current line-up: Crowder (vocals, acoustic guitar, piano, programming, theremin, keytar, electric guitar), Jack Parker (electric guitar, background vocals, Rhodes piano, mandolin, banjo), Mike Dodson (bass guitar, keyboard, cello), Mike Hogan (violin/strings, turntables, guitar, keyboard), Jeremy Bush (drums, percussion, bells, programming) and Mark Waldrop (electric guitar, mandolin, background vocals). David began to attend more and more Passion events, the first one being Passion: The Road To One Day in 2000 and ending at the Passion: Here For You in 2011. Said Louie Giglio, "David's music was finding a place in the body of Christ that no one else's music was filling."

DCB have worshipped with organs, computers, guitars, choirs, keytars and banjos. Throughout their musical career they have had many achievements with songs like "Everything Glorious" winning Gospel Music Association awards. A pivotal album for the group was 'Church Music'. In a 2009 press release the singer/songwriter wrote, "I hope this album serves as a reminder of music within church, of its richness and its broadness."

In mid 2011 the David Crowder Band announced they would fold after a final tour. David thought, "Oh my goodness. . . this is going to be rough". He got halfway through the last song and cracked up. Their final appearance at the Passion event - broadcast worldwide by God TV - was also highly emotional. Alongside their stirring final performance comes the swansong album, 'Give Us Rest'. Amazingly, it has 34 tracks packed into a double CD and explores the forgiveness and judgment on man's relationship with God. David is clever with the way he creates his lyrics as the songsmith's album is based on the requiem funeral mass from liturgical traditions. David said the requiem masses have attracted composers because it's such a great theme to write about. He then went on to explain why there are so many tracks on this album. "It didn't feel like we wrote 34 tracks. . .when we got into trying to enunciate what a requiem mass was to us, and how to keep it hopeful and yet still feel like we were keeping the form intact. . . There's a lot of content that we felt like we needed, we couldn't just disregard."

David told Christianity Today, "What's weird about this record is that about 85 percent of it was done with all of us in separate locations. All the guys have studio setups at their houses, so all we were doing was sitting around in our own place uploading files to each other. It's the longest record we've ever done, and the most amount of work we've ever put into a project - and nobody can really tell you when they recorded it! It was just spread out in little spurts and stops, and files getting passed around so that you couldn't see the outcome or where the thing was. So that process eliminated the potential for a big emotional moment. The sentimentality was absent simply because we were not in each other's presence." This means the band spent only 15 percent together. "The closing of the record are four bluegrass tunes, but we actually recorded those at the beginning of the process so that we could know where things were headed. But when you're in a room playing with each other it's like another level of connection, and so it's sort of a good way to ground the record, in a sense. And then we went off on our own after that. But it's not that we don't feel the finality of it. We have a good sense of closure." 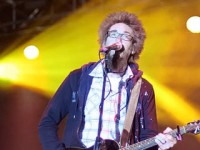 The opening track of 'Give Us Rest', "Requiem Aeternam Dona Eis, Domine", is certainly attention grabbing. No music, no lyrics, just church bells, footsteps and a delicate voice of someone praying in Latin. Then after 50 seconds the melodious sound of the piano leads into the next song, "Oh Great God Give Us Rest". Near the end of the DCB's album, "Oh My God I'm Coming Home" is like a metaphor of Heaven for Crowder. The Band has one country hit "Why Me?" performed acoustically while elsewhere the band move from stadium rock to electronica to folk and bluegrass. The first single on the album is "Let Me Feel You Shine". Said Crowder, "I don't think I have written as personal a song as this one. For me, all of the experience of closing this chapter, of looking ahead and trusting, is in this song."

David was asked what was his best memory of being in the band. "It's funny, but when I get nostalgic, I'm like, man, it's our moments of conflict. The first one happened on our first tour, loaded up in a Suburban and pulling a trailer. We drove from Texas to California and spent about three months going up and down the coast of California, driving non stop without any sleep. About two days before we were supposed to head back to Texas, Jeremy Bush and I get in this fight. We wind up outside of the Suburban, ready to go at it, and we're about to hit each other. . . and we started just laughing. That's probably one of my favourite moments because it was just this eruption of everything that's human. But if I have regret, looking back now, it's that we didn't actually fight. It's both my favourite moment and also my greatest regret."

David has mixed feelings about calling an end to the band and what may lay ahead of him. "At times it feels wonderful, and we can look back and think, 'Man, this is a great body of work that we can be proud that we were a part of.' But I don't know if that outweighs our trepidation of what's in front of us. There's this confidence and courage that we could only attribute to the Divine at work, knowing that we're stepping into what he has next for us. But at the same time you're like, 'Ah, this has been such a great thing, so wonderful.'

I think that's why people hang on and don't let go - because it still works and they still love what they're doing, and it's such a hard thing to not do what feels natural and easy. I think this might be one of the beautiful things about how we're ending, that there's no sense other than to follow what we feel like, as people of faith, when you're told to go elsewhere, you should obey and hope that you're hearing the right stuff. So that part of it, I think, feels even better than 'we're going out on top.' To me, it feels better to say we're doing something that doesn't make sense, culturally speaking. We're placing value on something that is not typically valued in our culture. And that part of it is what I feel most satisfied in."

Throughout their existence the David Crowder Band has being named among the "most thoughtful, progressive and exciting acts in contemporary Christian music" by The New York Times. But it all has to end sooner or later. Crowder told Sam Hailes, "None of us could answer and say what in the world is coming next because we genuinely don't know. But all of us have this real sense of excitement and the future is something we're looking forward to, whatever it is."

The opinions expressed in this article are not necessarily those held by Cross Rhythms. Any expressed views were accurate at the time of publishing but may or may not reflect the views of the individuals concerned at a later date.
About Lucy Clarke
Lucy Clarke is the youngest ever writer of a Cross Rhythms article. She is 15 and lives in Stoke-On-Trent.

I go school with lucy and this is so cool! I hope the best for her in the future!