Mike Rimmer met up with DAVID HUFF in Nashville 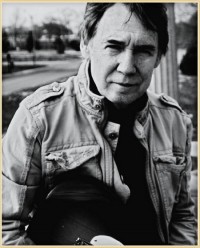 Mike: It was a night in jail that caused you to become a Christian wasn't it?

David: It actually started in 1974. Our drummer had an experience with God and he was born again. He had received the Holy Spirit and we thought he'd received something crazy, or maybe overdosed on something! But he quit the band after witnessing to us that he'd found everything that God had to offer. Three years later when I was with United Artist Records I was doing really well but I was missing something deep inside. One night I was real loaded on drugs and my old drummer witnessed to me about Jesus. At first I said, "Will you please change the subject!" He didn't change the subject, he kept talking about the Lord. So I came down off the drugs but I started getting "up" on just hearing about the name of Jesus Christ. So that started me on the way. In six months I had three car wrecks and I got busted for drugs in Mississippi! It was the best thing because it really sobered me up big time! In fact, when I walked out the jail house I turned round to this cop and I said, "D'ya know what? I made a change in my life tonight." So it was in 1977 that I became a Christian.

Mike: How did you become a guitar player?

David: When I was 11 years old my daddy bought me my first guitar. It cost $10 and he taught me my first chords. But we didn't have electricity where I was brought up. We were very, very poor but when I was 15 years-old we got electricity and we got a radio and all of a sudden I started hearing all these other people, these licks they were playin'. So God blessed me that I had ears to hear. It was one of those things that I just picked up.

Mike: You're best known for founding the band David And The Giants. Tell me about that.

David: The night that I received Jesus Christ, I had no intentions of playing music anymore. But our pastor told me to take up my guitar and write songs for the glory of God and then we could go out and try to win the lost and use my kind of music. The Lord started giving me songs and we went out from 1977 until 1998. When David And The Giants disbanded in '98, I thought that portion of my life was over. But I heard the voice of the Lord clearly speaking to me, saying these words, "Keep on singing, keep on singing my songs," so today I'm still singing his songs.

Mike: You've got this new album 'Proclaim' and it's building on the legacy of David And The Giants isn't it?

David: We didn't intend for that to happen. Some of the songs are reminiscent of David And The Giants but you've got to remember, I was David back then and I'm still David today! And the roots are still there. So I didn't go with the intention of sounding like this or that because I always want to sing a new song unto the Lord. But it's still going to sound a little bit like David And The Giants because that was also me!"

This article is inspiring and encouraging. It proves the miraculous power of God. I first heard David and the Giants in 1978, and have known them personally for many years and can testify to the fact that they truly live the life they sing and preach.