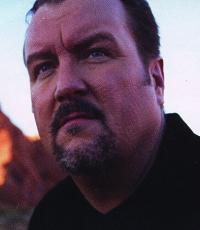 The release in the UK by Everlasting Books And Music of the 'David: Ordinary Man...Extraordinary God' album should not go unnoticed. For a start, it features some of the best known voices in American CCM, namely Bob Carlisle, Greg Long, Clay Crosse, Russ Lee, Steve Camp and Scott Krippayne. But more important than that, the project is a gripping musical portrayal of one of the most intriguing characters of ancient history... David. The publicity sheet for the album succinctly sums up the spiritual potential in examining David's life, "His story offers hope for all of us - dysfunctional family, tragic loss of his closest friend, discharged and hunted like a wild animal, admired war hero, powerful leader, adulterer, murderer, betrayed by his own son, homeless and yet a man after God's own heart!" The creative driving forces behind the album are songwriters Scott Krippayne, Tony Wood and Steve Siler.

Tony Wood, a gifted lyricist who's written for a huge number of well known CCM acts including Point Of Grace, 4Him, Ginny Owens, Susan Ashton and Natalie Grant, spoke about the origins of 'David: Ordinary Man...Extraordinary God'. "Scott Krippayne, Steve Siler and I had worked together on a multi-artist project for Discovery House on Scottish Martyrs called 'Celtic Cry'. During the production of the record, Brian Felton talked with us about the possibility of creating a project on the life of King David. The idea was to do some songs about his life but also to give context for what was going on in his life when different Psalms were written. Brian sent us each a notebook of so much material on the life of David. We spent time with it individually and then got together to plot out what we felt the most significant 'moments' of his life were that we needed to cover. We knew so much would have to be left out since there were only 10 slots on a record so we worked to find the balance of songs that were about David and songs that were really David's voice speaking through the Psalms."

Another hit Nashville songwriter involved with the project was Steve Siler. Steve, who has clocked up an amazing 35 Christian radio top 10 singles, spoke about how he, and his songwriting compatriots, got a feel for the subject of King David. "It all started with Scripture. After reading all of the passages about David we then got together to plot out which stories might best convey the essence of who David was and what he faced in a way that would resonate with people's contemporary lives; that's where you get songs like 'I Cannot Hide From You, and 'When I Am Afraid'. Rather than tell the whole story from a third person perspective we decided early on that the first song would be expository and everything that followed would be first person. This makes it a lot easier for the listener to relate to what David went through because as they sing along with the songs they are singing about their own lives: The Lord is 'my' rock, the lord is 'my' shepherd, purify 'me', etc."

Scott Krippayne is of course a well established singer/pianist on the American scene. When asked how such well known figures as Bob Carlisle, Clay Crosse and Greg Long also got involved with the project, he was completely candid. "To be honest, I don't really remember how each one became involved. I think everyone put their heads together (record company, producer, writers) and we had our thoughts on who we'd like to hear sing the songs. I'm thrilled with the artists who were involved. I'm grateful that they caught the vision and said yes." 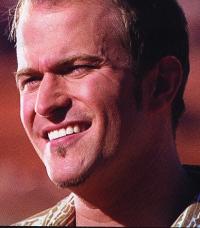 Scott summarised the album's vision as "a hope of capturing the heart of David - making a project that might honour him," but then went on to say more. "But probably more importantly, the intention was to produce a record that would allow the listener to know a little about David, and maybe even encourage them to dive in to their Bible and discover even more. I learned quite a bit from the writing process - and I hope the listeners can take something away from it too."

Along with the audio version, 'avid: Ordinary Man...Extraordinary God' is released with a companion DVD. Shot in the Nevada desert it features each of the participating singers performing their songs. The filming of the project was far from easy. Commented Scott, "I remember not having coffee and drastically cutting back my dairy intake for three months so I could pull off a good vocal on 'Twenty-Three'. And I remember how cold it was during the night shoots of the video. I'm pleased with how both came out though."

My wife for life and I love, love and love all of these great men of Abba Daddy Father Papa God's amazing spiritual Christ-centered, infused by the Holy Spirit of Truth songs of worship and spiritual hymns for Him as they help lift His Body of Christ to His Throne Room of Father God's Good Graces and Mercies that ARE New EVERY Morning, Amen!!! Brother Bob Carlisle's most legendary and beautiful Butter Kisses Song of purity, hope and love song of Daddy's Little Girls Wedding Day brings us still to this day great tears of joy and sadness now daddy's passed on to Eternity's Rest In King Christ Jesus; as this was the Beautiful Daddy-Little-Girl-Daughter Dance Song that my Wife for Life and my father-in-LOVE danced too on Saturday, July 14th, 2007!!! Keep Shouting and Praise God The Father, God The Son and God The Holy Spirit from the Roof-tops to His Court-tops until King Christ Jesus Returns VERY Soon For Look Up Yours and Mines Redemption Draws Nigh/Near!!!

are these songs published yet and Where can I get hold of the sheet music of these songs for my church accompanists, as these are all tenors who are singing I'd like to sing a few of them for our church service as offertories. These song can make a great impact on our congregations for all the reasons stated above.

i love this album, i was wondering were i can get a sheet music for it

You guys rock! I was toched by the music you sang. It actually made me think about all the things God did (not only for david) for us. I especially like "I can not hide from you" and " Purify me". All of them were great though. Keep singing praises to the lord!