The leader of American rock band DAY OF FIRE has a powerful testimony, as Tony Cummings reports. 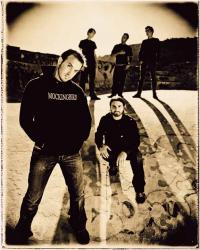 The release by Authentic of the self-titled Day Of Fire album brings onto the Christian platform a gifted singer/composer, Joshua Brown, with a most extraordinary testimony. Having drunk deep from the chalice of drugs, sex and rock 'n' roll the singer had a dramatic encounter with the living God. Growing up playing in bands around Jackson, Tennessee, Joshua's group Full Devil Jacket ended up doing tours with Nickelback, Fuel and Creed. But things were far from well for the young rocker.

"About a year and a half after I signed the record deal (with Island/Def Jam) I ended up ODing on heroin," said Brown. "I went to rehab after that and got cleaned up. As soon as I got out of rehab, I went on tour with Creed, playing the biggest shows of my career. I had money, I had girlfriends, I had everything I thought I needed, but I was still empty inside. I was still feeling just as insane as when I was doing drugs."

It was in the middle of preparing a second Full Devil Jacket album that Joshua finally started listening to that small voice inside him that beckoned him out of the darkness. "I started looking other places to find peace. I started reading the Bible a little bit, and God started speaking to me through that. I tried to do both for a long time - be a rock star in Full Devil Jacket and serve God. But eventually, I quit reading my Bible and trying to serve God, and everything got worse. We flew out to LA to record and while I was out there I pretty much had a nervous breakdown. I couldn't play, I couldn't sing, I couldn't write, I couldn't do anything because I was still trying to live both lives. Eventually, I got to the point where I told God I'd do anything it took to find sanity. I said, 'If you want me to quit that band, I will. Anything you want me to do, I'll do it.'"

Brown continued, "Right in the middle of the recording process, I flew back to Jackson to collect my thoughts and myself. I started going to this church and after about three months God began to really work on me. He began taking away my addictions, began taking away my depression, began taking away my insecurities. I quit the band before the second record was finished. I turned away from the record deal, the publishing deal, all of that, and I just started running toward God."

Joshua withdrew completely from the music business, sharing his experiences and newfound wholeness with anyone who would listen. "I started going into jails and telling people what Jesus had been doing in my life. I started really concentrating on what the Word of God says to do, and my life began to radically change."

After a two year hiatus Brown began writing songs with Christian guitarist/songwriter Gregg Hionis. Eventually Brown and Hionis recorded a demo which would later become the foundation for Day Of Fire's debut album. About their album Joshua said, "It's very aggressive because we are reaching out to an aggressive generation. It's a vehicle and a language. I want people to have an encounter with Jesus Christ through this music and be radically changed forever, 'cause that's what happened to me."