Deborah Pritchard: The classical composer with a Nine Beats connection 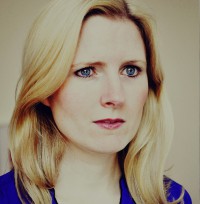 By now many Cross Rhythms listeners and readers will be familiar with the 'Nine Beats To The Bar' album by Nine Beats Collective. Described as a "collaboration of world class musicians, artists and songwriters, this extraordinary album is similarly described as "an eclectic soundscape of R&B, pop, rock, African vibes, acoustic threads, jazz funk and classical." Note classical. Quietly underpinning a lot of the more percussive music was some penned by the modest, unassuming composer Deborah Pritchard.

Possessing a Ph D, this multi-instrumentalist also lectures and gives tutorials at Oxford. She has had her music performed widely - not least by the London Symphony Orchestra - and has worked with all sorts of interesting people. We met in central London, along with a handful of people from the Nine Beats management. She remarked that there had been fewer people in attendance the previous week, when she had been interviewed by BBC Radio 3. We talked in general about creativity, faith and, in particular, the exploration of the Bible's Beatitudes which is Nine Beats.

John: I understand that a lot of your work is based on the visual arts. How did you end up working with collaborators from the fields of R&B, rock and so on?

Deborah: I was contacted by the Nine Beats team through a colleague of mine who'd already recorded a song for the project. Nine Beats approached me and said, "Will you please write something which is more classical?" So, if you like, they're string interludes in-between the pop songs, which I found quite an interesting thing to do. I'm usually writing for the concert platform, or something very much in the classical context and so this was a bit different for me, and also the subject-matter was quite inspiring - and beautiful. We had quite a few discussions about what it was about and what it was for - and we ended-up saying that it would be for two violins and a cello. Then it was down to me to think what was I inspired by. But in essence the principle of the Beatitudes is such an incredibly resonant one for me, because it's about illuminating that creativity and it's the idea of God's grace and how we are all loved, equally, and how this creativity can illuminate this pure, wonderful love that he has for all of us.

John: The phrase nine beats to the bar seems to be a double play-on-words, humorously playing with music timing and the word beatitude.

John: It sounds a bit radical and that may be appropriate, as the nine Beatitudes are very radical - they highlight the "upside down" nature of God's economy; "the first shall be the last and the last shall be the first" and that what is often revered by men, may sometimes be an abomination to God.

Deborah: For me, it's the idea of equality. We are all loved, regardless of who we are, or how happy or sad. Every single person has been created equally. When you look at the Bible, and you read the teachings of Jesus and how he was, everyone was treated equally with his love. That, for me, resonates through the Beatitudes. It doesn't matter who you are: God's grace is for everybody and that's a wonderful thing. It's something to be almost rejoicing in, and it's a wonderful, beautiful thing that each one of us is beautiful in God's eyes.

So yes, the teachings of the Beatitudes are wonderful and I chose four I could respond to, musically. The first one I chose was "Blessed are the pure in heart, for they will see God." I love this idea of having complete transparency and purity in your heart and that you're not holding onto anything and that your tread is light. So in responding to that, I had this idea of footsteps - this very gentle treading on the earth and I call it "Tread Softly", the title of the piece. The idea of footsteps was also like a heartbeat and that this heartbeat was heard very, very clearly and there was a purity which wasn't burdened by anything. This, for me, is the wonderful thing about prayer and being connected to God - and you try and not let everything in the world get in between that; try and make that connection as honest and sincere as possible.

This piece moves through this repetitive phrase and the cello that repeated over-and-over, a musical technique called grand bass, and that was about footsteps: about heartbeat, purity, transparency and that was the inspiration for the first track.

John: It sounds haunting, in a good way! How about the second?

Deborah: That was "Song For The Earth" and I wrote it about "Blessed are those who mourn, for they will be comforted." Having recently lost my father, this was something which I resonated with on quite a personal level. It was an opportunity to write something which wasn't exciting or gimmicky, but was just a slow, sincere, honest piece, written a little like a chorale - very simple rhythms, all about meaning. So it had a sense of sadness but so much meaning, as well. The piece moves towards a sense of light and hope.

John: The third Beatitude you selected was. . .?

Deborah: "Blessed are the meek, for they will inherit the earth." Again, you don't have to be this powerful, wonderful person to be expressing your love of God; you can be quiet - you can hold it in; meek, as they say. God knows what's in your heart without you having to say it. So with this one, I remember having the idea of building these different textures that weave around each other. They begin in quite a fragile way. They gain in strength - this idea that you were once meek, will one day be strong and that God's grace is for everybody, along with equality and love; it's love which has the power.