Dionne Warwick: The hitmaking chanteuse returns to her gospel roots

Tony Cummings reports on the gospel comeback of one of the biggest recording stars of the '60s and '70s, DIONNE WARWICK 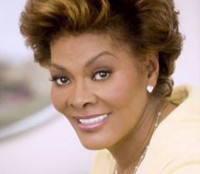 It was while I was out in Canada in 1997 checking out the Toronto Blessing for Cross Rhythms magazine that I had a shock encounter with Dionne Warwick. Not that she ever knew. Turning on my hotel room TV and idly flicking channels I was momentarily delighted to see on a cable TV programme the high cheek boned, still beautiful face of Dionne - who for my money was and is one of the great voices of pop/R&B. But my pleasure quickly turned to numbed shock as I realised that Dionne was on the TV as the regular presenter of a weekly TV show for psychics. How a singer with an impeccable gospel singing background came to be a spokesperson for the Psychic Friends Network television informationals is one of those bizarre conundrums tied up in the worrying tendency of showbiz superstars to justify all their actions. Dionne subsequently told Jet magazine that though she was fascinated with the paranormal the show was not meant to take the place of God. "I am no different from anybody else and the Psychic Friends Network happens to be a job. I'm not a psychic. It's something I'm having a good time doing and I don't see what's wrong with it. I feel that there are people who have developed 'eyes' and have an ability that we have to question because we can't do it. My grandfather told me a long time ago that we tend to fear what we don't understand." She went on to stress that "God will always be first. God can't be any place but first." Such statements didn't convince everyone in the Church.

But now with the release of Dionne's gospel album 'Why We Sing' we will finally be able to put the whole sad chapter behind us and simply enjoy Dionne's enthusiastic renditions of "Jesus Loves Me", the first song she sang as a six year old member of St Luke A.M.E. Church in Newark, New Jersey; "I'm Going Up", a scorching duet with BeBe Winans; and "Rise, Shine And Give God The Glory", a number first popularised by The Drinkard Singers - the legendary group which was to become an unofficial singing academy for R&B singers with Dionne, sister Dee Dee, Judy Clay and Cissy Houston (Whitney's mum) all being one time members.

Dionne was born Marie Dionne Warrick on 12th December 1940 in East Orange, New Jersey, her father, Mancel, was a gospel promoter for Chess Records and her mother, Lee, sang with and managed the Drinkard Singers. Although the Drinkards recorded for such labels as Savoy, Victor and Choice and were one of the first gospel ensembles to come to the attention of the white audience after their appearance in 1957 at the Newport Jazz Festival, Dionne never recorded with the group during their heyday. However, as she told Viv Broughton for his book Too Close To Heaven, "You might say I cut my teeth on this music. Coming from a gospel singing family, that was the music and teachings I grew up with. It was, and it still is, the happiest sounding and feeling music that I know. They were the best singers I ever heard - I'm proud to be part of that family."

While still a teenager Dionne formed a singing group, the Gospelaires, with her baby sister Dee Dee and her young aunt Cissy Houston. After graduating from high school in 1959, she won a scholarship to the Hartt College Of Music in Hartford, Connecticut. Meanwhile, the Gospelaires were becoming more and more popular, though not within the gospel sphere. New York record producers were looking for black female voices to give their pop and R&B records edge and soon the Gospelaires were heard on big hits like Ben E King's "Spanish Harlem". It was during one of those backing sessions, for the Drifters' "Mexican Divorce", that Dionne got her big showbiz break. The song's composer Burt Bacharach was struck by Dionne's voice, a lilting soprano with delicate jazz-like inflections, and asked her to sing some demos of his songs he'd written with Hal David. David pitched one of the songs to Florence Greenberg, who owned Scepter Records - home to hitmakers of the period Chuck Jackson and the Shirelles. Greenberg loved Warrick's voice. She signed her to a recording deal and had the David/Bacharach team compose the album. It was an instant hit with the single "Don't Make Me Over" becoming a Top 20 pop hit in early 1963. There was just one problem, though. The graphics artist misspelled Warrick's name as Warwick on the 'Anyone Who Had A Heart' LP cover. Because the album was a hit, Dionne considered it a good omen so she kept Warwick as her stage name.

Over the next decade the trio would record a string of intricate orchestrally arranged pop soul ballads that remain some of the most memorable moments in the history of popular music. Classic Bacharach and David-penned hits like "Anyone Who Had A Heart" (1963), "Walk On By" (1964), "Reach Out For Me" (1964), "Message To Michael" (1966), "Trains And Boats And Planes" (1966), "I Say A Little Prayer" (1967), "Do You Know The Way To San Jose" (1968), "The Girl's In Love With You" (1969) and "I'll Never Fall In Love Again" (1969) built an international pop music career. Bit by bit show tunes and schmaltz began to clog her stage performances and albums but her fan base, who recognised Dionne as one of the great showbiz chanteuse, remained huge. In 1968 she surprised industry observers by recording a gospel album, the rather oddly named 'Magic Of Believing', and even used the Drinkard Singers as backing singers. The project contained old school renditions of songs like "Somebody Bigger Than You And I", "Blessed Be The Lord" and "Steal Away". The following year Warwick included a version of the Impressions oldie "People Get Ready" on her 'Soulful' album which peaked at number two on the R&B and number 11 on the US pop charts.

As styles in R&B and pop changed so did Dionne. She enjoyed a number one hit in 1974 with a duet with Detroit's Spinners with "Then Came You" and another in 1985 when such luminaries as Elton John, Gladys Knight and Stevie Wonder joined her on "That's What Friends Are For". In 1998 she recorded 'Dionne Sings Dionne' for River North Records. The CD was rumoured to have cost over half a million dollars to produce and featured duets with Tyrese and Celia Cruz & The Pete Escovedo Orchestra. Among the featured tracks were Warwick's first gospel recordings in years on Tim Miner's "Humbly I Pray" and "All Kinds Of People".

The release this year of 'Why We Sing' has rather taken the gospel community by surprise. Journalist Andy Argyrakis asked Dionne what she enjoyed most about recording it. She replied, "I think the fact that I'm singing something that's truly me and having the opportunity to share it with people that I love - my sons Damon [Elliot, who produced] and David [Elliott, songwriter and duet partner on "Seven"], my sister Dee Dee [who duets on "Why We Sing"], and my friend BeBe Winans [duet partner on "I'm Going Up"]. Plus it was time for me to do another [gospel album]!"

It was a conversation with Edgar Bronfman Jr, the CEO of Time Warner, which motivated Dionne into recording 'Why We Sing'. She explained, "He had heard me sing gospel almost 20 years ago and asked me, 'Would you do gospel CD for me?' And I said, 'I would love to, but let me think about the time I have.' I didn't think for very long. I hadn't even gotten home before I called him back and said, 'Yes, I certainly will. I think it's time for me do another one.' He agreed it was past time, and that was the genesis of it all. At first, I wanted to do a completely traditional gospel CD of which everybody was all for. But then my son Damon, who produced the CD, thought it would be wonderful for me to look at doing a few contemporary-type gospel songs written by those who were writing for our youngsters in the gospel field today with a great deal of success. And I said I was open to it as long as it didn't go too far into the contemporary area."

One of the few nods at contemporary tastes is the title track, a cover of Kirk Franklin's "Why We Sing". Said Dionne, "I love that song. As a matter of fact, I call it my personal testimony whenever I do it in my performances, and I'm sure Kirk views it as his testimony too. There's no other reason that we have [to sing and perform] aside from the big guy in the sky!"

Dionne has now reconnected with her original church in Newark. "It's absolutely [like family]. The older church mothers are still there and the kids I grew up with in my church choir are there. With them, I'm just Dionne. No special treatment at all! I just thank God they've all been very, very supportive."

im paray for you