Dogs Of Peace: Peace breaks out

One of the hottest new rock albums is the debut by DOGS OF PEACE made by two 30-something studio veterans. Jan Willem Vink investigated. 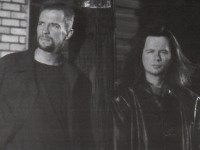 Although the moniker Dogs Of Peace may be new to the world of Christian music at large, the respective people involved, guitar player Gordon Kennedy and bassist Jimmie Lee Sloas are by no means newcomers. 'Veterans' would be a more apt description for these musicians, who have both a background as part of well known groups like White Heart (Kennedy) and The Imperials (Sloas). In the past few years, they've worked with numerous artists in the studio, as musicians and producers. Their first Dogs Of Peace release is simply titled 'Speak'.

Through the years, Gordon Kennedy and Jimmie Lee Sloas began crossing paths, working on various projects in the studio. Quickly, a mutual friendship developed. Gordon: "When you are in the studio together, it is hard to not be an instant admirer of someone with the talent Jimmie has. And then to get together and it's just laughs. We each have a couple of kids. We were actually born two weeks apart, and have a lot of things in common. We just have a blast together and for somebody to give us a chance together on top of that relationship already existing, you can't beat it, it's the best."

"So who's the older one?" I ask the two. "He is two weeks older than me," responds Gordon. Throws in Jimmie, "There is a whole lot of wisdom that happens in two weeks." It's obvious that the two have a lot of fun together, a fact which became very true when I was able to see the Dogs Of Peace perform live in the Hardrock Cafe in Nashville. You rarely see people with the experience of the likes of Jimmie and Gordon perform with so much fun.

Chances would have been that the Dogs Of Peace would have become a completely different band. Originally the two were shopping for a deal in country music. Comments Gordon: "Well, yeah, growing up in Nashville and some of our likes/tastes involved country music and that's what my father has done for a quarter of a century now here in Nashville. We thought since it was in our backyard we might take a stab at it and see what happens, but we found out that the country community here felt like what we were doing wasn't really country and let us know that pretty quick. And then about the same time we started figuring that out, this opportunity was presented to us. Sparrow is aware of the things that we do, from working on a lot of other artists from their roster. They just asked us to do this ourselves."

The Dogs Of Peace feel very privileged by the opportunity that has been handed to them by their record company. Playing live together is one of the things they're looking forward to most of all. Says Jimmie: "To play live is a great privilege, a lot of times studio musicians don't get. And year after year, playing in a studio, although it is fun, it is a blast, and we get to work with some great talents. Personally, for me, I miss playing on the road.

Live gigging helps your studio work in a great way. It freshens it up. On a spiritual level I feel like the band is together, hopefully just to say something that maybe will minister to some people, some kids, maybe some older people, regardless of age. Maybe there is something that we have gone through, maybe in some small way we can shine a light back to Jesus, back to God and that is where the name comes from even. If we as Dogs Of Peace can get a little better view of who God is and maybe someone is lost and we can kind of guide them back. And I'm sure down the road we need that same help. I want to help some people out. I want to say something, hopefully, maybe play something, maybe have the kids feel good in a different way, show them that a song can be enjoyed, without the bells and whistles."

In their lyrics, the Dogs Of Peace very much take a conversational approach. The song "Thrown Away" is an example of that songwriting approach. Explains Gordon: "That is a song idea Jimmie came up with. In fact he played it to me and he had a verse with a bit of lyrics. He played it to me to see where it could go and then he wanted to pitch it to another band he was producing. When we added the chorus to it, we looked at each other and said, 'Close the door! We don't want anybody to hear it, this is going to for the album we are working on.' 'Thrown Away', like much of the album, is very conversational in its lyric. There seem to be more than a few songs that seem to be dealing with a conversation of some sort. We even thought for a while it could be the same character, although each song could be different too and maybe representing different points in our lives where we were in these situations. But in the conversations basically the person singing the song is throwing a question out, or like in this case this person has made too many mistakes to expect any leniency. He just lets go then the response back from God in those situations is, 'Hey, I'll take all the things that you've done wrong and all the records kept of those things and set those free, and you're free.' There is more than one song on the album that presents itself, but again conversational is the way the album sort of presents itself. That is a good example of that."

We finish our conversation with discussing PFR. Jimmie Lee Sloas has been producing all of their four albums to date, and Gordon Kennedy has written a couple of songs for them. He even commented once that PFR is the sort of band he always wanted to play in. "Absolutely," says Gordon immediately. I ask him if that's the underlying reason he is working with their producer... Responds Gordon, "You know, I told Jimmie today for a while I wasn't hearing anything that was exciting to me, until I heard 'Do You Want To Know Love Tonight', off their first album. Then I said, 'If music is going that direction, then I want to be a part of it and maybe I'm not finished with my contribution to this whole picture yet.' And then the next thing I know is I'm invited with Jimmie and the guys on some of their projects."

You know what guys?
I wasn't adjusting well to Christian music in 2002.
Then I found hope in Dogs of Peace becoming a Christian equivalent for Pink Floyd fans.
I hope you guys are okay, because you are it!
Please... Bring it!
Shalom out passed the Dark Side of the Moon.