Domenico Scarlatti: Renowned for his expertise on the keyboard and such works as "Stabat Mater" 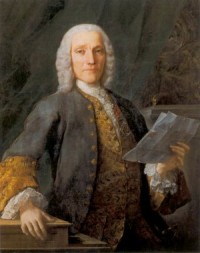 In the MGM cartoons (Tom and Jerry), Tom would often be seen strolling onto a vast stage to rapturous applause, nose in the air, hair parted and Brylcreemed, wearing the obligatory evening jacket and taking his seat with a contemptuous flick of his tails. Then, interlocking his gloved fingers and bending them back until they popped, he'd draw himself up to play some excruciatingly difficult piece that would have Jerry bouncing off the felts like a ping pong ball. Some 200 years before MGM were a twinkling irritation in Walt Disney's wallet, Domenico Scarlatti's cat 'Tiddles' (for the sake of argument) - frustrated, along with the other 99% of the Baroque cat population, that Whiskas had not yet been invented, decides to vent his feelings on the harpsichord. With a cry of "Play it again Tiddles!" Scarlatti was on his feet - manuscript in hand, jotting down the subject (Theme tune) for the keyboard piece now known as the 'Cat's Fugue'....or so the 18th century publisher Clementi would have us believe.

Scarlatti grew up in a musical family, the sixth of ten children and son of the famous teacher/composer Alessandro Scarlatti whose opinion of wind players is here noted to keep them humble.. On being asked to teach the famous flautist Johann Hasse, Alessandro Scarlatti was heard to say "My son, you know that I cannot endure players of wind instruments, for they all play out of tune!" ...Cats, however... The 18th century was an era of 'Patronage' - that is to say, if you wanted to survive as a musician, you had to find employment with a rich household/noble family, or with the church, and positions were hotly contested. In his time, Scarlatti found employment both with the church in Rome and with the Queen of Poland, 'Maria Casmira'. The obvious shortcomings of this system were that any music produced had to pander to the tastes of the person with the purse - not unlike the modern/record company relationship!

Domenico Scarlatti's main claim to fame is in his keyboard works, in which his technique and innovations laid the basis for keyboard players ever since. He invented new effects like crossing the hands (probably due to trying to bat the cat off the keyboard with his left hand whilst he was still playing with his right!) A respected harpsichordist of his day, Thomas Roseingrave was said to have met Scarlatti in this way..

'Being arrived in Venice in his way to Rome, he (Roseingrave) was requested to sit down to the harpsichord and favour the company with a Toccata.. and, says he 'Finding myself rather better in courage and finger than usual, I exerted myself.. and fancied by the applause that I received, that my performance had made some impression on the company....' After a cantata had been sung by a scholar of Fr. Gasparini, a grave young man dressed in black and a black wig, who had stood in one corner of the room, very quiet and attentive while Roseingrave played, being asked to sit down to the harpsichord, when he began to play, Rosy said, he thought that ten hundred devils had been at the instrument. The performance so surpassed his own, and every degree of perfection he should ever arrive, that, if he had been in sight of any instrument with which to have done the deed, he would have cut off his own fingers. Upon enquiring the name of this extraordinary performer, was told it was Domenico Scarlatti...'

Fingers intact, Roseingrave brought back his impressions of Scarlatti to England resulting in what was later known as the 'Scarlatti Sect' which counted amongst its members the greatest Hymn writer to have lived - Charles Wesley. Handel also had a deep respect for Scarlatti, after the two had found themselves equally matched in a keyboard contest - Scarlatti judged best on Harpsichord, Handel on the Organ. The cat wasn't placed.

In 1714 Domenico Scarlatti became church Maestro to the Portuguese ambassador to Rome, and one year later to the Vatican where he wrote the two Misereres and the impressive Stabat Mater in ten parts (About Mary at the foot of the cross).

An incredible poverty of information on his life and travels makes it impossible to determine what his attitudes to the church and church music were, outside of the respect that it commanded in any Italian of the time, other than works like his last 'Salve Regina' (Save Queen (of Heaven)) which shows a great depth of feeling. One of the few details of his life that we have is that he was prone to the odd flutter on the Gee Gees (or anything else that moved!). His long - suffering patron got him out of trouble on more than one occasion as the castrato Farinelli reported...

"..an agreeable man in society, was so much addicted to play, that he was frequently ruined, and as frequently relieved in his distress by his royal patroness, the Queen of Spain, who was in constant admiration of his original genius and incomparable talents."

It was not unusual for members of the clergy to be inclined towards gaming in 18th century Italy either.

In our present age we often forget how fortunate we are that church music is disestablished and that it comes as much from the heart as from the head. Scarlatti and his predecessors and contemporaries were not so lucky, constrained to write whether or not they wanted to..(Look at Bach's prolific output for the church). He often had to break the rules to exercise some artistic freedom, as Dr.Burley recalls.." Scarlatti's were not the only pieces with which every performer displayed his powers of execution, but were the wonder and delight of every hearer who had a spark of enthusiasm about him, and could feel new and bold effects intrepidly produced by the breach of almost all the old and established rules of composition." Unlike Scarlatti and his contemporaries we have freedom from patronage or allegiances that we have not chosen for ourselves.. like the cat exercising its own prerogative to jump onto the keyboard as an expression of what it was....'Created'.. 'Good' in the eyes of God....a CAT!

SCARLATTI'S LIFE
Born in the same year as Handel and trained initially by his father, his first position at the age of 16 was organist/composer at the royal chapel in Naples. In 1702 he was given leave to travel with his father to Florence but he returned alone to Naples a few months later where he turned his attention to composing for opera, producing three operas for the Teatro San Bartolomeo; Ottavia ristitua al trono, Giustina and Irene. Failing to get a court appointment Domenico travelled to Venice where he studied under Gasparini. Whilst he was in Venice, at the age of 23, Scarlatti met Handel. They became, friends travelling on to Rome together where they both played for the patron of music and arts - Cardinal Ottoboni. In 1709 Domenico entered five years service with Maria Casmira, Queen of Poland, composing several operas for her over the next five years. When Queen Maria left Rome he became Maestro di cappella to the Portuguese ambassador and, in 1715, Maestro of the cappella Giulian at the Vatican. He resigned in 1719 to travel but there is little evidence to show where he went. Around 1720, Scarlatti went to Lisbon as Maestro to Princess Maria Barbara, later Queen of Spain. He was knighted in 1738. In 1739 his wife died, leaving five children. He remarried some time later to Anastasia Mazarti, with whom he had four more children. He died on 23rd July 1757 and was buried in the Convento de San Norberto. Recommended Recordings Trying to locate recordings of the sacred works of Domenico Scarlatti is like trying to find the proverbial 'needle in a haystack' of his keyboard works. Only two conclusions can possibly be arrived at... either the cat ate all the manuscripts, or the record companies sadly favour the more saleable harpsichord sonatas!
Anyway, after much searching In dark alley's and seedy record shops - here follows the needle complete with accompanying haystack.