In that tireless tribe of singer/songwriters committed to communicating biblical truth to Britain's children one figure has risen over the past 15 years to become a favourite with kids, parents and Christian retailers. Doug Horley has come a long way since his years as the guitarist in the Noel Richards Band and though many worshippers will recognise Doug's name as the composer of the classic "We Wanna See Jesus Lifted High" (or "We Want To See Jesus Lifted High" in politer circles) it's Doug's tireless work in children's worship which has brought him the gratitude of large numbers of kids and parents not to mention appreciable CD, DVD and songbook sales. As plain Doug Horley and under his zany persona of Duggie Dug Dug, the Epsom-based musicianary has seen albums like 'Whoopah Wahey!' (2000), 'Lovely Jubbly' (2002), 'Fandabidoozie' (2003), 'Okey Dokey!' (2005) and 'Flabbergasted!' (2008) good sellers in Christian retail. And now the children's ministry veteran has stretched his creative reach even further with Kingsway's release of the hugely ambitious DVD 'Duggie Dug Dug Goes Wild' and Canaan Press' equally impressive full colour children's book Seriously Awesome Animals.

I started my interview with Doug by reading to him a statement he made in 1999 in Cross Rhythms magazine. Then he'd said, "I do think that children's work is still viewed in some quarters as a very nice babysitting service taking place out of sight." Did Doug think that the situation was any better in local church circles today? He replied, "I think it has changed a lot because there are more pastors or workers full time dedicated to children and youth work, and the Church has started to recognise children's work and their place in church. If people put their money behind it then it speaks volumes. But sometimes I think the projects don't always get the budgets or profiles that they deserve, but overall there have been many important changes."

Down the years Doug has been greatly influenced by another veteran of children's ministry, Ishmael, who is widely acknowledged as the praise party pioneer. Said Doug, "Ish remains an influence and he has stayed a really good friend. We often talk, and he's been a great friend and mentor helping me to shape what I am doing. Just having someone who understands children and ministry and the various challenges that come with it is great. He's awesome!"

I asked Doug whether he still occasionally sings "We Want To See Jesus Lifted High" in his sessions. "Yes, I think it's an example of where someone is linked to a song forever! 'We Want To See Jesus Lifted High' has opened so many doors because people who may not have heard of me have heard of the song. And that's been great. I'm very grateful to God for that and humbled at how people have used the song."

Despite being the composer of a classic adult worship song today Doug's work is largely focussed on kids. Explained Doug, "I aim most of the events at five to 11 year olds. But I also do family services or all age services where adult worship is part of that. So it's fair to say whilst my main focus is children and parents and carers, I do a lot of all age work." 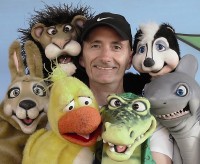 One of the features of all age worship is songs with actions (Doug has in fact produced three volumes in an Action Songs DVD series). Doesn't he often come across adults like myself who find putting our hands together in a triangular shape to indicate the "strong tower" we run into extremely embarrassing? "I fully understand that some people don't like that sort of thing. What I have found immensely powerful though is the use of British Sign Language. It helps to keep children's attention in quiet periods. I have worked with some professionals who have helped me to put signing to songs I have written, or based songs on some of the actions within sign language. The knock on effect is that people will do BSL because it is a language, but doesn't involve jumping around. There are some songs, one called 'Glory And Honour', and I've used those hugely with all age services. They aren't really children's songs, but the children will stay engaged and some adults join in too. I've been amazed to see children aged three to adults at 93 joining in."

Doug went on to talk about what is by far his most creatively ambitious DVD, 'Duggie Dug Dug Goes Wild'. "Having written so many animal songs, it has always been in the back of my mind to do something about animals. Last year, with Darwin's anniversary there were many programmes about wildlife and how the world came to be. But I was concerned that none of those gave any credit to God, with the message that these are all here without God. I wanted to do something to give children the other side of the argument to counter some of that thinking. I thought about a TV show, with live animals, cartoons, children in the studio, songs, puppets and things like that. That's where the DVD idea came from. We filmed at a zoo in Bristol called Noah's Ark Zoo Farm. They gave us full access to their animals. The aim was that we were going out to look for the 'World's Hairiest Animal' so it includes comedy sketches and us searching for it. I'd love to see it become a kids TV series with different presenters, but I hope it is a fun TV show. We've also brought a book out to go with the DVD called Seriously Awesome Animals. The idea is to compliment the DVD, with the message that we have a creator God who made this amazing world."

The vividly illustrated, full colour Seriously Awesome Animals definitely does that. The 98-page book is a veritable visual feast of comic strips, games, puzzles and Bible truths that would hold any kid's attention. As for its author, this tireless worker is as busy as ever. "I do loads of live events, 90 to 100 a year. I run with a set of songs but it changes with new songs being introduced and old songs come back. I've been using some animal theme songs recently which I really enjoy. I have a specially adapted vehicle so I can take six people with me. We adjust who we take depending on the type of show or the church budget. I have a break dancer, a tech person, other puppeteers and dancers. I've also teamed up with an animal handler who comes with me to Wildlife Praise Parties to give some children the chance to be hands on. The grownups have enjoyed it as much as the kids I think! But at the heart of the exciting family event is a Gospel message about our creator God."

Doug admitted that a roomful of shouting and jumping kids can be a considerable challenge. But he seems to thrive on it. He said, "It's certainly noisy at times! Kids are obviously lively and you don't often know what is going to happen next, and I actually quite like that. One of the skills you pick up is how to calm down a group of kids, as Praise Party is very fun and fast moving, but there are times you want them to stay quiet. Doing visual things to grab their attention so that they want to listen is very important."

Despite all the fun times with animals - both real and puppets - the Wildlife Praise Parties have a serious spiritual intent. "I see myself as a songwriter and also as an evangelist. I try to give a Gospel message at most of the events we do, and it's great to see children responding to it. One of the privileges of the things that I do is that you start to meet people who became Christians at your events; some may actually have children now. It's thrilling that an event you did some years ago had that impact on someone's life. It's such a privilege to have that opportunity."