Dwayne Tryumf: Squeezing the whole of the Bible into a single rap 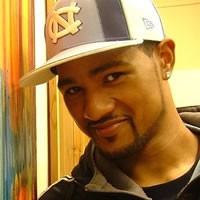 As all Cross Rhythms radio listeners who've been stunned by the dazzlingly fast wordplay on Dwayne Tryumf's "777 Intro" single will know, the London-based Tryumf is no ordinary rapper and his is no ordinary download single. Although it didn't quite make the Top 75 at which it was pitched "777 Intro" did further cement the reputation of the MC/producer as one of the keenest talents in the whole gospel hip-hop underground. Dwayne spoke recently to Mike Rimmer about his extraordinary single. He said, "I've tried to encapsulate the message of the Bible in a rap - Genesis to Revelation. I want to show the bigger picture, to show people this is what the Bible is all about - to give the Bible in a nutshell."

Dwayne feels strongly connected to London's Christian grime and hip-hop scene. "I gotta lot of love for the guys who are doing the whole grime and hip-hop. We're like a family. When we meet up it's a beautiful thing, we're like brothers, we can encourage each other, we can laugh, we can joke and we can talk about the Lord and what we are experiencing in the industry and the scene itself. It's growing and I'm just glad to speak to some of the younger ones coming up and show them the pitfalls and where I went wrong and things I had to go through."

The recent MOBO awards to first Jahaziel then Victizzle show that recognition for the underground is steadily growing. Dwayne feels it has real potential to cross over into the mainstream. "It will make people aware that there is a Christian scene and that it can cross over. That we can make good music of a high standard and it doesn't have to compromise. We don't have to compromise our faith or what we believe. We can still preach the Gospel, still put the truth in our music and still cross over hopefully. You can hit number 75 if 1500 people download it, so it's a David and Goliath thing. I got a sling and a stone and I'm trying to knock out this Goliath."

Born and raised in Clapham, London, Dwayne Shorter, as he was then, has been involved in music production and rapping since 1997. His involvement with music began in a secular rap group called Magic Circle which featured UK artists such as Marga Man, Blackout, Chris Smoove and Don P (Pierre). Dwayne became a Christian in '99 and his music took on a change in direction. From then on doors opened up for him by way of collaborating with another member of his former group who also came to the faith. The two were known as Dwayne & Wayne and they began doing shows at many churches around London. 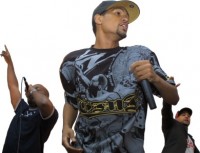 In 2003 Dwayne began working at the recording studios of London-based reggae specialists Jet Star Records and produced tracks with a number of reggae artists such as Lloyd Brown, Don Ricardo, Osmond Collins, Savanah and reggae superstar Greggory Isaacs who heard Dwayne working on a beat at Jet Star and immediately began writing some lyrics for it which became the song "Egg Inna Di Red". During his sojourn at Jet Star Dwayne had his first album released, the dancehall various artists set 'Incense Rhythm' which featured such cuts as Osmond Collins' "God Is In Control", "Big Him Up" by Predestined, "That Feelin' Again" by Zion Noiz featuring Donna Marie (Zion Noiz being a loose hit collective of London gospel rappers that included Dwayne) and "Can't Nobody" by Meleka featuring Tryumf. 'Incense Rhythm' sold 3,000 copies in three months and even picked up sales and interest in Japan! But Dwayne was expanding beyond dancehall reggae and, leaving Jet Star, released his debut hip-hop album 'Ghetto Scripture' (2005). It was a powerful debut, from its telling riposte to the music biz on the intro to "Ghetto Scripture" ("This industry got so cold we could ice skate"), a call for spiritual reality on "The Rapture" ("Christ is real/Don't be an actor") and guest appearances from Zion Noiz friends Jahaziel and Judah.

Over the next three years Dwayne engineered and produced tracks for such gospel hip-hop acts as Greenjade, Jahaziel and Four Kornerz as well as working with mainstream UK artists such as Big Brovaz and AC Burrell and also produced music for MTV Base and MTV Africa.

In 2008 Dwayne released an EP, 'The Mark of The Peace'. Like its predecessor it contained powerful biblical declarations, like on "Right Now" ("We're in the last days, many will offend you/But he who endures to the end will be rescued/He will allow certain things just to test you/When evil abound he swings it to bless you"). But possibly the most impactful track on 'The Mark Of The Peace' is "I Don't Pack A Matic". Dwayne told Gospel Link magazine, "I wrote 'Matic' because at the time I was heavily involved in evangelism in London and it was burning on my heart so much that it was expressed in the song. I felt the spirit of evangelism and soul winning during the time of writing the song. One of the believer's five crowns mentioned in the New Testament is the Soul Winners Crown or the Crown Of Rejoicing (in 1 Thessalonians 2:19) which is the crown you receive as a reward for leading souls into the Kingdom. There will be rewards in Heaven, something that I find the Church today has neglected to mention."

Now all discerning gospel hip-hop fans are waiting expectantly for the '777' album. Dwayne told DaSouth.com website, "I have been working on '777' for two years now. It has a lot of sweat, tears and pain in it. Some of it was written while I was in Germany, some has US collaborations, some of it was even produced in Dubai in the Middle East! So the album is gonna have an international sound to it. '777' has a lot more thought gone into it. The first LP and the EP were not as planned as '777' is and they were completed in less time. Production comes from myself - Tryumf Productions; Theory Hazit, I love what he did; Sixth Sense Productions, who also produced on Lecrae's 'Rebel'; Ian Copeland Green, who is a big time producer; AC Burrell, a long time friend since college who has had hits in the top 10 UK national charts. The features are from mostly UK artists - Jahaziel, MOD, Reign Of Fire, Ryan Carty, Tyrone Henry, Sister Jones, Nathan Prime and more. My goal is to let the heart of God be heard through my album and let the world come to know him better. I want his sovereignty to be displayed through this album and his mighty miracles to be worked through this album. If God can use a sling and stone, a donkey jaw bone, a handkerchief, a staff then surely he can use a CD to work wonders. '777' has many implications but all point to the Sovereignty of God. The first three subjects of Genesis 1:1, God, Heaven and earth, total 777 in Hebrew numbers. The Bible is full of amazing mathematical encryption that was evidence of God's sovereign hand at the time of writing. I believe that God's sovereign hand will be discovered in this album also."

I would love to get him here for a youth service.

loved it you have a great voice you are so cute

Dwayne's new single Never Be the Same is out now on iTunes. Get a copy because it's really good y'all. I got a feeling its even faster than the 777 Intro so brace yourselves. I got the lyrics for verse 1 btw. Visit: http://www.dasouth.com/news/24-news/2479-hear-dwayne-tryumfs -single-qnever-be-the-sameq

loving da track....got it on repeat on my ipod! yeah yeah